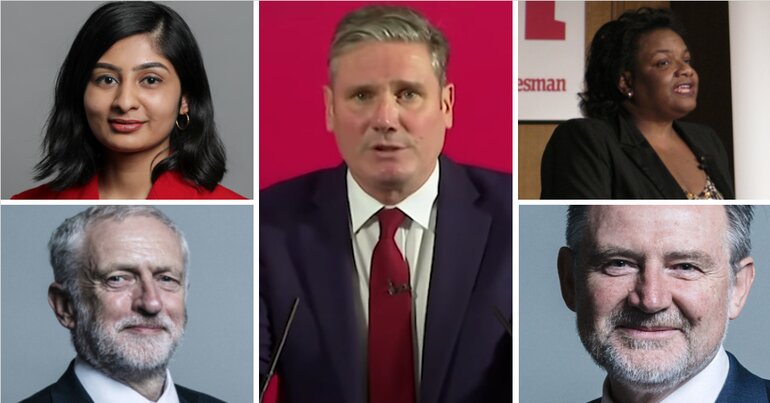 Keir Starmer has suspended Jeremy Corbyn from the Labour party, despite a 17-month investigation by the EHRC finding no evidence of antisemitism attributable to the former leader. But even worse, Sir Keir appears to have launched a full Stalinist purge of left-wing MPs from the Labour party.

Not satisfied with repeated purges of left-wingers from the party membership, they’re now locking down the parliamentary party too. First scalp is the former leader and figurehead of the British Left, Jeremy Corbyn. But it is clear there are many more to come.

The standard approach adopted for the wider witch hunt goes something like this:

We have seen it time and again. Jackie Walker, Marc Wadsworth, Chris Williamson and so on. With that in mind, we now know who’s on the menu for the purge. According to LabourList editor Sienna Rodgers: 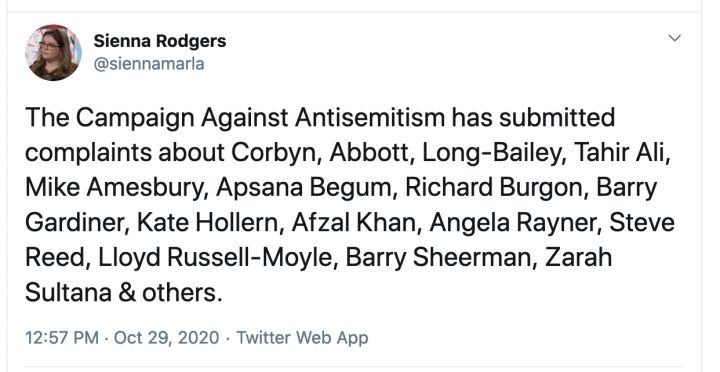 This would constitute a direct attack on the leading left-wing MPs in the Labour Party. The list includes all potential left-wing leadership candidates for the party:

But it also reportedly targets rising stars like Zarah Sultana.

This was always the end game of the chicken coup. And those who warned of it were denounced as antisemites. But this was never about antisemitism, beyond weaponising Jewish trauma to fight factional political battles. That behaviour is unforgivable. It has harmed Jewish people, and the fight against racism more broadly. But it could not have happened without supportive pundits, especially those on the left.

Reminder that Owen Jones was happy to play part of the acceptable "Israel critic" even while promoting the Israel lobby's lies about "Labour anti-Semitism."

I wrote this in 2017 and he's only got worse since then:https://t.co/4KdnSqDHPU

And so I say this: ditch every supposed leftie commentator who went along with this insidious campaign. It doesn’t matter why they appeased the witch hunt. It just matters that they did. They have proven you cannot trust them to stand with you when it costs them something.

There was a chance to prevent this from happening. If Corbyn had backed mandatory reselection, the left-wing membership could have ousted their mutinous Centrist MPs in 2016 and 2017. Instead, he offered an olive branch. He welcomed them into his cabinet, and (his worst mistake) sacrificed allies to appease a rabid smear campaign. His reward was five years of character assassination, abuse, and finally it appears, expulsion.

Now is not the time for remaining Leftists to repeat that mistake.

You don’t negotiate with emotional terrorists. And that is, all politics aside, what these people are. They set out to “break” Corbyn “as a man”. And even after they toppled him, they are not relenting. It’s time to organise and fight. Don’t argue about which method is superior. Just pick one, and give it everything you’ve got.