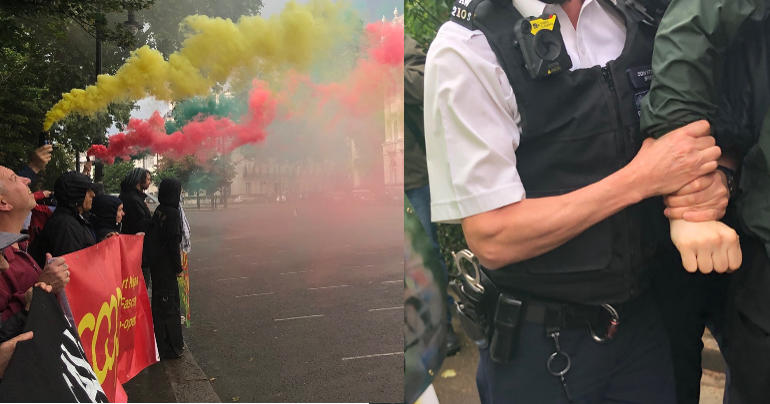 A protester arrested for assaulting a police officer was found not guilty last week. A jury at Southwark Crown Court reached their verdict after watching damning police bodycam footage.

Simon Walker (not his real name) was arrested for assaulting a police officer at a Kurdistan solidarity protest at the Turkish Embassy in Belgravia in June 2019. Walker faced up to a year in prison for the offence.

I was part of the protest, along with fellow Canary journalist Emily Apple. We both attended the three day long trial to support Walker, and to report for The Canary.

Campaigners accused the police at the protest of using “disproportionate and aggressive” tactics to crack down on protesters.

The protest was against the construction of the Ilisu Dam by the Turkish state in Northern Kurdistan. The Canary spoke to Ercan Ayboga, who is a longterm Kurdish organiser against the dam. Ayboga told The Canary that the dam, which is now complete, has directly affected the livelihoods of 100,000 people, 25,000 people have so far been displaced.

The construction of the dam has tragically submerged the beautiful 12,000-year-old town of Hasankeyf.

The jury in Walker’s trial heard from only one prosecution witness who had been present at the demonstration, PC Nicholas Swift. Swift said that he had arrested Walker after Walker had given him a shove while he was dealing with another protester.

The court heard how Walker had sustained a head injury and bruising to his wrists and chest area during his arrest.

However, when footage from Swift’s bodycam was shown to the court, it showed that the officer had waded into the protest in a heavy-handed manner, pushing Walker and several other protesters.

At one point a protester who Swift had grabbed hold of says “Don’t hurt my arm”. Swift replied “I’ll do what I want”, and then continued, “I can use force”.

It was at this point that Walker gave Swift a small push. In evidence, Walker said that he was concerned for the other protester and that the push was intended to separate them. Walker told the court:

If you see someone in front of you and one of them is being violent – or at least you anticipate violence – the instinct is to separate them.

The defence argued that Swift had “unlawfully manhandled” the other protester and that Walker had acted lawfully to defend him. The jury agreed, taking less than an hour to acquit Walker of the charges.

Under cross-examination by the defence, Swift admitted that he had felt “frustrated” at Walker and the other protesters’ failure to move.

When confronted with the bodycam footage, Swift agreed that his actions had not been reasonable, and that if he had seen another officer acting in that way he would have “had words” with them.

After Walker’s arrest, police violence against the protesters escalated, leading to Apple being hospitalised. According to Apple:

Protesters blocked the road outside the embassy. One person was violently arrested. In the process, I was threatened with CS gas and thrown on the ground, sustaining ligament damage to my knee. I am still waiting for surgery on my knee. This was a disproportionate and aggressive response from police officers, who seemed intent on aggravating the situation.

Dragged through a pointless trial during a pandemic

After his arrest Walker was put on bail for almost two years, facing an imprisonable charge of ‘battery’ against Swift. Walker told us that the Crown Prosecution Service (CPS) had repeatedly refused to drop the case, despite applications that it was not in the public interest to continue with the prosecution.

Walker lives in Wales and was forced to travel to London to attend court in spite of the lockdown. Apple travelled from Cornwall as a witness. I counted 25 people in the court room at one point in the proceedings. The risk of spreading coronavirus was very real.

You would be forgiven for thinking that Walker had been accused of something serious in order to be treated like this. However, the evidence in the case amounted to giving Swift “a little push”.

Edward Hollingsworth, the prosecutor in the case, admitted the alleged ‘assault’ was:

fairly small fry, it’s not serious violence but we would say it’s unlawful.

One might ask, why was a case like this ever brought to court in the midst of a pandemic?

The reason the CPS refused to drop this ridiculous prosecution may well be because the protest was in solidarity with the Kurdish freedom movement. A movement that has been increasingly criminalised since several Kurdish organisations were proscribed under the Terrorism Act in 2000.

The move to criminalise the Kurdistan Worker’s Party (PKK) and other Kurdish organisations is in line with the UK’s close ties with Turkey. Turkey is seen as a key trading partner and NATO ally. And yet European courts have insisted on numerous occasions that the PKK is simply a party to an ongoing conflict, not a terrorist organisation.

Several British citizens who have fought against Daesh (ISIS/ISIL) in Syria as part of the Peoples’ Protection Units, or YPG, have been unsuccessfully prosecuted in recent years. The state tried but failed to argue that those fighting for these largely Kurdish forces are guilty of terrorism.

Kevin Blowe, campaigns coordinator of the Network for Police Monitoring (Netpol) agrees that protesters are often prosecuted because of the cause they support. He made the following statement:

All too often we have seen wholly disproportionate charges used as a deliberate attempt to disrupt protests involving international solidarity. This isn’t the first time that campaigners appear to have been treated more harshly because of the cause they support. It is intended to wear people down, alienate potential public sympathies and restrict campaigners’ ability to exercise their rights to freedom of assembly and association.

“Aggressive and unacceptable” response to protest

The Boycott Turkey campaign made a statement in solidarity with Walker saying:

The violent arrest of Simon as part of attempts to break up a protest against the Ilisu dam and the Crown Prosecution Service’s decision to force Simon to attend trial during a global pandemic represent an aggressive and unacceptable response to the protest. The Boycott Turkey campaign stands in solidarity with Simon and everyone struggling against state violence. The use of aggressive policing against protesters is completely disproportionate and we condemn such state violence unreservedly.The Boycott Turkey campaign stands in solidarity with everyone facing state violence and police brutality.

The campaign statement went on to point out the irony of the British state prosecuting Walker over a little push, while at the same time propping up the violence of Turkish president Erdoğan’s regime through its close ties:

Whilst the British state talks of justice, it continues to prop up the unjust regime in Turkey by suppressing attempts to build solidarity with those struggling against the regime’s brutality. The Ilisu dam project has displaced tens of thousands of people, caused untold ecological destruction, destroyed a world heritage site and threatens to restrict access to water for millions of people down-river from the dam.”

The UK Kurdish People’s Assembly gave the following statement upon hearing the verdict:

The fact that this case was ever taken to trial speaks volumes about how those who stand in solidarity with the Kurdish people are mistreated and persecuted by the British state. This is a repeating pattern in the treatment of political protestors in the UK, and a worrying sign of continuing repression of protest and solidarity that specifically targets the Kurdish cause.

The defendant is an anti-imperialist, an environmental activist and friend of the Kurdish freedom movement, and we are relieved to see a just verdict in his case. We extend our enduring solidarity to people fighting criminalisation and unjust prosecution across the world.

Outside court, Walker said that the 18-month prosecution had been “extremely stressful”. He continued:

It’s absolutely outrageous that they would drag not only myself and the defence witness halfway across the country during a pandemic, but also 12 jurors … to oversee a trial this minor.

The whole case has been a circus intended to intimidate protesters and those who defend themselves against police acting violently.

Walker’s case shows that the state’s political prosecutions of protesters are continuing, despite the ongoing lockdown. We need to make it clear that if the CPS persist in bringing our comrades to court during this health crisis, then we will be with them in solidarity.