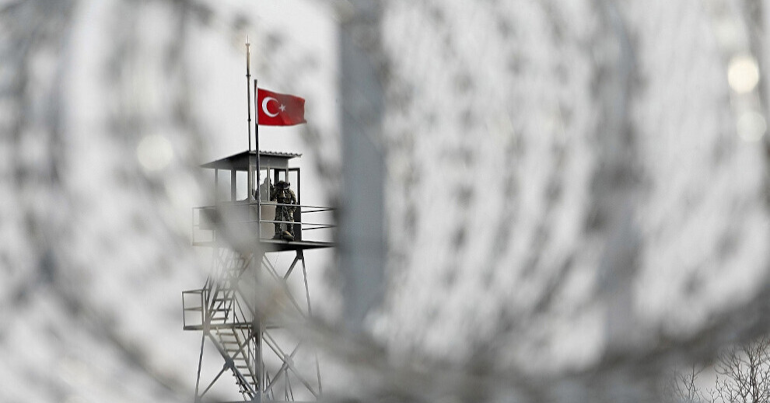 The fact that the first trade deal the UK signed after Brexit was with Turkey is telling. It sets the stage for a post-EU Britain which taps into a longstanding imperial tradition of siding with dictators, despots and oppressors.

Turkey’s dictatorial leader Recep Tayyip Erdoğan, has spent the last seven years since becoming president arresting and imprisoning the political opposition and awarding himself ever-increasing powers. Since 2015, 6,000 members of the People’s Democratic Party (HDP) have been imprisoned, and 16,000 detained. The party’s co-leaders, Figen Yüksekdağ and Selahattin Demirtaş have been jailed. More than 50 elected HDP mayors have been replaced by state appointed trustees.

In December 2020, the European Court of Human Rights (ECHR) called for the “immediate release” of Demirtaş, calling his imprisonment a violation of rights.

Also in December, former HDP MP Leyla Güven was sentenced to 22 years in prison for her role as co-chair of the Democratic Society Congress (DTK). The DTK is the umbrella organisation attempting to sow the seeds of a radical democracy in Turkey’s Kurdish majority south east. A democracy which aims to put the power in the hands of grassroots neighbourhood and city assemblies, eroding the power of the state.

Güven inspired a 7000 person strong hunger strike in 2018 which started behind the walls of Turkey’s prisons and spread worldwide, calling for an end to the isolation of Kurdistan Worker’s Party (PKK) co-founder Abdullah Öcalan, who has been imprisoned by Turkey since 1999. In November 2020, prisoners in Turkey again launched a mass hunger strike demanding freedom for Öcalan.

Meanwhile, students in Istanbul have clashed with police this week while protesting the appointment of a new rector of Boğaziçi University by Erdoğan. The appointee to the post is a prominent member of Erdoğan’s AKP party.

And on 5 January two journalists from a women’s news agency and two freelancers were detained in Ankara, while covering protests. During 2020, 43 journalists were reportedly sentenced to a total of over 150 years in prison.

Propping up the struggling economy of a despot

Turkey’s economy has been struggling under the pressure of the Turkish state’s unending wars of aggression, with the Turkish Lira crashing in 2018. 24% of Turkish youth are currently unemployed.

Amidst this financial crisis, Turkey has launched successive invasions of Northeast Syria in 2018 and 2019, and supported Azerbaijan’s 2020 aggression in Nagorno-Karabakh. Turkish planes and drones have also been carrying out attacks in Libya during 2020, and troops remain on Libyan soil in an attempt to extend Turkey’s influence over the Mediterranean and North Africa. Recently, Erdoğan has been using the age-old trick of trying to distract the Turkish public gaze away from the ongoing financial crisis at home by threatening to exert control over 16 Greek islands.

The trade deal with the UK will serve to prop up the Turkish state’s military expansionism abroad and fuel its repression of the Left within its own borders. The agreement will benefit the Turkish economy by an estimated £1.78bn. Since the announcement of the free trade agreement, the Turkish Lira has risen to its strongest position since September 2020.

In contrast, the European Union is considering sanctions against Turkey, because of its militaristic foreign policy.

‘Self-determination’ and ‘human rights’ left ‘by the wayside’

The trade deal flies in the face of concerns raised by diaspora communities in the UK. In September 2020, a joint open letter was written to Boris Johnson by representatives from Cypriot, Kurdish, Egyptian and Armenian community organisations urging the government to take an ethical stance. It reads:

Whilst the UK-Turkey trade talks progress, Turkey has increasingly become a destructive force in the Eastern Mediterranean and the wider region, that routinely violates international law.

Nik Matheou, a London based historian of the Middle-East and activist with the Boycott Turkey campaign told The Canary:

This deal was what was expected, but nevertheless remains a kick in the teeth for all those who believe in a peaceful solution to the problems in the Middle-East and human rights worldwide.

It just shows what role the British government is looking to play in this post-Brexit world where, on the one hand, the EU has finally and belatedly begun to put sanctions in place against Turkey because of its actions in the Aegean and because of its actions against Cyprus. On the other hand the UK government is making itself entirely open, without any safeguards, without any checks, without any standards being upheld. So it’s really very very disappointing, and no amount of statements about how things are raised in private is going to assuage anyone’s fears here.

Thomas McClure works with the Rojava Information Center, a volunteer-staffed organisation that has reported extensively on Turkey’s invasion and occupation of Northeast Syria. He said:

We often focus on Turkish arms deals with the UK and the West, but that’s only a small part of the picture. UK companies have sold over a billion pounds’ worth of weapons and military tech to Turkey in recent years, including equipment used in their devastating attacks against the Kurds in Syria in 2018 and 2019 – and subsequent forcible demographic change.

But more broadly speaking, with this deal the UK government has shown it is willing to stand alongside Erdoğan’s repressive regime, with the Turkish autocrat fulsome in his praise of his UK counterparts. The UK is Turkey’s second biggest export market, and this deal cements British support for the Erdoğan regime without even cursory parliamentary scrutiny of its appalling rights record at home and abroad.

The EU may be about to impose limited sanctions on Turkey, but at the same time, Turkish trade with key EU states (most notably Germany) continues apace. The UK should have demanded reforms from the Turkish government as a quid pro quo for any trade deal. But with Erdoğan feeling strong and UK and EU leaders running scared, it is little wonder that Johnson’s government are willing to accept Turkish expansionism and repression as the cost of continued profits post-Brexit.

Today’s support for Erdoğan’s expansionist regime will come round to bite the UK tomorrow – but by then, it may well be too late to undo the damage.

“An ethical stance against the exploitation, terrorization and annihilation”

Campaigners are calling for a Boycott of Turkey, as a way to counter its militaristic policies and to stand in solidarity with the movements for radical democracy inside Turkey.

According to Dilar Dirik, Kurdish academic and activist:

Boycotting Turkey is not merely an attempt to economically disrupt a billion-dollar business empire that profits from massacre, authoritarianism and intimidation. It is also an ethical stance against the exploitation, terrorization and annihilation of the Kurdish people and other communities, targeted by the nationalist state mentality of Turkey. Boycotting Turkey means saying NO to the normalization and white-washing of dictatorship and genocidal politics.

The UK-Turkey deal shows clearly the way things are going to go in post-Brexit Britain. The British state will carry on its time-worn colonial tradition of forging alliances with dictators like Erdoğan, who are trying to crush movements for peoples’ autonomy. We need to build up our own autonomy in opposition to state policies, and stand in solidarity with those fighting oppression within Turkey, and globally.