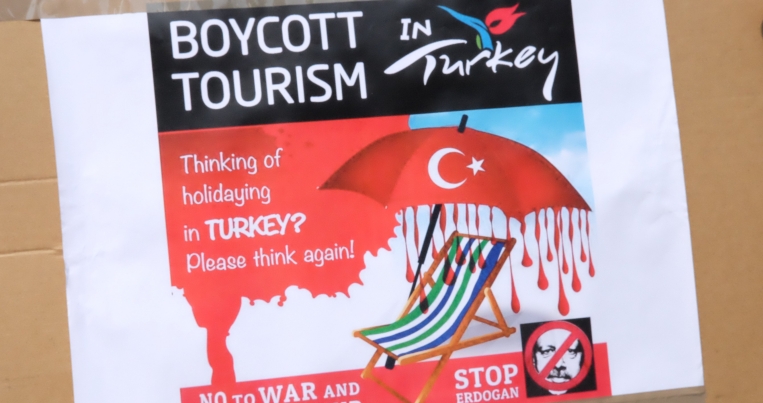 On 18 May, demonstrations were held in several cities around Wales and England calling on holidaymakers to boycott tourism in Turkey.

Kurdish Solidarity Cymru and the Kurdistan Solidarity Network say that tourism in Turkey supports the repressive military policies of the Turkish state.

Kurdish activists have repeatedly called for holiday-makers to boycott Turkey in protest at the state’s crimes against Kurdish communities. Recep Tayyip Erdoğan’s increasingly authoritarian regime destroyed Kurdish-majority cities within Turkey’s borders in 2015, carried out massacres and displaced thousands. Turkey also has the highest number of imprisoned journalists in the world.

In 2016, Erdoğan’s regime jailed and sacked mayors (and high-profile politicians) from the leftist, feminist and pro-Kurdish People’s Democratic Party (HDP) and replaced them with state appointees. Following the most recent local elections in 2019, many HDP candidates won back their seats. But the Turkish state has already opened criminal investigations against some of them and in other areas has ruled the candidates cannot take office. In six areas, this has led to HDP mayors being replaced by mayors from Erdoğan’s party.

The demonstrations were called by Kurdish Solidarity Cymru in solidarity with Kurdish hunger striker Ilhan (Imam) Sis. Newport resident Sis has been on hunger strike for over 150 days.

As The Canary has reported, Sis is among over 7,000 Kurdish activists currently on hunger strike around the world. Leyla Güven, a Kurdish member of the Turkish parliament, began the strike while she was in prison on 7 November 2018. She has continued her strike since her release in January. At the time of writing, Güven has not eaten for 193 days. Both Güven and Sis are now in critical condition.

The hunger strikers are calling for an end to the solitary confinement of Kurdistan Workers’ Party (PKK) co-founder Abdullah Öcalan. Turkey has imprisoned Öcalan for 20 years, keeping him in solitary confinement for most of that time. Öcalan’s ideas inspired the 2012 Rojava revolution in northern Syria.

And the hunger strikes are having an impact. On 2 May, Öcalan’s lawyers were allowed to visit him for the first time since 2011. Then, on 16 May, the Turkish justice minister announced that the ban on lawyers visiting had been lifted. But his lawyers said that they have still not been granted a further meeting with their client since 2 May despite daily requests. They further stated:

It is a legal obligation that Mr. Öcalan establishes his full legal rights, including consultation with his lawyers and visits by his family, to receive letters, telephone calls and his right to other means of communication.

Hunger strikers say they will continue their fast until the isolation of Öcalan is broken and until there is confirmation that his lawyers can visit him regularly.

Early on Saturday TUI’s branch in Roath was plastered with posters explaining why holidaymakers should boycott Turkey: 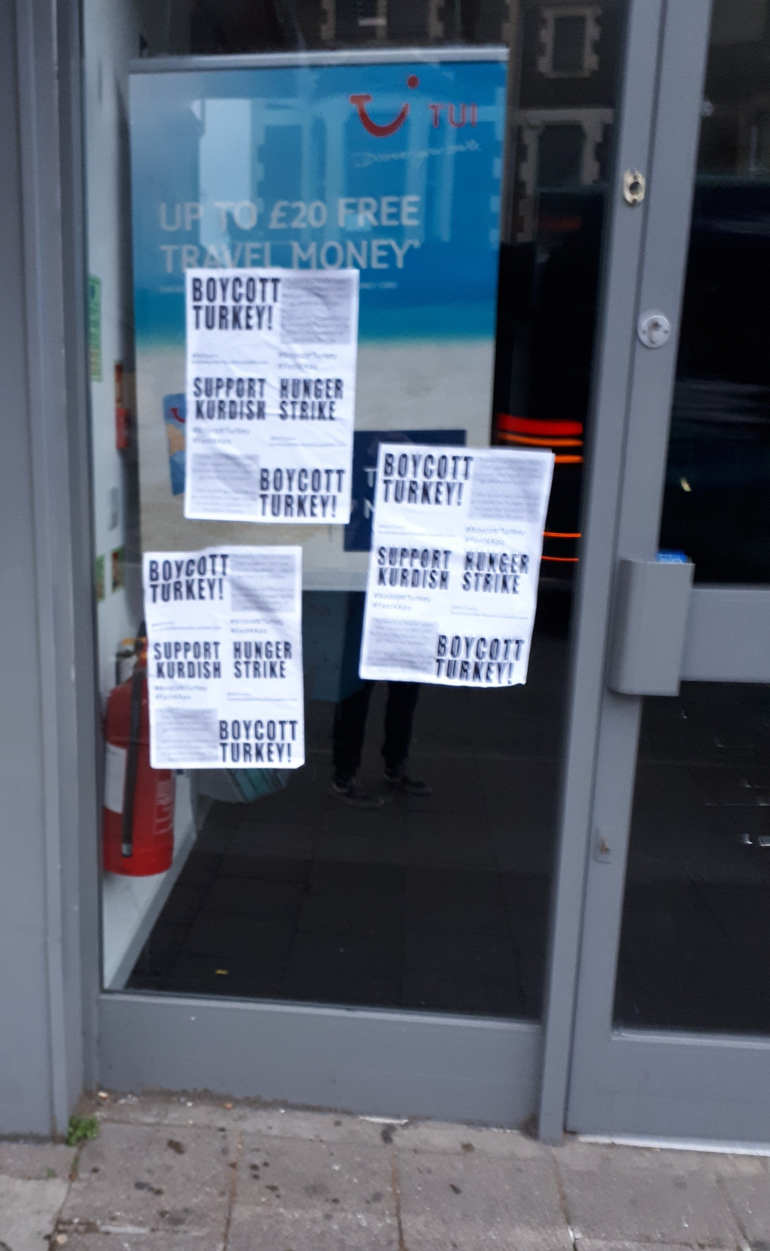 TUI temporarily closed its branch in Bristol as a result of the demonstration:

And lively demonstrations were held in Brighton and Reading.

The Canary contacted TUI for comment on the protests but had not received a reply at the time of publication.

Two weeks ago we had a decentralised day of action to pressure TUI into dropping Turkey from their selection of holidays. Today we had a second day of action with six cities taking part. We are doing this in solidarity with Imam Sis who is on day 154 of his hunger strike. We won’t stop until his demands are met. We hope that people support the campaign by boycotting holidays in Turkey.

One participant in the Bristol protest told The Canary:

Today is part of a national day of action to raise awareness of the hunger strikes. Including [Imam Sis’] hunger strike going on in Newport. We’ve been leafletting outside TUI trying to appeal to people to avoid holidays in Turkey and asking them to boycott Turkey in general. A large percentage of Turkey’s [tourism] revenues comes from UK tourism.

We’ve also been trying to explain to people why Imam is on hunger strike in Newport. That it is because of the detention of Abdullah Öcalan by the fascist state of Turkey for the last 20 years. He is being kept in solitary confinement and denied access to his lawyers and his family. So we’re trying to raise that as a human rights issue and to put pressure on the Turkish government to stop violating human rights.

Some of the demonstrators were also personally inspired by the struggle and dedication of Sis. One woman told The Canary:

It’s a personal and political issue. I’ve met Imam Sis. He’s an amazing person. He brought the light back into my life. I’ve really found out a lot about the revolution in Rojava, about gender [liberation]. The Kurdish people [I’ve met] are amazing, they’ve taken us into their hearts. I want to do everything I can to support them against the Turkish fascist state. I’ll continue to do everything I can to help end the isolation of Öcalan.

The situation of many of the hunger strikers is becoming more and more urgent. But their fight has already inspired more people to join their revolutionary struggle.