71 years after the ethnic cleansing of Palestine, activists call for unity and democracy across the Middle East - Canary Workers’ Co-op 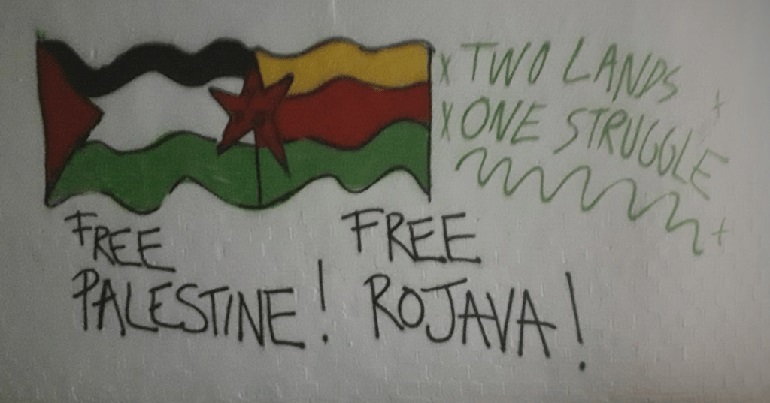 On 15 May, Palestine marked the 71-year anniversary of the Nakba (catastrophe), which saw around 700,000 people expelled from their land and homes after the founding of Israel on 14 May 1948. This was one of the world’s most notorious acts of ethnic cleansing.

To mark the 71st anniversary of the event, internationalist activists working in northern Syria sent a powerful message to Palestine, calling for unity and democracy across the Middle East.

“Solidarity against capitalist exploitation and colonialism”

The Internationalist Commune of Rojava consists of people from around the world who found hope in the largely Kurdish areas of northern Syria for a “new revolutionary perspective going far beyond the Middle East”. In early 2017, the group formed as a “self-organized collective, working in coordination with the youth movement of Rojava”. The ongoing progressive revolution in Rojava sees autonomous communes cooperate together – under the guiding ideology of democratic confederalism. It is a democratic system that is secular, feminist, multi-ethnic, and which opposes all religious discrimination. And it is actively encouraging the growth of an inspirational co-operative economy.

The Internationalist Commune’s message to the Palestinian people on the anniversary of the Nakba was clear. It said:

[We] extend our solidarity to the Palestinian cause, and acknowledge that the struggle in Palestine against the occupation of the Israeli state is one branch of the struggle we have here in Kurdistan to liberate the Middle East from the current system of nation state fascism and return the region to the government of its people.

This system of self government must be one that can overcome the mentality of oppression and division of people along cultural, linguistic and religious lines that is built by the state. A system that is created through communality and solidarity against capitalist exploitation and colonialism.

The Internationalist Commune was unequivocal in its criticism of both the Israeli and Turkish states. It highlighted the common cause between Rojava and Palestine, saying:

It is important never to forget that the Turkish and Israeli states are part of a wider plan in the Middle East, and that whilst there may be public hostilities between the two, behind closed doors they operate under the same banner of fascism and domination. Equally, both are free to pursue their policies of genocide against Kurds and Palestinians alike because of their strategic importance to the imperialist powers of the United States and Russia.

It then stressed that:

similarities exist between Turkish state fascism and the fascism of the Israeli state when we consider the way that settlements have been managed in both Palestine and Kurdistan.

It also argued that:

the creation of freedom through new democratic confederalist structures must include the removal of all oppressive powers whether they are based in Tel Aviv or Ankara.

Finally, the Internationalist Commune insisted that:

Today Rojava shows us, that a system in which the people are living together in peace and sisterhood, defending their different identities together against the state’s aggressions and strategies of division is possible. If we call “to build one, two, three Rojavas” we call for resistance against imperialism and colonialism, but we also call to build many communes in which people can live together, united in their differences.

Indeed, Turkey and Israel have oppressed Kurdish and Palestinian communities for too long. The system in Rojava is worth fighting for. And its focus on fighting against oppression and discrimination is something Palestine and Rojava can unite around.

Featured image via the Internationalist Commune of Rojava