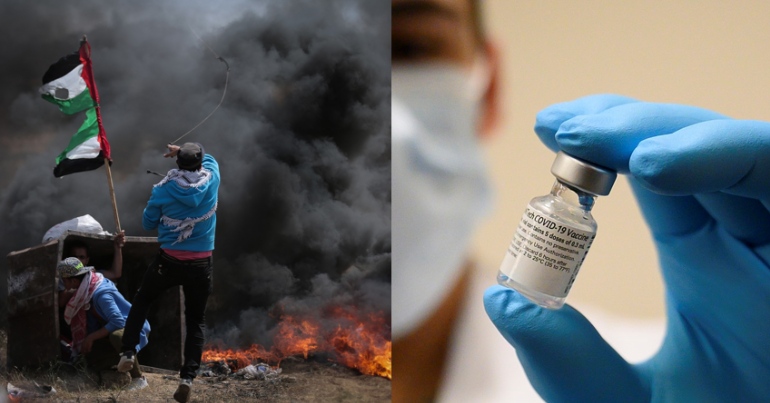 Israel has achieved the startling feat of being the fastest country to administer coronavirus (Covid-19) vaccines. But as we would expect, the beneficiaries have been exclusively its own citizens, not the several million Palestinians who live under Israeli occupation. And one Palestinian leader has given a devastating assessment of what he has dubbed “medical apartheid”.

Israel leads world on coronavirus vaccinations, but only for Israelis

On 6 January, one of Israel’s leading newspapers Haaretz reported that “Israel Is Leading the World in Vaccinations”. According to Forbes magazine, the Israeli government has vaccinated over 14% of its population against coronavirus. The Washington Post noted that this means the country has “inoculated a higher proportion of its population against the coronavirus than any other country”. France 24 reported that one million Israelis have so far been vaccinated.

But behind this rosy picture lies a darker, but painfully predictable, truth about Israel’s vaccination rollout; Palestinians have not been receiving the vaccine.

Multiple human rights organizations have been scathing in their criticism of Israel’s far-right Netanyahu government for failing to vaccinate Palestinians living in the occupied territories. This includes mainstream stalwarts such as Amnesty International and Human Rights Watch. Amnesty’s deputy regional director for the Middle East and North Africa at Amnesty International Saleh Higazi said in a statement:

Israel’s COVID-19 vaccine programme highlights the institutionalized discrimination that defines the Israeli government’s policy towards Palestinians. While Israel celebrates a record-setting vaccination drive, millions of Palestinians living under Israeli control in the West Bank and the Gaza Strip will receive no vaccine or have to wait much longer – there could hardly be a better illustration of how Israeli lives are valued above Palestinian ones.

The Israeli government has already vaccinated 10% of its citizens for the coronavirus, but as the occupying power it has not vaccinated a single Palestinian. That means residents of illegal settlements get vaccinated but not yet the Palestinians next door.

Israel has pointed to the Oslo Accords as justification for its failure to vaccinate on the basis that the responsibility for providing coronavirus related medical services lies with the Palestinian Authority. But Roth shot back:

Blaming the corrupt, self-serving Palestinian Authority is no excuse. As the occupying power, the Israeli government is ultimately responsible for the lives of Palestinians under occupation. It should ensure that they receive the Covid vaccination, not just Israeli citizens.

Of course, Israel’s argument also ignores the brutal realities that Palestinians in the occupied terroritories face on the ground. For example, Gaza is currently facing a devastating blockade that imposes severe restrictions on the movement of goods, services, and people. As The Lancet: Global Health pointed out in September of last year, Gaza’s healthcare infrastructure was severely debilitated even before the outbreak of the Covid pandemic:

The extensive nature of the blockade has had a devastating impact on the health and wellbeing of residents in Gaza. …

The Palestinian Ministries of Health in both Gaza and Ramallah have acknowledged that their capacity to contain the spread of COVID-19 is limited by ongoing and pre-existing shortages in health-care equipment, including medications and disposable equipment.

The blockade of 13 years means that many treatments in Gaza are unavailable and local health-care staff do not have up-to-date medical knowledge. As a result, more than 9000 patients need Israeli exit permits to leave the Gaza Strip each year for treatment that is unavailable locally, a quarter of whom are patients with cancer.

Moreover, Israel is using the Pfizer-BioNTech vaccine, which requires a minimum storage temperature of minus 94 degrees (Fahrenheit). People in Gaza are frequently left without power for half or more of each day following Israel’s bombing of the area’s only power plant in 2014. In the West Bank, things aren’t much better given that Israel continues to control over 60% of its land through military rule.

On 5 January, US-based alternative broadcaster Democracy Now! spoke with Mustafa Barghouti, a doctor who is also a member of the Palestinian parliament and head of the Palestinian Medical Relief Society. Barghouti was scathing in his assessment of Israel’s failure to provide Palestinians with coronavirus vaccines:

Israel actually is violating international law, because it is denying its responsibility as an occupying power. Israel managed to get 14 million vaccines for the Israelis and those who hold Israeli IDs, but gave nothing to Palestinians. So, practically, they are vaccinating 8 million Israelis and not vaccinating 5.3, 5.2 million Palestinians living in the Occupied Territories.

No health professional in the West Bank has been vaccinated yet.

This includes Barghouti himself, and as a result, he has become infected with coronavirus. Barghouti also pointed to the absurdity of expecting people in Gaza to quarantine given the cramped conditions in which many live (Gaza has one of the highest population densities in the world). He added that as a result of this and other aspects of occupation:

An undoubted case of “medical apartheid”

Asked about whether he considers the situation to represent “medical apartheid”, he was emphatic:

Yes, absolutely. This is the worst form of apartheid: medical apartheid. It didn’t even exist in South Africa. This is just beyond description. Imagine you go to a prison: You vaccinate the guards, but not the prisoners; you vaccinate Israeli prisoners, who are criminal usually, and not vaccinate Palestinian political prisoners. Imagine you go in the cities of the West Bank: The settlers are vaccinated, and nearby Palestinian cities and communities are not vaccinated. Not only they grab our land, not only they settle illegally on our land, take away our natural resources, take away our… sources of economy, but also they back this system of apartheid.

Asked what could be done to help remedy the situation, Barghouti called on the international community “to exercise immediate pressure on Israel to allow the passage of vaccines to at least the beginning” and “to provide aid, bypassing Israel”.