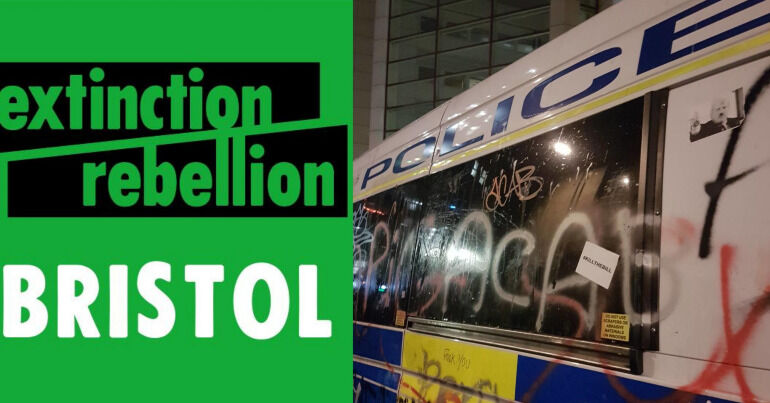 As events in Bristol unfolded on 21 March, and as police vehicles burned, the mainstream media were quick to condemn protesters. And now we are seeing protesters themselves issuing statements, hurrying to distance themselves from the events. Politicians will be rubbing their hands with glee as activists split themselves into two camps, with one morally-superior group demonising the other, and therefore weakening our collective outrage.

In light of last night’s events, XR Bristol emphasises its absolute commitment to non-violence. This basic tenet is one of our core principles, and represents the values of our wide range of supporters, from grandparents to schoolchildren, to doctors, scientists, builders, shop workers, and teachers.

Within their statement they included an image of a past XR action, showing a row of activists dressed in costume facing the police.

The Canary’s Kerry-Anne Mendoza wrote a response to those who were condemning Sunday’s riot. She said:

For many communities targeted by police violence, the white, middle class tendency to treat police as their mates is honestly galling. Those of us who have faced harassment and violence at the hands of police know it’s an institutional issue. We know we shouldn’t trust police accounts automatically. And honestly, given the revelations of past decades, neither should everyone else.

It is surely those with white, middle-class privilege who are most outraged by a few burnt-out police vehicles and a couple of smashed windows. If you’re reading this and feeling anger at these words, check whether you have that privilege. If you do, it’s unlikely that you’ve been very harassed by the police in your day-to-day life. Yes, I am aware that you may well have been arrested at an XR protest, and you may have possibly posted on social media that you did yoga in your police cell.

But if you don’t have white, middle class privilege, you will know what it’s like to live with daily police violence towards you. You know what it’s like to be racially profiled. You may well have been taken into custody, and if you have, it’s unlikely that you’ve felt safe enough to practice yoga. Someone you love may even have been murdered by the police. You will likely be asking yourself, “what’s a couple of burnt-out cop cars in comparison to someone you love dying?”

No, the police aren’t here to help you to “peacefully protest”

An organised protest can have safeguards in place, but Bristol police were warning last week of £10,000 fines for anyone who took an organisational role.

The rally yesterday belonged to no organisation. When XR plans an action we organise stewards and marshalls, including stewards trained in de-escalation, plus a reasonable degree of police liaison. The escalation of yesterday’s peaceful protest demonstrates why it is essential that organised peaceful protest remains legal.

Through XR Bristol emphasising their commitment to non-violence and to “organised peaceful protest”, they are assuming that their method of organising with stewards is the only successful way to bring about change. But this statement reeks of privilege.

For a start, a vast number of people in the UK don’t feel safe enough around the police to ‘liaise’ with them. And while XR Bristol might think this the best tactic, it is a foolish one. Because if you politely ‘liaise’ with the police, they will gather evidence on you and your fellow-protesters to use against you. They are not your friends, despite their often-friendly chatter. Their job is to protect the state, gather intelligence and to defend the status quo.

And even if you do want to ‘peacefully’ protest, there’s no guarantee that the police will let you. Take this person who was beaten up at the Sarah Everard rally in London. He told The Canary:

I am a strong believer of peaceful protesting, and I was just in the demo with some friends from work, when four officers grabbed me from the side, without explanation they put me to the floor. Whilst they were trying to handcuff me I was moving my arms because of the pain and then suddenly 10 more officers were on top of me. There was [an] officer sitting on my back, two officers on my shoulders, and the rest just using unreasonable force on me. They banged my head to the floor, scratched my hands, and the handcuffs were so tight that my wrists were bruised and knees.

We were literally sitting on the floor shouting “this is a peaceful protest” while police hit protesters round the head with batons. At one point it looked like their horses were going to charge into the crowd.

What response did they expect?

We must continue to resist the Police Bill

The government knows by now that its hope of quietly slipping through the Police, Crime, Sentencing and Courts Bill has failed dismally. In fact, their continuous violence towards protesters is just drawing more and more attention to it. If you’re sitting at home in a comfort that others can only dream of, please don’t condemn those who are fighting for our last slivers of freedom. Because banner-waving might not be enough to win this one.

Featured image via Wikimedia Commons / Tom Anderson for The Canary