I'm a GCSE student. The government promised they wouldn't screw us over. They lied. - The Canary 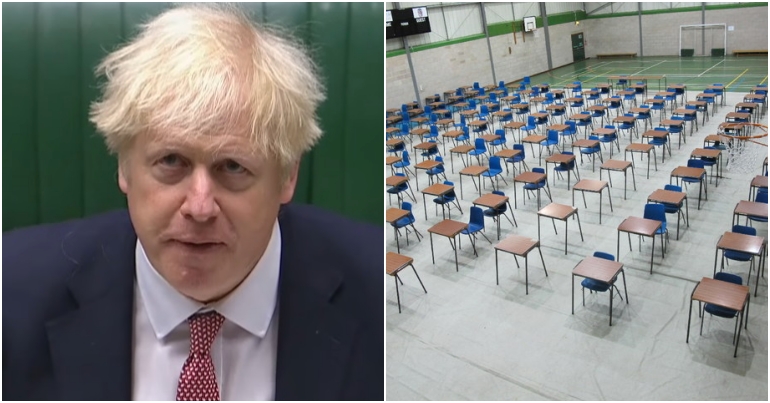 The past two years have been disproportionately difficult for students, with GCSE and A-Level students in particular feeling the brunt. The Tory government has not only not done anything to aid the NHS in fighting coronavirus (Covid-19), it has left GCSE and A-Level students with a cloud of uncertainty and lack of clarification. After initially promising exams were cancelled, it then imposed “mini-assessments” – essentially exams with a different name – on students instead. And the impact on students has been massive.

I am one of those students who was due to take their GCSEs this summer. I have friends who are suffering more panic attacks this year than any other year. I am one of those people, too. There comes a certain point where we need to demand accountability from the government and that time is now. We have passed the point of this being just a mistake the government has made; this is a clear misuse of power by a government with an obvious unsympathetic and callous attitude towards the future voices of this country.

In January 2021, prime minister Boris Johnson announced that it is “not possible or fair for all exams to go ahead this summer as normal”. Since then, the country has witnessed a succession of broken promises. Students listened while their teachers told them their classwork would be the primary source of their teacher assessed grades. It has been a scary road adapting to a completely unfamiliar system to get the grades they deserve.

Young people have shown incredible resilience over the last year, continuing with their learning amidst unprecedented challenges while the country battles with this pandemic. Those efforts deserve to be fairly rewarded.

Disguising this new system as “fair” is an utterly unjust use of words. Especially given a further announcement in February that schools would also be allowed to set optional “mini exams”.

On 22 April, students in my school were told that the very exams they thought they would not be sitting were, in fact happening and starting the following week. What were originally disguised as “mini-assessments” are now formal exams – some of which will take place in exam halls – which schools have to rearrange timetables to make space for.

Exams going ahead will mean that a considerable number of pupils will be at a disadvantage. The current system – teacher assessed grades (TAG) – was first announced on 25 February, alongside optional mini-exams. This created a two-tier system: some schools based their grades on ongoing assessments, where teachers could grade students through a portfolio of evidence, such as coursework, classwork and past mock exams.  Meanwhile, others opted to take exams.

In reality that has meant in the past week many students have been sitting formal exams, with teachers acting as invigilators and students who need support given transcribers and readers. Many have been sat in classrooms in exam conditions; however, due to exam board regulations requiring schools to sit the exam as a whole year group, some will be sat in sports halls and gymnasiums.

The point of cancelling exams in the first place was to relieve pupils of the stress normal exams would cause. So why, now, is the government still going ahead with formal exams?

Students are tired of explaining to the government that they cannot carry on as normal. Missing a year of school in the middle of GCSE and A-Level curriculum has left many fighting for the bare minimum grades. Young people should not have to explain to the government why they cannot sit their exams as normal in the midst of a world pandemic where millions of people have died. But not only does the government think this is acceptable behaviour, it seems to believe this is an equitable system. Students deserve more than this.

I’m ashamed and embarrassed of our country

To be honest, I’m ashamed and embarrassed of our country. I’m not even shy to admit this anymore. I grew up in a community of people committed to loving the Queen and her “service” to the country. We had street parties for the Jubilee, for every birthday and every kind of celebration you can think of. My uncle, before he died, was a sergeant in the Air Force. I grew up under the impression that being patriotic was a good thing. But I’m long past being patriotic. By the time in my life that I eventually broke free of that, I was instantly happier. I was tired of supporting people who couldn’t give a shit about me.

This country is not something to be proud of. This country is one that prioritises middle and upper class citizens and persecutes the poor. This country refuses to feed children in poverty but will fork out £200m for a dead imperial colonialist who spent his life using his whiteness to stain poorer countries. This country is proud of the trauma it has inflicted on war-torn countries, it is proud of imposing poverty on the very people it swore to protect. We are in shambles, and those in power don’t care.