This cat was mauled to death by hunting hounds. It's time to protect all animals from a similar fate. - The Canary 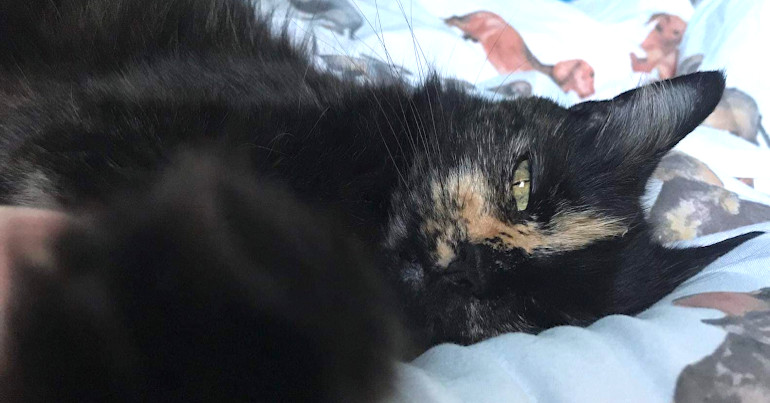 This is Mini, a 14-year-old rescue cat. In March, she was mauled to death by a pack of fox hunting hounds next to her home on a housing estate in Cornwall. The huntsman was caught on film, looking behind him to check if he was being watched, and then throwing Mini’s dead body over a fence into a back garden in an attempt to hide what happened. Mini’s guardian says that the man “launched [Mini] as far as he could get her”, and her body hit a tree as it fell.

Unfortunately, Mini’s fate isn’t rare. A report by Keep The Ban shows that between 1 October 2020 and 4 January 2021 domestic animals or livestock were terrorised by hunts “on average every two weeks”. It’s likely that a number of incidents weren’t reported, so the real figure is probably even higher.

Mini’s guardian is obviously heartbroken by the attack on her cat. She says of the hunt:

Why should anyone be put through this because they want to have fun?

She argues that the hunt shouldn’t have been in the village in the first place:

They had no need that day to come past the houses – near anyone’s animals, anyone’s children – and cause chaos in the village like they had prior… There’s a video showing one of the hounds nearly getting killed on the road by a car prior to them coming past our houses.

But now campaigners are fighting back, hoping to protect animals from sharing Mini’s fate. More than 20,000 people have signed a petition to introduce Mini’s Law: legislation that would “ensure safety to the public and animals from hunting activity”. The legislation would prevent hunting activities from taking place in residential areas.

The hunts place no restrictions whatsoever on what they do; they go where they want and do what they want. The misery of local people means nothing to them.

Mini suffered and died because of the hunt’s reckless attitude, and her family continues to suffer. The damage the hunt did to all of them is permanent. We know that the hunts will never regulate themselves, and their bad behaviour will continue, unless, of course, something changes. Mini’s Law, I hope, is that change.

One rule for the rich

The Canary has extensively covered how hunts all over the country get away with breaking the law time and time again, usually by pretending to be trail hunting when they are actually hunting a real fox. Mini’s guardian says:

They get away with it because the laws are not tight enough… they’re not fit for purpose. Every animal needs protection from them. Every animal.

And it seems to be one law for fox hunters and their dogs, and another rule for the rest of us and our pets. Keep The Ban asks:

why time and time again [do] hunts get away with terrorising animals and members of the public?

The campaign group points out that:

According to the law it is illegal to let a dog be dangerously out of control anywhere, such as:

The law applies to all dogs. Your dog is considered dangerously out of control if it: injures someone or makes someone worried that it might injure them.

You can get an unlimited fine or be sent to prison for up to 6 months (or both) if your dog is dangerously out of control.

Yet it’s extremely rare for hunts to be prosecuted for murdering cats like Mini, or for terrorising foxes, despite there being countless reported incidents of hunts breaking the law. In Mini’s case, the police have now concluded their investigation but a decision on whether anyone will be prosecuted has not yet been made.

With the Tories in power, it may seem like nothing will change. After all, if the state actually enforced its own law and clamped down on illegal fox hunting, Mini’s Law wouldn’t be needed in the first place. But by signing the petition to introduce new legislation to protect domestic animals, we might just force the government to actually listen. For Mini, it’s worth a try.

Featured image via Keep The Ban