The mainstream media's depiction of van life is racist, classist and sexist - Canary 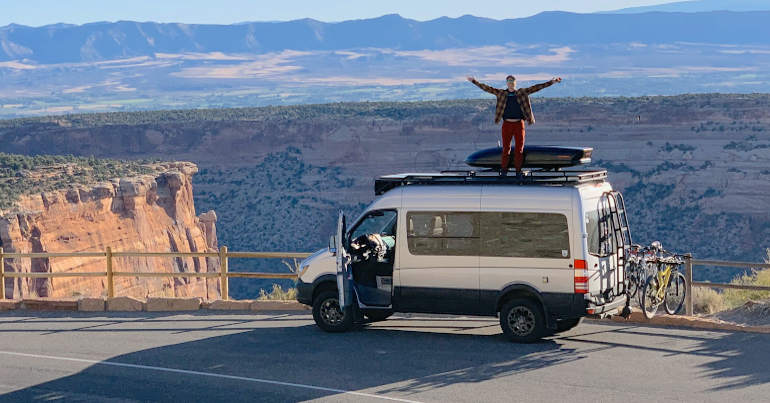 “We haven’t done this because we have no other options. We’ve done it because it’s a better way of life,” 33-year-old Ailsa Gardner told the Mirror. After paying stupid amounts of rent on penthouse apartments, Gardner and her partner now live in a converted school bus.

Their alternative way of living earned itself pride of place in 20 August’s The Sun, too. The newspaper said of the couple:

with their rent costs halved, they gained the freedom to spend more of their lives on the road.

The mainstream media is no stranger to covering stories on van life. There’s also 34-year-old Amy Nicholson, who dipped into her £5,000 savings to buy a second-hand van. The Sun boasts that Nicholson lives life “on the open road”, saves £1,500 per month on rent and pays no bills.

Gardner and Nicholson are just a few of the young women who are gracing the pages of the tabloids, as more and more people take to living in vans. The Sun points out that with house prices booming since the coronavirus (Covid-19) pandemic began, camper van sales increased by 150% last year.

Now, my gripe isn’t with Gardner or Nicholson. If they escape landlords’ clutches and live a lifestyle that gives them more freedom and more connection with nature, that’s great. My gripe is with the hypocrisy of the media, glorifying van life because it is done by young, white people who look socially acceptable, (or are acceptably beautiful), and who are from a socially acceptable class background.

Yet it is quick to vilify van life when it is done by the very Traveller Communities who were born into an alternative way of living. Can you imagine the Sun celebrating that an Irish Traveller saves more than £1,500 per month on rent by living in a vehicle? Of course not.

Let’s compare a couple of tabloid headlines. This first images depict Gardner and her new bus: 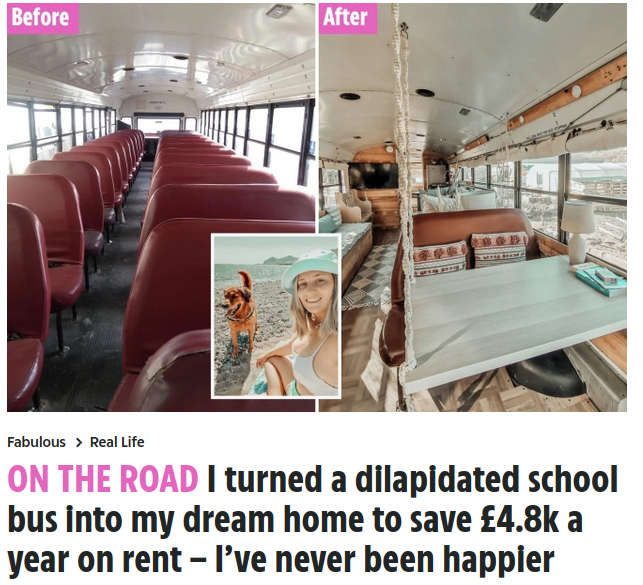 This second image shows just one of many racist and xenophobic headlines about the Gypsy, Roma and Traveller (GRT) community that have graced media pages over the years: 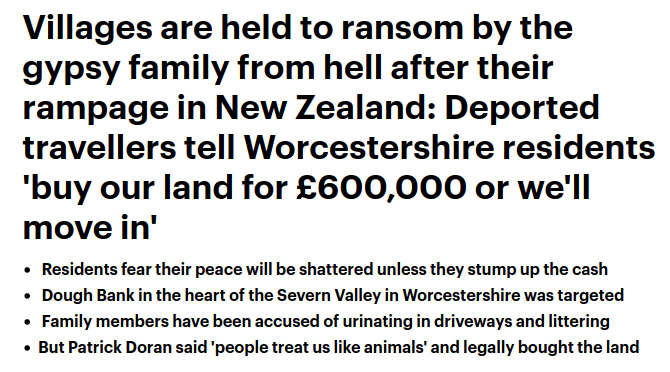 And on 23 August, just three days after the Gardner story, the Sun shouted:

This contrast is nothing new, following on from what probably amounts to hundreds of discriminatory articles about the GRT community; from accusing them of “soaking up the sun…outside £2 million homes” to stealing children. And, of course, there’s the usual rhetoric of Travellers leaving faeces and rubbish behind, while at the same time local councils aren’t providing people with enough sites to live on.

This prejudice is something that the GRT community has to live with daily. And as the media peddles xenophobia, it is therefore responsible for building up public hatred towards GRT people, making life unsafe for Travellers. And the more hatred there is towards Travellers, the more incentive a council has to evict them off land.

On top of this, discrimination and bullying makes it much more difficult for children from the GRT community to thrive at school, or land a good job when they leave school. Whereas I can’t imagine Gardner or Nicholson will have any problems getting job interviews because they have chosen to live in a van.

Through their headlines of prejudice, the tabloids are peddling the government’s agenda: to cleanse our society of the GRT community. The government is currently in the process of passing the Police, Crime, Sentencing and Courts Bill, which will make it a criminal offence in the UK for a person to trespass with the intention to live in or near a vehicle if they have caused, or are likely to cause, significant damage, disruption or distress. And this is where the racist headlines have an impact because “likely to cause” is subjective and feeds off people’s existing prejudices around the GRT community.

Ruth, who is part of Traveller Pride, has spoken out about what the bill means for the GRT community. Speaking at Brighton’s recent mass trespass to fight for our right to roam, she said:

The bill is one government tactic that it hopes will be the final nail in the coffin for GRT communities. This follows on from the tactic of stealing Traveller children from their families and putting them in care, or up for adoption.

Van dwellers need to unite with the GRT community

While new van dwellers such as Gardner and Nicholson are also at risk of being persecuted by the policing bill, it is the GRT community that the government is aiming its legislation at, and who will bear the brunt of the new laws.

As the number of people living in vans increases, it’s essential that this new generation of people taking to the road make links with the very communities who have been persecuted their whole lives for living in a similar way.

If you’re a new van dweller, learn about this history, make the connections, and show solidarity. Get to know GRT communities in your area and be their ally. United together, we can fight racism and prejudice. But it takes all of us to recognise our privilege and stand with those who don’t have it.