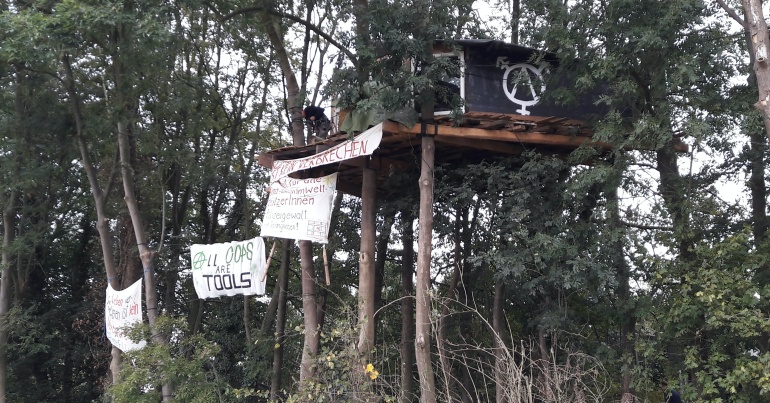 A small earth wall separates the tiny village of Lützerath from the enormous diggers operating in Garzweiler II, one of three opencast lignite coal mines operated by energy company RWE in the German Rhineland.

The mine is 235 metres away, and coming closer every day. A number of houses in Lützerath have already been torn down, the area covered with gravel, grass, and some wildflowers. It’s hard to imagine that people lived here just a couple of years ago. Other houses are fenced off, with RWE security in front, twenty-four hours a day. Most people have resettled and have moved away.

But one farmer is holding out. Eckhard Heukamp is challenging the imminent eviction from his farm in the courts, arguing that the coal mining plans from the 90s should no longer allow for continued extraction in the light of climate change and coal phaseout. He was already displaced once, 15 years ago –when his farm in Borschemich was demolished, the land long dug up. Now he is fighting for his parents’ house and farm, which dates back to the 18th century.

He is not alone – citizens initiatives and groups are organising regular demonstrations, events, and a permanent vigil at the edge of the village facing the mine. Activists have set up a permanent occupation on Heukamp’s land – the ZAD Rhineland. The term ZAD comes from the French Zone à défendre – a militant occupation to stop big development projects. The most well-known ZAD is probably the ZAD de Notre-Dame-des-Landes that stopped a new airport being built near Landes, France, and famously resisted militarised eviction by the French state.

The ZAD Rhineland was set up to defend Lützerath against RWE and the police, and to stop coal extraction in the Rhineland. People are ready to put their bodies in the way in what might be the final showdown, the decisive battle. “If Lützerath stays, they won’t be able to get to the next five villages”, someone tells me. “But it will be hard”.

We spend all day building defence structures. Treehouses, barricades, lock-ons, and towers are popping up everywhere. People are giving climbing workshops and sharing blockading skills, discussing police repression and state violence, building up solidarity structures and a new kitchen, plotting and planning for day X – when RWE comes to cut trees or police show up to evict the camp.

The last big eviction in the Rhineland – the eviction of Hambacher Forst, which was recently declared illegal – ended up lasting five weeks before it was stopped by the courts. Thousands of police officers were brought in, but many more people came to defend the forest. Police were heavily criticised for the brutality with which they treated activists and the little regard they showed for their safety. One journalist died during the police operation, many ended up in precarious and unsafe situations.

This is happening all over Germany – only last year, during the eviction of the Dannenröder forest in central Germany, a protester was seriously injured when he fell four meters from a tripod after police officers cut the safety rope which held the tripod in place. The occupation was set up to stop another ecologically destructive infrastructure project – the new A49 motorway. Another protester, Ella, was sentenced to over 2 years in prison for allegedly injuring a police officer during the eviction – despite overwhelming evidence to the contrary.

The collaboration between police and private security services in the Rhinish coal mining area has been well documented; repression, criminalisation, and violence go hand in hand. Few companies are as powerful as RWE. It’s structurally entrenched in the local political economy, and protected by German police forces who frequently act as private security. Many villages and towns are themselves RWE shareholders, and numerous politicians are on RWE’s payroll. In 1979, the German news magazine Spiegel warned:

Unrivalled and barely manageable, RWE is ruling over one of the largest monopolies of the Western world.

Today, Europe’s largest emitter continues to lobby for continued lignite coal mining – the dirtiest of all fossil fuels. If successful – the German government’s coal phase-out is set for 2038, much too late. Meanwhile, RWE is suing the Netherlands for 1.4 billion Euro compensation for phasing out coal by 2030.

It’s up to all of us to stop climate catastrophe

As politicians are getting ready for the next round of COP negotiations in Glasgow in November – where they’ll talk and achieve little to nothing – people in the ZAD Rhineland know that it’s up to them – to all of us – to stop climate catastrophe.

It might well be that this time, too, the courts will rule that the eviction of Luetzerath was illegal. But by then, the trees will have been cut, the land dug up, the village destroyed.

It’s windy at the edge of the mine where I’m sitting. I’m told this has been the case ever since RWE cut down the trees that once protected the village. And yet, the windmills next to the mine are not moving – the powergrid is overloaded – there’s too much wind, and coal power stations take too long to switch on and off.

The digger keeps moving towards us, ruthlessly. The power stations in the background keep burning coal, generating electricity for a system that requires abundant cheap energy to power endless growth, to generate profit for those in power at enormous ecological and social costs.

The ZAD Rhineland shows that a different system is possible – a system that operates on the basis of solidarity, not competition; of degrowth, not growth; on climate justice, not green capitalism or ecological modernisation. True sustainability needs not just an end of coal, but the abolishing of those who protect coal interests – police, security, prisons – and of the economic and political system they are part of.

Joining the ZAD Rhineland is a good place to start this fight. From 29 October, the ZAD invites all of us to come to the anti-eviction skill share and protest camp, and to stop RWE. Whether you want to sit in a treehouse, build barricades, or cut veggies – please join, if you can. Every body counts.