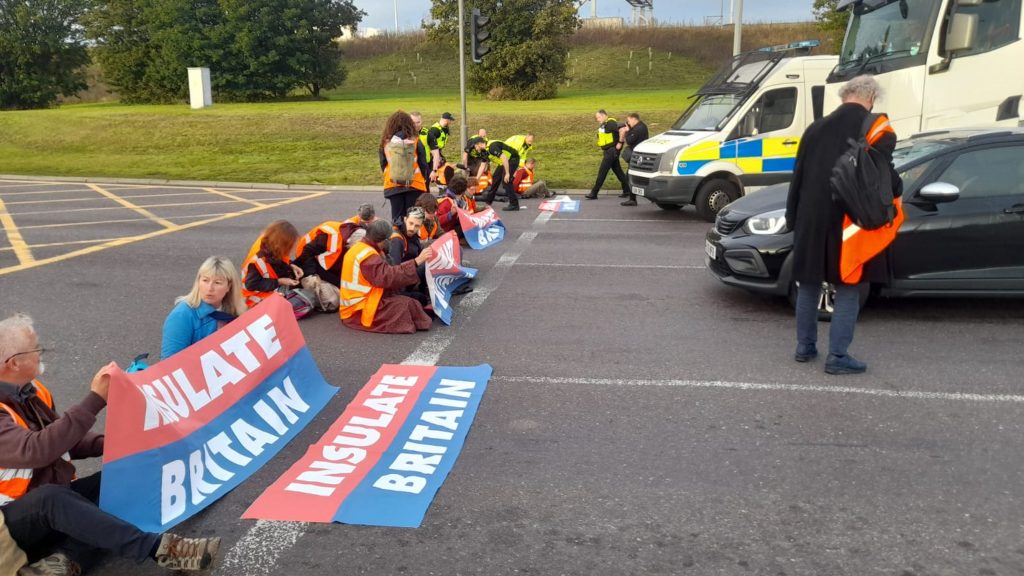 Further arrests have been made after members of Insulate Britain blocked roads for a thirteenth time, despite injunctions granted by the High Court. Protesters are demanding that Boris gets on with the job of insulating Britain’s homes, starting with the homes of the poorest people in the country:

Insulate Britain is calling on the UK government to take responsibility for and fully fund a national home insulation programme. We demand the Prime Minister and the government, face up to their responsibility and lead our country through the climate crisis. Our actions will continue until the government makes a meaningful statement indicating its intention to insulate all of Britain’s 29 million leaky homes by 2030, and all social housing by 2025.

In 10 years time when fuel crises are catastrophic, when the food has run out and when people are experiencing unsurvivable heat waves, what would you be wishing you had done now?

We think you’ll be wishing you had sat on the road with Insulate Britain doing whatever it took to protect current and future generations. So come join us on the road.

Clashes ensued between protesters and angry motorists on Wednesday morning, with demonstrators being dragged out of roads near a busy industrial estate in Essex.

Around 20 protesters blocked the junction to St Clements Way and London Road, in Thurrock, forcing multiple vehicles including HGVs to stop and turn round.

Vehicles blasted their horns and members of the public got out of their cars to confront protesters, who lay down in the roads in front of them.

Some were physically dragged out of the road but immediately returned, only to be dragged away again by the frustrated drivers.

Responding to the incident, Essex Police said: “We are currently on scene and have made arrests following reports of people blocking the slip road of the M25 in Thurrock.

“We received reports of people on the road at Junction 31 shortly after 8.25am today.

“Officers were at the scene within five minutes and are currently working to resolve the situation quickly and safely. Arrests have been made.

“We know this will be frustrating for people caught up in traffic but we appreciate your patience and understanding.”

“We are still pushing for life-saving changes”

The group has blocked parts of major roads around London, including the M25 and M4, to draw attention to the climate crisis.

Transport for London (TfL) was previously granted High Court injunctions against the group to prevent them further obstructing traffic – which apply to 14 locations around the capital.

The injunctions were extended to the end of next month on Tuesday, prompting members of the group to burn the court orders outside the Royal Courts of Justice in central London.

Despite the arrests and frustrated responses of commuters the group said other members of the public have praised its actions.

Dr Diana Warner, an Insulate Britain supporter, said: “Many people are going out of their way to thank us. Some come out of their cars to thank us, some are police officers involved with our arrests.

“To them, we bring hope – we haven’t yet given up. We are still pushing for life-saving changes.”