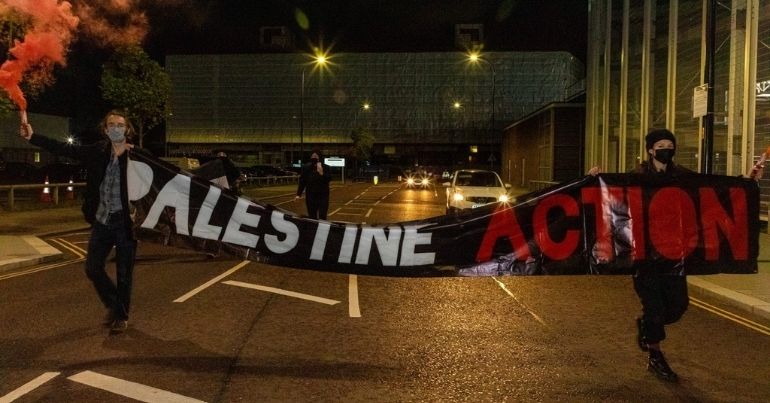 This is alongside action from several other groups across Liverpool:

The arms fair is taking place at the council-owned ACC exhibition centre. Important public spaces should be used for culture and leisure, not the promotion of warfare and destruction.

AOC Europe – known as the Liverpool arms fair – began on 12 October. Some of the companies exhibiting at the fair include Elbit Systems, BAE Systems, and ELTA. Elbit is Israel’s largest arms producer and BAE makes parts for fighter jets used in Israel.

A spokesperson for Palestine Action said:

This event cannot be allowed to go ahead. Liverpool’s residents don’t want arms dealers and war criminals gathering in their city, and its presence is an insult to our Palestinian, Iraqi, Afghan citizens, and all others whose homelands have been devastated by the products of Raytheon, Elbit, ELTA, and the other despicable firms meeting in the ACC.

After the council and event organisers failed to act, our activists have taken it upon themselves to uphold human rights by disrupting this festival of criminality.

The Liverpool Arms Fair has been met with major protests on its first day. Solidarity with all those working to resist this event, which is connected to conflicts worldwide.https://t.co/393mOPsVp3

Campaign Against Arms Trade (CAAT) and Network for Police Monitoring (Netpol) have both voiced their support for the protestors.

Many had already campaigned against the arms fair, and a petition to stop it has reached more than 6,000 signatures. Alongside Palestine Action, protestors from Liverpool Against the Arms Fair have been on the streets to show their opposition.

Photos from this morning's protest. pic.twitter.com/UTKhs2H91c

Despite trying to imposed a sweeping power to stop people resisting on conscientious grounds a deeply unpopular arms trade event, the end result for the police was still failure – people in Liverpool resisted anyway https://t.co/nfPt5KPnzf

Arms companies exhibiting at the fair are known to sell arms to countries known for human rights abuses. For example, BAE Systems, the UK’s biggest arms dealer, sells weapons to Saudi Arabia, Egypt, Turkey and the UAE. According to CAAT:

Liverpool Against the Arms Fair stated:

At the fair, arms merchants, whose weapons have been used to target civilian populations around the world, including in Palestine and Yemen, are due to market and sell their repressive products. Hosting the fair is a severe abrogation of the moral and ethical duties of the Council and is inimical to the values of the City.

The council has faced increasing pressure and protest over its decision to host the arms fair with the band Massive Attack cancelling a gig at the venue. The council didn’t listen. So now it’s down to ordinary people to take action to show the dealers in death and destruction that they’re not welcome in Liverpool.