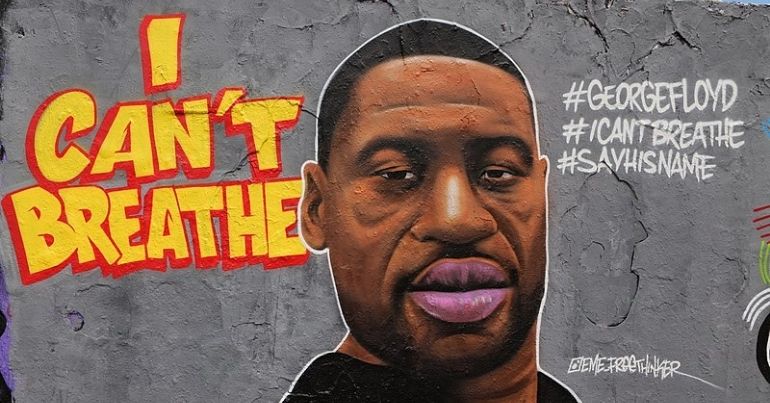 14 October is George Floyd’s birthday. Floyd’s murder by a police officer in Minneapolis in May 2020 sparked widespread protests across the US and overseas.

Police officer Derek Chauvin was later convicted of Floyd’s murder. As the officer knelt on his neck, Floyd repeatedly said “I can’t breathe”. Soon those words became a global rallying cry against racist policing. The judge said Chauvin’s 22 year sentence was based:

on your abuse of a position of trust and authority, and also the particular cruelty shown

One initiative set up for the occasion is #TeachTruth Day. It’s purpose is to honor George Floyd’s birthday. The day consists of online teach-ins which are being held around the US to address systemic racism. Campaigners say it’s a:

Meanwhile, supporters gathered by a statue of Floyd in New York to remember him:

In honor of #GeorgeFloyd’s birthday a celebration was held in front of his sculpture in #UnionSquare #nyc #news pic.twitter.com/8s0H5oX84M

And one twitter user posted images of Floyd with his children. As well as images of the protests which followed his death. Data from the time of the killing showed that Black Americans were 2.5 times more likely to be killed by police than white people.

George Floyd should've turned 48 today. Happy Birthday to him & may he continue to to rest in peace. 🕊️🕊️ pic.twitter.com/cHNQC2hdgL

Since Floyd’s murder many reforms have been suggested. Some want a ban on chokeholds and implicit bias training for officers. Others want the police to be defunded. Elsewhere, national days of action began. And these included calls to decolonise education:

We Love You George Floyd. We Got You This October 14th #TeachTruth National Day of Action for Your Birthday. https://t.co/JNPmnarPIY

But, as another poster pointed out, the struggle is far from over. Some reforms have taken place within individual police forces. But these are largely ad hoc and do not seem to address the systemic problem of racism.

Tomorrow would have been George Floyd's 48th birthday. Derek Chauvin cheated him and his family of celebrating

George should be still here.

Three other police officers present at the killing will be tried later in 2021. While Derek Chauvin is currently appealing his 22 year sentence. Today will be a day to recall George Floyd’s life and legacy, but the struggle against racism and violent policing continues.