It may be Black History Month, but it's business as usual in the UK - Canary 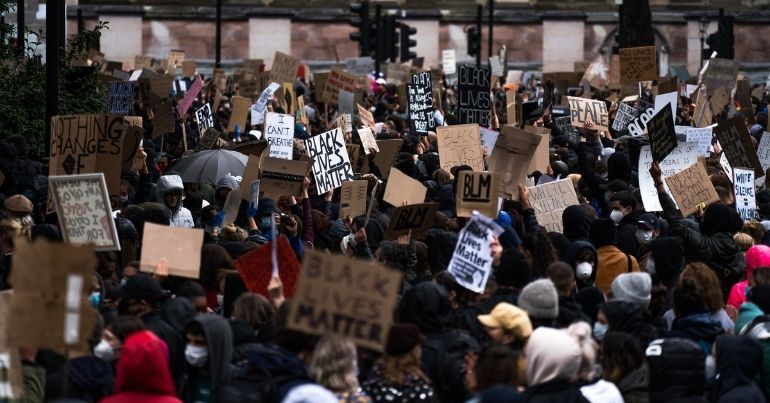 Every October, we mark Black History Month in the UK. It’s a time in which we’re encouraged to reflect on the Black presence in Britain, and to celebrate the contributions Black people have made and continue to make to our society. However, for many institutions and individuals, this month appears to have been business as usual.

By banning Black British English within a classroom setting, they are failing their legal duties to provide children with a broad and balanced education they are instead providing Black British Language speakers with a language education void of their culture and history.

The organisation sent an open letter urging school leaders to reverse the ban. The group highlights the ban is harmful for Black students’ “racial esteem” and ‘reproduces anti-Black linguistic racism’. They add that it isn’t in line with the 2010 Equality Act which states that public sector bodies must seek to “eliminate discrimination, harassment, victimisation”, or the United Nations Convention on the Rights of the Child which protects children’s right to speak their own language. They also highlighted it’s in breach of the 2002 Education Act. This Act states a curriculum should ‘promote the spiritual, moral, cultural, mental and physical development of pupils’ and ‘prepare pupils for later life’.

The implementation of this policy reinforces the ideology of the inferiority of Black languages linking to the historically racist and imperialist view of Black people as ‘less than.’ BLAM rejects the guise of ‘professionalism and preparation for the future’ as explanations provided by the school for the ban… We also need to think deeply about the historical implications of what we deem to be ‘proper’ English.

The stigmatisation of Black British culture didn’t end there. On 11 October, the Independent published a headline reading:

One in three gangland murders in London ‘linked to drill music’ https://t.co/4zWNiBzKJo

This was based on a report by right-wing think tank Policy Exchange, which also points to the Met Police’s “unusual and unjustified” policing strategy. Clarifying the report’s claims, the Network for Police monitoring (Netpol) shared:

This is a misleading summary of what the Policy Exchange actually claims: it downplays emphasising disproportionate stop & search within black communities and in classic moral panic territory, blames knife crime on Adidas, drill music and social media https://t.co/kbhigbxnM7

Pointing to the structural issues that are linked to rising knife crime, one Twitter user shared:

Indeed, 40 years of cuts and privatisation, an increasingly fascist state, and a devastating pandemic have resulted in a frustrated, volatile population with very little to lose. In the last decade, the Tories have cut funding to youth services by an astonishing 73%. On top of this, young Black working-class people face persistent marginalisation through disproportionate racist school exclusions, stop and search, and policing on and off school grounds. As set out by United Borders – a charity that supports at-risk young people – drill music is very much a ‘symptom‘ of this depressing state of affairs, rather than a cause.

No justice for Windrush victims

On 12 October, the Voice reported that the Tilbury Bridge Walkway of Memories has been vandalised in a suspected race hate attack. The memorial was created as a tribute to the Windrush generation who arrived in the UK from the Caribbean. It features images of those who arrived at Tilbury Docks aboard the Empire Windrush in 1948. In an act of vandalism, a number of these panels have been smashed.

This act of hostility came as the UK Home Office continues to delay sending compensation to the victims of the Windrush scandal. The Windrush scandal refers to the Home Office‘s unlawful detention, deportation and denial of hundreds of Commonwealth citizens’ rights, having destroyed thousands of immigration records. At least 21 people have died before receiving the compensation they applied for. Speaking to the ongoing injustice, Black and Asian Lawyers for Justice tweeted:

The @ukhomeoffice Windrush compo scheme is a cruel and unusual punishment. Black people are being treated with hostility, malign neglect and contempt despite the crocodile tears, grand promises and apologies from @pritipatel There is still no justice. https://t.co/uQCVrEHCsm

Adding further insult to injury, one of prime minister Boris Johnson’s special advisers turned Windrush justice activists away from the Tory Party conference. Julia Davidson and Anthony Brown had paid for their tickets and sought to engage delegates, but were turned away. Expressing her disbelief, Windrush lawyer Jacquelin McKenzie shared:

When the Home Secretary announced earlier she'd be cracking down on protestors, no one expected the first ever victims to be #Windrush activists, ejected today from the Tory party conference to which they were accredited, in case they protested. Shameful! https://t.co/7NuvLT8Il6

On 12 October, former health secretary Matt Hancock announced his appointment as UN special envoy to support Covid-19 recovery efforts across the African continent. His announcement came after a Commons inquiry found the Tory government was responsible for one of the worst public health failures in UK history. At the time of writing, the UK’s Covid death toll is over 137,000, one of the highest in the world. The report also noted significant racial disproportionality in UK Covid deaths.

Hancock also presided over Black people being disproportionately affected by the pandemic in the UK. Obviously in the eyes of racist Johnson this means you put him forward for a post to do with Africa.

Matt Hancock announcement of top United Nations job at a time his ineptitude & depraved indifference to life is reported to have caused Covid deaths makes me sick.

These bastards lied & killed with their incompetence but suffer zero consequence.

Africa does not want your trash

Shedding light on the gravity of the situation, Streatham MP Bell Ribeiro-Addy shared:

Just 4.4% of people in Africa have been fully vaccinated.

Matt Hancock belonged to a Government that has consistently blocked attempts to increase vaccine supplies to poor countries in order to protect pharmaceutical profits.

What did the African continent do to deserve this?

It's almost as if the British government sees Africa as dumping ground for white mediocrity to attempt its redemption 👀https://t.co/rVAL67zbb0

So far, Black History Month has been another month of British institutions doing what they do best – making life considerably worse for Black people everywhere.