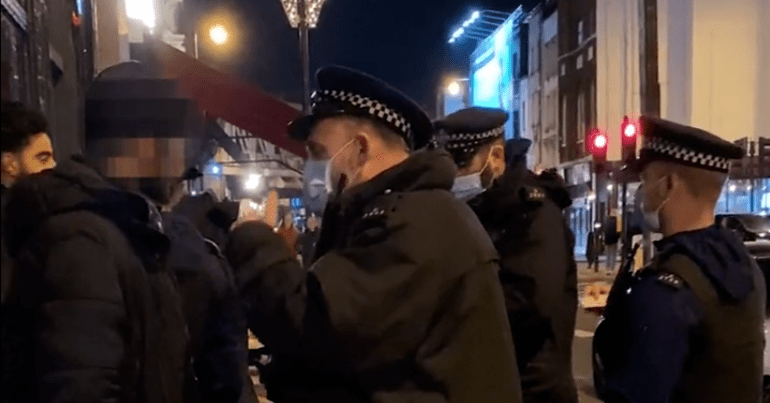 2022 has begun with yet another ridiculous claim from the Metropolitan police that it’s “supporting women’s safety“. There’s been uproar from the public since the Met tweeted a video on 2 January of its Taskforce Officers swabbing people’s hands for evidence of drug usage on the streets of Shoreditch. Embarrassingly for the Met, just one person – a woman – was arrested in the very operation that claimed to protect women.

It’s exhausting to hear the same rhetoric parroted again and again, both by the police and by the government, claiming that they care about women’s lives. The government is doing nothing to tackle the systemic sexism and misogyny in society and in the police. Instead, it’s passing new laws that actually make women less safe, and is giving some of the country’s most violent men – police officers – inexhaustible new powers through both the police bill and the Covert Human Intelligence Sources Act, which was passed in 2021. The state has even provided further funding for Stasi-style undercover cops to lurk around in nightclubs (in the name of women’s safety, of course).

Police are a danger to women

While the police continue to claim that they’re making women safer, let’s remind ourselves of the fact that Sarah Everard was murdered by a Metropolitan police officer, and that the women who gathered to remember her were physically assaulted by the Met.

And this is only the tip of the iceberg. Everard’s murderer was not just one ‘bad apple’. A document called #194andcounting shows that at least 194 women have been murdered by the police and prison system in England and Wales, either in state custody or in prison, since the 1970s. And let’s also remind ourselves of the disgusting Metropolitan police officers who took selfies of themselves next to the bodies of murdered women Bibaa Henry and Nicole Smallman.

The police aren’t just a menace to women on the streets. They’re also dangerous in their own homes. Back in May 2021, Channel 4 News reported that 129 women had come forward in the last two years to report that their police officer partner was abusing either them or their children. Channel 4 said:

At least 129 women have approached the Centre for Women’s Justice (CWJ) since 2019 with claims of being raped, beaten and coerced by their police officer spouses and partners.

One former police commander described officer perpetrated domestic abuse as an “epidemic” within the force.

Feminist group Sisters Uncut argues that while the police have power those who identify as women can never feel safe:

In November 2021, Sisters Uncut stated that it was ‘withdrawing its consent to police power’. The group argued:

We know the police treated the family of Bibaa Henry and Nicole Smallman with utter contempt: officers took photos of their dead bodies and turned the horrific violence they’d experienced into a joke. Women in Black, immigrant, disabled and working class communities bear the brunt of complicity in this corruption.

You are not obliged to cooperate with the police

Of course, when hassling people on the streets, the police count on the fact that many of us don’t actually know our rights. If an officer questions us, or demands to search us, we feel obliged to comply with them. But if the police are going to continue randomly swabbing people’s hands for drugs, it’s important to know that we can walk away. The police’s stop and search powers do not extend to random drugs tests as Green and Black Cross makes clear:

❓If you're ever stopped by an officer, ask 'Am I being detained?'
🚶If the answer is no, you're free to walk away
❓If yes or you're asked to do something, ask 'Under what power?'
📝Make a note of what's said https://t.co/7FuYfg4Wpq

So while the police continue to rely on the public’s naivety as it hassles people on nights out, remember that we all have the right to resist rather than comply.

We can see that the police do not make our streets any safer for women, nor will random drugs tests or stop and searches make any difference. The problem is the ingrained misogyny of men in our society, and of those who have the monopoly of violence against us.

The police already abuse the powers they have – so giving them even more powers is terrifying. The police bill, with its frightening new amendments, is currently in the House of Lords and could soon become law. Now is our last chance to resist these sweeping police powers. A national day of action has been called on 15 January. Let’s take to the streets again and kill the bill before it’s too late.