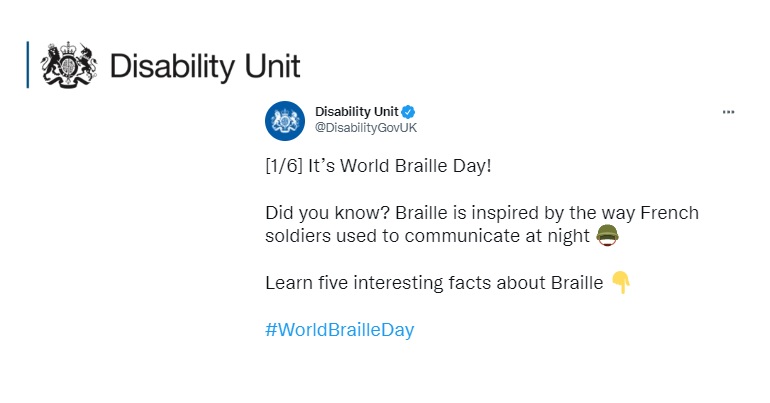 It’s only the start of January. But already the government has shown that blind and low vision people are an afterthought. Because its Disability Unit managed to create a video about them which was inaccessible.

Tuesday 4 January was World Braille Day. As the UN explained:

World Braille Day, celebrated since 2019, is observed to raise awareness of the importance of Braille as a means of communication in the full realization of the human rights for blind and partially sighted people…

Braille is a tactile representation of alphabetic and numerical symbols using six dots to represent each letter and number, and even musical, mathematical and scientific symbols.

It also noted that braille:

is essential in the context of education, freedom of expression and opinion, as well as social inclusion, as reflected in article 2 of the Convention on the Rights of Persons with Disabilities.

But the government clearly forgot the “social inclusion” aspect of Twitter. Because it managed to put content out about braille that was inaccessible to blind and low vision people.

The Disability Unit is part of the Cabinet Office. It’s been responsible for publishing the government’s new disability strategy. On 4 January, the Disability Unit released a video for World Braille Day. It gave a brief overview of the subject. But the video had no narration. Therefore, it was inaccessible to blind and low vision people:

Did you know? Braille is inspired by the way French soldiers used to communicate at night 🪖

People also pointed out that the Disability Unit may have made some mistakes with its history of braille claims:

While the film's inaccessible, it also repeats an incorrect belief about Braille's origin.

Braille improved on Charles Barbier's original dot system, which Barbier explicitly stated was intended for 😮 blind people! – it was not inspired by the army.https://t.co/hauMt8IP6K

— Provide Aimovig for migraine on the NHS (@PutAimovigOnNHS) January 4, 2022

But the Disability Unit was not the only department that put out inaccessible content for World Braille Day.

The DWP: a repeated problem

The Department for Work and Pensions (DWP) put out a tweet with an image that had no alt text. That is, blind and low vision people would not know what the image was of nor what text was in it:

Find out if Access to Work could support you https://t.co/bnLvgNYmyT pic.twitter.com/Eel6koOt2U

Not that this was the first time the DWP has done this. Its last image-based tweet also did not have alt text:

Don’t miss out on a #Kickstart Scheme opportunity

If you’re aged 16 to 24 and on #Universal Credit then speak to your work coach as soon as possible https://t.co/4bpvW8KgZl pic.twitter.com/qIibGVGiGD

The Government’s Equality Hub is committed to providing accessible content on all of our channels.

In line with our commitment, the text in this video was also tweeted in order to ensure that it is accessible to screen readers.

Braille is an important part of our cultural history as blind people. I’m curious to know why a decision was made to produce a video that is inaccessible to us?

So, it seems that for the Conservative government, blind and low vision people are an afterthought. As one Twitter user summed up:

this must be a joke?!! No narration or audio description. There is absolutely zero excuse for this. It must be a deliberate and egregious demonstration of tokenism. This government’s default. Not only pretend to give a fuck but disenfranchise them simultaneously!

Let’s hope the government does better for the rest of the year. But sadly, that’s probably unlikely.