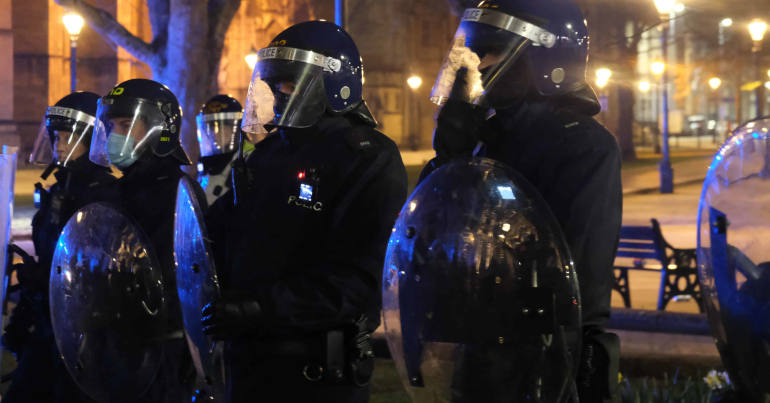 You might get excited when you read stories in the mainstream media stating that the government has suffered a “series of defeats in the House of Lords” over the Police, Crime, Sentencing and Courts Bill. It is true that we have had a minor victory. And if it wasn’t for the relentless protesting and campaigning by the Kill The Bill movement over the last ten months, we would be facing a much worse bill. But don’t get too carried away with optimism.

For a start, most of the measures chucked out by the Lords were the additional amendments to the bill: these were added at a later stage by the Lords themselves. There’s still a raft of laws that weren’t challenged, and there’s a number of measures that, even though thrown out by the Lords, can still be added again when the bill goes back to the Commons.

Yesterday, the House of Lords scrapped a number of significant amendments to the PCSC bill.

Yes, the Lords’ amendments to protest law were scrapped

As hoped, the Lords scrapped the proposed additional amendments to protest. The offence of ‘locking on’ or being ‘equipped to lock on’ has been thrown out, as has the power to search someone for lock-on materials.

The government had proposed increasing the penalty for highway obstruction from a maximum of a £1000 fine to six months imprisonment and an unlimited fine. Whilst this was rejected, an amendment increasing the sentence for those obstructing “strategic road networks”, such as the M25 did get approved.

These amendments can’t be added back in by the Commons because they were proposed by the Lords in the first place.

The Lords did vote against the measure to give police more powers to impose conditions on a protest if they’re deemed too noisy or disruptive. But this can be added again when the bill goes back to the Commons, making a mockery of the whole process. Early indications from the government suggest this is exactly what it will do.

But not so widely reported is the fact that a massive watering down of the threshold for prosecution for breaching conditions imposed on a protest did go through. This is a key change of the wording of the 1986 Public Order Act meaning that a successful prosecution can be brought if someone “ought to know” the conditions imposed by the police. In other words, you could be convicted of breaching a condition even if you didn’t know they’d been imposed. Currently, it has to be shown that a person knew the conditions were in force.

Most of the very laws that we began protesting about back in early 2020 weren’t challenged at all, so it doesn’t make sense to be celebrating a victory. The bill will still criminalise the way of life for Gypsy, Roma and Traveller communities by making trespass with the intention to reside in or near a vehicle criminal offence. It will allow the police to arrest travellers, and/or confiscate their caravans or vans, which are literally their homes.

And then there are the other new protest measures that will still be introduced. Offences such as prison sentences of up to ten years for tampering with a statue, or the prospect of up to a decade in prison for causing “serious distress, serious annoyance, serious inconvenience, or serious loss of amenity” on a demonstration are still in the legislation.

But there’s also a raft of measures in the bill that haven’t received as much attention that we should be just as concerned about.

The bill will change the minimum age of receiving a life sentence in prison from 21 years old to 18 years old, locking up young offenders who are usually from the most working class and difficult backgrounds. On top of this, the bill will introduce secure schools, which the government describes as a “planned new form of youth custody”. Secure schools will, essentially, be prisons for children aged from 12 to 18 years of age, and they will be run by charities: yet more money being funnelled into the private sector.

It will also introduce the Serious Violence Duty, which would force a range of local authorities such as youth groups, schools and health boards to collaborate with the police by sharing intelligence and data with them. The duty by these authorities to share data would undermine existing data rights and doctor-patient confidentiality.

This intelligence gathering is also likely to lead to the state issuing people with Serious Violence Reduction Orders (SVROs), which will be rolled out in a pilot scheme.

While some campaigners are getting distracted by our victory in the House of Lords, we should really be focussing on is the fact that we live in a charade of a democracy. The very fact that we are relying on a house of unelected elites to salvage our basic rights should be sounding the alarm that we need serious system change. And the fact that certain parts of the legislation can be reintroduced anyway by the Commons makes even more of a mockery of the whole process. There are also complaints that the government deliberately forced the late timing of the debate in the House of Lords so that the bill couldn’t be unpicked properly.

So don’t get too excited by the victory. We still have a massive fight ahead of us, and we shouldn’t let this distract us from thinking that much has changed. Instead, let’s use this slightly good news as a starting point to regroup and reenergise the fight against the rest of the bill.