Kill the Bill defendant cleared of riot but guilty of arson. The case against her was always outrageous. - Canary 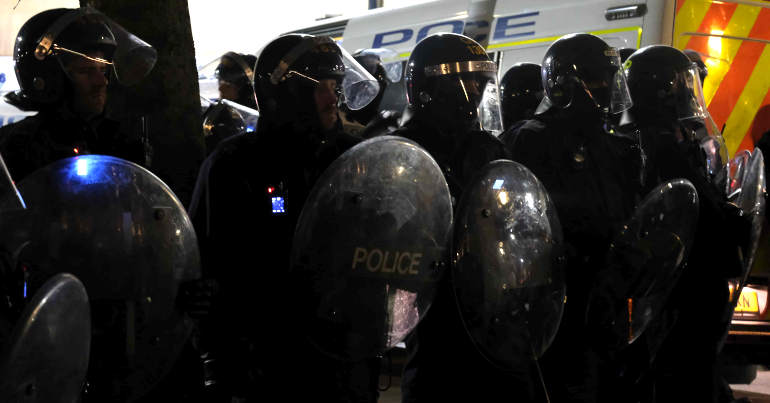 A jury has found Kill the Bill defendant Jasmine York guilty of arson, but not guilty of riot. The case against Jasmine York was always outrageous, and evidence against her was scant. She’s one of 82 people who have been arrested – most of them for riot – following the 21 March demonstration in Bristol.

The jury was unanimous on a not guilty verdict for the riot charge.The state poured a lot of resources into trying to find Jasmine guilty, and the prosecutor had a police team assisting her throughout the trial. For a person to be guilty of riot, they have to have committed unlawful violence. But the prosecution showed no evidence that Jasmine used any violence at all. It relied heavily on footage of other protesters graffitiing and rocking a police van, and, much later, vehicles on fire. But none of this involved Jasmine. Most of the footage they did have of Jasmine showed her yelling at the police and chanting. As defence barrister Russell Fraser said in his closing speech:

emotion runs high indeed in times of social upheaval. I suggest you saw that full range of emotion in the footage played in the trial: optimism, excitement, anger, pain. That anger, even when it spiralled into foul language, never came close to unlawful violence, not violence for a common purpose.

So chanting is one of the reasons why Miss York finds herself here, why the Crown sees her as a leader, an instigator. It is a particularly big claim.

Desperate to prove that Jasmine was the ringleader, prosecutor Sarah Regan relied on a video clip of Jasmine saying that she was going to set up a Signal group chat on her phone. Regan suggested that Jasmine set up this group before 21 March in order to organise with others against police at the protest. But it quickly became apparent that Jasmine had set up the chat days later – only after she had been traumatised by the police, hit by a baton, and bitten by a police dog. In response to Jasmine being painted as a premeditated instigator, Fraser said:

If someone is a leader, are they not recognised as a figurehead? Are they not someone of influence? People need to know who you are and she’s not known to the police. She’s not noticeably with anyone else at the protest. She isn’t with anyone outside the police station. How is it that from that she becomes the orchestrator of a riot?

On top of this, Jasmine arrived at the demonstration unmasked and wearing a long, bright yellow skirt. That’s hardly clothing you’d wear if you were planning a riot.

The prosecution, along with its police witnesses, did a good job of painting a one-sided picture of a “mob” attacking the defenceless police, of a police force solely acting in self-defence. But as The Canary has extensively reported, there’s ample evidence of the police using shocking violence, and even of them ‘blading’ protesters with their oblong shields. Jasmine herself called the police after the demonstration to make a complaint about the violence the police had inflicted upon her.

We played a number of incidents of footage that you would appreciate – we say – demonstrates police violence. A man who was kicked several times on the ground as he retreated. A man who had a shield brought down on his head. The men lying down on the pallets who were hit while they were on the ground. Miss York being hit by a baton when she wasn’t a threat to anyone. A photographer being pushed with force: what could he have been doing?

Regan was so keen to portray Jasmine as violent that she tried to discredit livestream footage which the Crown Prosecution Service itself had submitted as evidence. The livestream was filmed by Jasmine, and it showed her screaming “no, don’t hit” and “stop hitting her” at the police as they attacked the crowd. Regan ludicrously argued that because the footage came from Jasmine herself, she obviously had “an agenda”. But as Jasmine and her defence pointed out, she was on the frontline to protect others.

Referring to the footage played to the jury, Fraser argued that at one point in the video:

where she has her arms outstretched, if you watch the video and watch it in full, she is putting herself in harm’s way to protect others. She shelters people and takes a small female with her, away from danger.

The one consistent thing she does is that she comes to the aid of other women. Consider the woman thrown back into the crowd. She moves across the line for that reason. There’s not many of us who would do that sort of thing, you might think.

Fraser told the jury that “time and time again” Jasmine put herself between danger and other people.

The Crown insisted that Jasmine was guilty of arson because she pushed a commercial rubbish bin towards a burning police car, and the bin added fuel to the fire. But Jasmine insisted that she didn’t push it towards the police car but towards the police themselves. She said that she was using the bin to try to create an obstacle between her and the police. Crucially, there was no evidence whatsoever that the bin in question was ever on fire.

Fraser said that the car was:

already engulfed in flames. Most importantly of all, when you’re considering the standard of proof, where is the bin? There’s no photos of it. No one reported it missing. Does that absence of evidence leave you uncomfortable?

Despite this, the jury found her guilty of arson.

Stand with the Kill The Bill defendants

Regardless of what happened in court, it’s important to stand with Jasmine and others who defended themselves against the police’s violence on 21 March. We know that the combined force of the police, the Crown Prosecution Service, and the mainstream media is stacked against them. They need our support now more than ever. The Kill The Bill demonstrations of March 2021 were the beginning of a new wave of resistance against the state’s latest authoritarian measures. We need to carry on that struggle and build real community power that can truly challenge state control.