Bristol 'riot' defendant went to Kill The Bill protest to remember Sarah Everard, and got beaten by the police - Canary 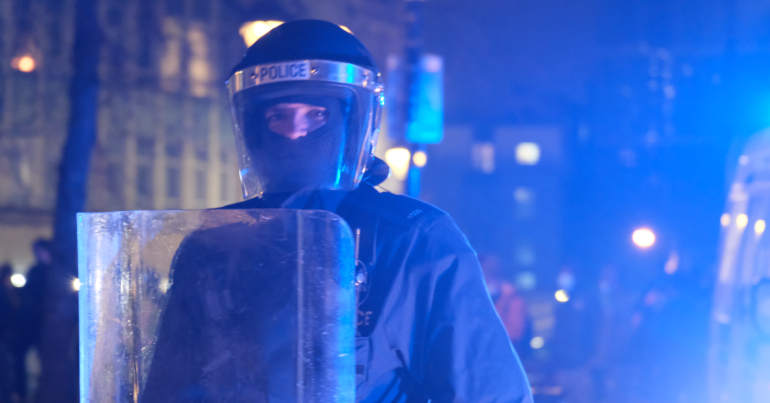 Jasmine York told Bristol Crown Court that she had attended College Green on the 21 March 2021 to remember the killing of Sarah Everard by a police officer. But by the end of the day she had been beaten by the police herself.

A vigil was being held on College Green to remember Sarah, who had been murdered on 3 March by serving police officer Wayne Couzens. Members of the public had been leaving flowers at a memorial. Jasmine told the court that she had gone to the vigil, and then joined the demonstration against the proposed Police, Crime, Sentencing and Courts Bill.

She said in evidence:

There were speeches about the Policing Bill, which gives the police more powers, for example increasing Stop and Search powers which target minority groups.

Sarah was murdered by a police officer so giving them more powers scared me.

She said that she hadn’t gone to College Green because of the Policing Bill, but that she had learnt about the Bill from the speeches, and from the people in the crowd. She decided to join the demonstration.

The trial so far

Jasmine’s trial has been ongoing since Monday 31 January.

On Wednesday 2 February, the jury saw footage of Jasmine and other protesters being struck with batons and kicked by officers. Later on in the evening Jasmine is bitten by a police dog as she is walking away from the police line.

Jasmine called the police – just hours later – to report that she had been assaulted by several officers, but she ended up being arrested herself. She is now in court charged with riot and arson. She denies both charges. If found guilty she faces years in prison.

Click here and here to read The Canary‘s previous coverage of the trial.

I was there to “protect women”

Jasmine started her defence evidence on Wednesday 2 February, her evidence continued on the morning of Thursday 3rd. In her defence evidence, Jasmine told the court that her intention had been to film what was going on, and to protect women in the crowd who were facing violence from the police. She explained why she felt it was important to be there:

I think filming is important whenever there’s violence. I’ve been in situations when there’s been violence before and people don’t believe you. I am taught not to respond to violence with violence, so I think I am a good person to be around.

Jasmine explained to her defence barrister that she had experienced male violence before. She described her motivations in what she was doing:

the only thing I was ever trying to do was to make sure people were safe. I wanted people to be safe.

She said that police officers had acted “in a shameful way” when they hit her with batons. There was a point in the protest where Jasmine picked up a police baton. But she said that she simply “put it to the side” of the road.

The court heard that – later on – Jasmine was pushed by an officer, and then hit with batons. After that she is seen to have her arm around someone in the crowd. Defence barrister Russell Fraser pointed out:

to your left hand side you appear to be putting an arm around someone and then returning back into the crowd.

there was a girl who had been hit and I was protecting her. That’s why I was there. To protect femme people, women.

She returns to the demonstration

A little later, Jasmine left the demonstration. But she told the court that she watched the events unfolding on social media and she decided to go back. Fraser asked her why. She said:

because I knew people were still being hit and I felt bad that I had decided to leave. I feel like in situations of injustice if you do nothing you side with the oppressor, and that’s what I felt like I’d done

Jasmine said she returned to the demonstration at around 10pm. A police car was on fire close to the Cedar Express restaurant near Bridewell Police Station. The arson charge against Jasmine relates to pushing a bin – which the prosecution say was damaged by the fire. When prosecutor Sarah Regan asked Jasmine why she moved it she denied wanting to set it alight. She said:

I had been really badly beaten that day, I was more scared of the police than the fire.

She added that she had pushed the bin because she:

wanted it to be an obstacle, between the police line and the people

Finally – responding to cross-examination from Regan – Jasmine reiterated that her actions were:

Jasmine told Fraser – and the court – how she felt after the demonstration. She said:

I was heartbroken, to be honest.

The defence also called evidence from Katherine Hobbs. Hobbs works for the Network for Police Monitoring, and was acting as part of a volunteer legal observer team on the 21 March.

Hobbs gave evidence about the use of police riot shields as weapons. She said:

I think that it was around 6pm that we saw square shields being deployed. There was quite an issue with shields being used as a weapon on that demonstration. There were a lot of incidents of a tactic that’s known as ‘blading’, particularly as people were sitting on the floor – its a controversial tactic and causes a lot of injury

Hobbs described how – as a response to the police violence – she and others set up an “impromptu first aid station”. She described providing first aid to people who had been pepper sprayed, hit with police batons or police shields. She described supporting one woman who had suffered a serious panic attack.

She told the court:

I noted that the police weren’t assisting us in any way, they didn’t provide any medical assistance to us.

“I saw a police line attacking a protest“

Hobbs said that she saw incidents where the police were attacking members of the crowd while they had their hands raised over their heads. When Regan asked her if she saw protesters being violent, Hobbs replied:

The defence has now closed its case and Fraser and Regan have given closing speeches for the defence and prosecution. The jury is expected to be sent out on Friday 4 February.

Featured image by Eliza Egret. Thanks to Eliza Egret for taking notes during the case.