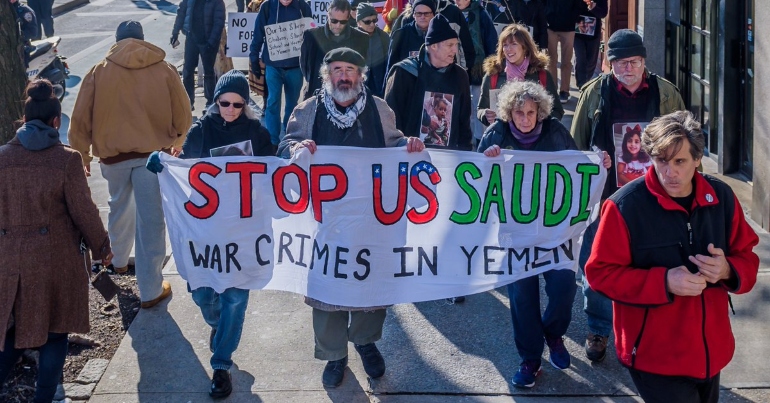 As The Canary has extensively reported, the ongoing war in Yemen has seen Saudi-led forces commit atrocity after atrocity. But on 21 January, the Saudi dictatorship appears to have reached a new low in an attack that killed scores of civilians.

Given that Saudi Arabia is the US’s second biggest ally in the Middle East, its conduct in the war exposes the US’s brazen double standards when it comes to human rights. The war itself, meanwhile, stands as a testament to the US’s shameless use of proxy wars to further its own geostrategic interests.

The air strikes launched by Saudi-led forces destroyed a detention facility in Yemen’s Saada province, which is currently controlled by the opposing Houthi-led forces. The death toll from the attack currently stands at over 90, with many, if not most, of that number comprising civilian casualties. Over a hundred more are believed to have been injured. The attack was denounced by, amongst others, United Nations secretary-general Antonio Guterres and Save the Children, which says that children are among the dead. The Saudi dictatorship denied it intentionally targeted the complex.

This latest attack adds to a long list of atrocities committed by the Saudi-led coalition forces, which also includes the United Arab Emirates (UAE), another Middle Eastern US ally. As The Canary has previously reported, this list includes dropping a bomb on a school bus killing 40 children and 11 adults, as well as a similar attack on a wedding that killed at least 20 civilians. In the case of the former, there is strong evidence that the US-made bomb was supplied to Saudi Arabia via a US arms deal.

Indeed, both the US and UK governments have been major arms suppliers to Saudi Arabia. During his time in the White House, former president Donald Trump met with the Saudi crown prince Mohammad bin Salman to discuss the two countries’ ongoing partnership. He then vetoed a bill passed by Congress that would have limited US military aid to the oil rich Middle Eastern nation.

Now, under current US president Joe Biden, the country remains the US’s second staunchest ally in the Middle East after Israel. Indeed, late last year Biden committed to another whopping arms deal, this time worth $650m. This should come as no surprise given that Biden’s presidential campaign received over $500,000 from Raytheon, one of the major profiteers from the war in Yemen.

The Biden administration now seems to be scrambling to use the war as part of its broader foreign policy in the Middle East. In particular, it appears to be capitalizing on the fact that the opposing Houthi-led side in the conflict is allied with Iran.

Brazen hypocrisy when compared with treatment of Iran

As The Canary has reported, Washington has for years singled out Iran for sanctions and other forms of hostility. This includes the assassination (in violation of international law) of the major general of Iran’s Islamic Revolutionary Guard, Qassem Soleimani. Again, this hostility is not because of concerns over human rights. Though Iran’s human rights record is far from stellar, Noam Chomsky points out that compared with Saudi Arabia, “Iran looks like a civil rights paradise”. Nor does it have anything to do with democratic credentials. After all, Saudi Arabia is not just a dictatorship but one of the world’s last remaining absolute monarchies.

Rather, hostility toward Iran is motivated by its lack of obedience to US economic and geostrategic interests. To take one example, whereas Saudi Arabia has been giving US multinational corporations preferential access to its oil reserves, Iran has been less obliging in this regard. Another reason is that the US seeks greater control over the Persian Gulf, a major area of importance for the oil industry that lies in part along Iran’s southern coast.

Willingness to compromise repaid with even further hostility

In spite of all this, Iran has been surprisingly willing to compromise with Washington. During the administration of former US president Barack Obama, for example, Iran signed the Joint Comprehensive Plan of Action (JCPA). Known colloquially as the ‘Iran nuclear deal’, the agreement set limits on Iran’s nuclear program in exchange for an easing of sanctions.

The agreement was completely hypocritical given that the US has not just turned a blind eye to but actively enabled the only nuclear-armed state in the region, Israel. Indeed, the US itself holds the second largest stockpile of nuclear weapons in the world. There’s even conflicting accounts about whether Iran’s nuclear program is even intended for developing nuclear weapons in the first place. The Iranian government says that it is exclusively for developing nuclear energy generation and currently allows the International Atomic Energy Agency (IAEA) to monitor its nuclear program. Nonetheless, Iran voluntarily agreed to the terms in a move supported by most of the US’s major allies, including the UK.

In 2019, the Trump administration unilaterally pulled the US out of the treaty in a move that was condemned by Washington’s European allies, again including the UK. This meant the reimposition of sanctions including a withdrawal of import permits. These sanctions will, and indeed already have, caused great damage to Iran’s economy. And as is so often the case with sanctions, it’s largely the civilian population, and especially the most vulnerable people, who suffer the most rather than the ostensible targets in the government.

Now, the Biden administration looks poised to seize on the actions of the Iran-aligned Houthi side in the conflict for its own benefit. In recent weeks, Houthi forces have launched a series of successful countermeasures. The Associated Press (AP) reports that this has included “cross-border drone and ballistic-missile strikes”. In response to this, the AP says that “U.S. officials are studying financial measures targeting the Houthis and the group’s top figures”.

The Biden administration is currently in negotiations with the Iranian government to reestablish the JCPA. US officials earlier indicated that they hope to bring the talks to a conclusion in late January or early February. Just as this unofficial deadline looks like it will pass, Washington seemingly has stumbled upon a useful tool, in the form of the Yemen war, for strengthening its hand in the negotiations.

As Al-Monitor puts it, “The stepped-up US military support [for the Houthis in Yemen] is not just a sign of the US commitment to the UAE — it’s a signal to Iran”. Clearly, Washington is willing to shamelessly use proxy wars as a bargaining chip to strengthen its geostrategic interests in a broader global context.

What makes all of this even more disconcerting is the fact that the current US president belongs to the purportedly more progressive of the US’s two major parties. But as The Canary has argued before on many occasions, the reality is that when it comes to administering the US’s empire and maintaining its coercive foreign policy, there is essentially a bipartisan consensus in Congress, with the leadership of both parties largely acting in lockstep.

In the same vein, ignoring and even enabling shocking human rights violations on the part of US allies largely enjoys bipartisan support. As this latest atrocity in Yemen attests to, there is evidently no depth to which Washington won’t sink in its hypocritical pandering to loyal allies or its cynical seizing upon proxy wars to further victimize its enemies.