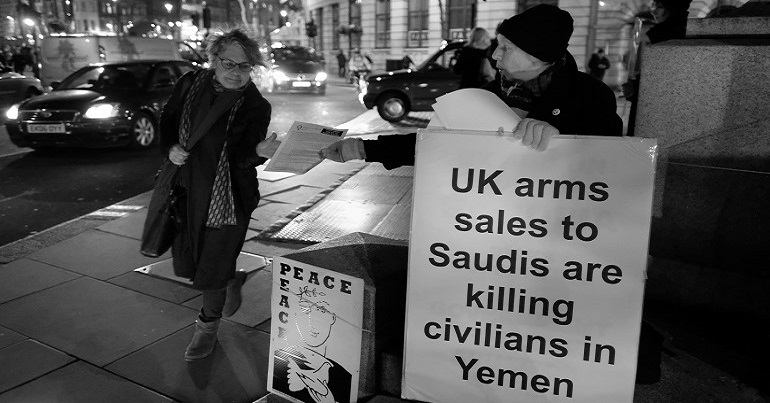 On 21 January, air strikes from the Saudi Arabia-led military coalition were blamed for killing over 200 people in the “U.S.-backed conflict” in Yemen. One report said the bombings targeted a prison “holding mostly migrants”. The report says they also bombed and killed children as they played football. Following these attacks, the medical humanitarian organisation Doctors Without Borders said one hospital was:

so overwhelmed that they can’t take any more patients

As extensively reported by The Canary, the UK arms industry has a vested interest in this conflict. And this latest slaughter highlights Britain’s role in Yemen, as Labour MP Kate Osamor tweeted:

With reports that more than 60 people have been killed in the latest act of the Saudi-led war in Yemen we must remember that the UK Government continues to supply arms with the claim that reported war crimes are only 'isolated incidents'. #YemenCantWait https://t.co/zkC64vhcvE

The AFP News Agency reported on the attack and the extensive loss of human life:

#UPDATE More than 200 people were killed or wounded in an air strike on a prison in #Yemen and at least three children died in a separate bombardment as the country's long-running conflict suffered a dramatic escalation of violence on Friday https://t.co/llmif69zsE #Saada

Meanwhile this human rights activist posted this video claiming to be of a bombing on a civilian home:

Graphic footage of the Saudi-UAE airstrikes on civilian homes on #Yemen yesterday, that caused dozens of civilians casualties, mostly women and children.#YemenUnderAttack pic.twitter.com/FTAnQbUK8U

Moreover, this image analyst service posted shocking “before” and “after” images. It claims these are images of a football field hit during the strike. And it listed the countries, including the UK, it felt were responsible: 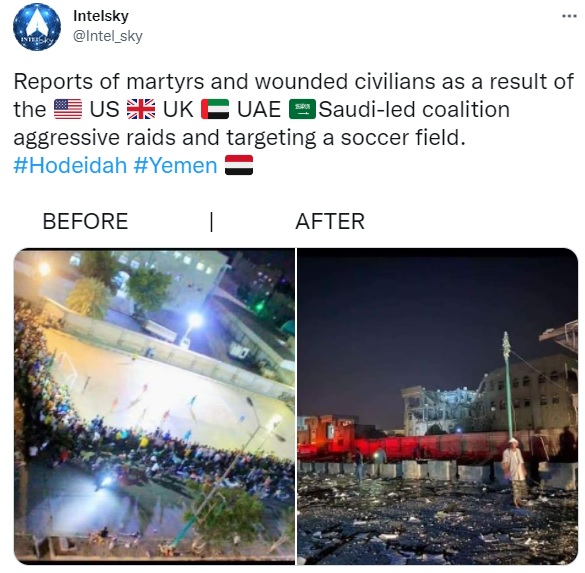 This protest in Huddersfield, which took place on Saturday 22 January, also pointed a finger at the UK and called on it to stop arming Saudi Arabia:

As #Yemen continues to be bombed by the Saudis, our vigil in #Huddersfield today calls on the UK to #StopArmingSaudi.

And rapper and Mint Press News podcast host Lowkey drew attention to the UK’s overall responsibility in this war:

BAE had 6,300 employees in Saudi helping to use its £15bn worth of bombs on Yemen

5 British special forces were injured fighting there alongside Saudi/UAE forces.

Britain is a direct participant w/forces on the ground.

Meanwhile, this twitter user called for the International Criminal Court to hold the UK responsible:

UK arms company and government officials must be held responsible for their role in aiding and abetting potential war crimes in Yemen. Call on Prosecutor @KarimKhanQC @ICC to secure accountability for the people of Yemen at https://t.co/GL6DN17U7k #StopArmingSaudi pic.twitter.com/vUuwKTTtY0

How is the UK getting away with this?

This war in Yemen has been raging for over seven years, with the death toll approaching 400,000 people. Yet it appears as if little pressure is being brought against the UK for its complicity. If the international community is actually serious about planning “a brighter future in Yemen”, then the UK’s role in supplying and benefiting from the war needs to be front and centre. And the UK needs to be held accountable.