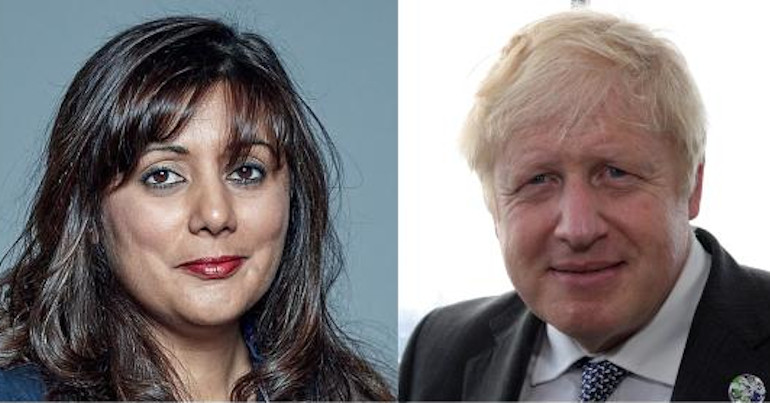 A Tory MP has revealed how rampant Islamophobia is in the Tory Party while trying to defend Boris Johnson.

Speaking on LBC, Tory MP Michael Fabricant said that Nusrat Ghani’s accusations were a “lame excuse” for being sacked because she’s:

What an appalling, disgraceful thing to say. If the Tories wanted to show they were serious about tackling Islamophobia, they could start by removing the whip from Michael Fabricant https://t.co/xWmApQbZvK

Michael Fabricant has a history of anti-Muslim bigotry, and the fact he still retains the Conservative whip is testament to the problem of institutional Islamophobia within the party. https://t.co/NL3dJ9dEav

Ghani was told by a government whip that “Muslimness was raised as an issue” as a reason for her sacking.

A politically vulnerable Johnson has now found himself forced to announce an inquiry into her sacking. It should come as little surprise that Johnson had to be under media – and therefore public – scrutiny to finally announce an inquiry. Ghani’s allegations of Islamophia were downplayed when they came to light two years ago. Instead, Ghani was told to go through the internal party complaints process.

The very use of the term ‘Muslimness’ is yet another reminder of the institutional Islamophobia that runs through the veins of the Tory party:

The Canary’s Afroze Fatima Zaidi has pointed out that the Tory party’s multiple instances of Islamophobia and racism. She has also listed the racial slurs that Boris Johnson has made over the years, from calling Black people “flag-waving piccaninnies” to stating that “Islam is the problem” in the wake of the London bombings. These bigoted comments are repeatedly ignored by a party that is in itself institutionally racist and Islamophobic. And while we have racist politicians in power, people of BAME backgrounds are inherently at risk. After Johnson’s article describing Muslim women as looking like “letter boxes” and “bank robbers”, there were serious consequences for Muslim women. Zaidi said:

In the week following the article’s publication, hate crime against Muslim women rose by an astronomical 375% – a stark reminder of the real-world consequences of racism from those in power. Johnson has repeatedly refused to apologise for these comments.

Of course, Tory racism doesn’t stop at Johnson. It’s important to remember that Ghani herself is instrumental to a party that seeks to divide its population by bringing more and more fascistic legislation into law, and by continuing worldwide domination through bombing Muslim countries.

How to sympathise with someone who used her Muslimness to prop up military, security and prison industrial complexes that actively harmed Muslims in the UK and around the world?

By letting someone else do it. Got zero time for Gani becoming our cause célèbre.

The announcement of the Ghani inquiry comes after a long line of disgraceful racist policies and actions since the Tories came back into power. Zaidi pointed out that:

what’s also beyond doubt is the racism inherent in Tory policies over the last ten years. The Hostile Environment and Go Home vans, the mishandling of Grenfell, the Windrush scandal, the flourishing of the Prevent strategy, all happened under Tory rule.

So we probably shouldn’t be surprised by Johnson’s handling of Ghani’s dismissal, nor should we be surprised by the comments being made by Tory MPs defending the prime minister.

Statistics just published by Birmingham University have revealed that the Gypsy and Irish Traveller communities are  “least liked” in the UK, followed by Muslim people. With politicians like this having sway over the population, and with a mainstream media quick to parrot racist politicians, it’s tragically unsurprising.