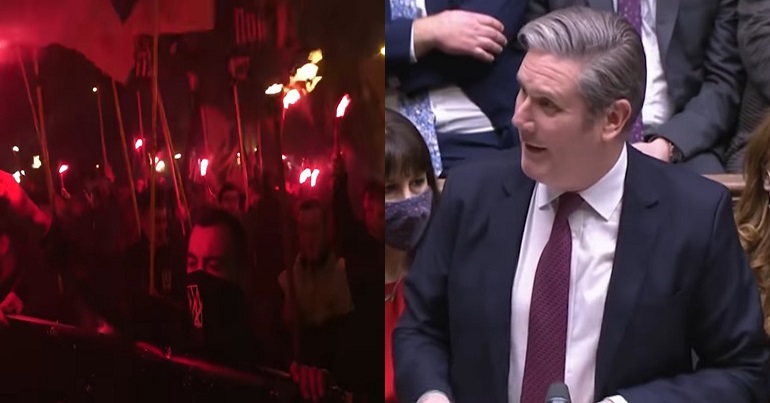 Writing in the Telegraph on 21 January, Labour Party leader Keir Starmer beat the drums of war saying Britain must “stand firm against Russian aggression”. Starmer wrote this as tensions between Russia and Ukraine increase amid reports that Russia is amassing troops on the Ukrainian border. Even more worrying is the support he’s offering a government that voted against adopting the UN resolution to combat the glorification of Nazism.

Under Starmer’s leadership, Labour suspended Jeremy Corbyn when he refused to retract his comment saying the scale of antisemitism in Labour was “dramatically overstated”. Yet he still wants the UK to stand in solidarity with a Ukrainian government that supports actual antisemites.

Instead of using tokenistic diplomacy to call for solidarity with Ukraine, Starmer could use his position to deescalate the current crisis and call out western military expansionism. Unfortunately he doesn’t. So not only is this hypocrisy, but it’s rhetoric that risks all-out conflict between nuclear superpowers.

Starmer laid out his explicit support for Tory defence policy and called on the UK to stand in solidarity with Ukraine:

I must commend the work of the Secretary of State for Defence, Ben Wallace, on this matter. He has worked hard to bring people together, written with moral clarity on the nature of Russian aggression and ensured that the UK continues to support Ukraine’s ability to defend itself through military aid.

Meanwhile this Twitter user was among others who pointed out Starmer’s hypocrisy. He made reference to the Ukrainian National Guard’s Azov Battalion which has neo-Nazi links:

Russia has very real reasons to fear that the Ukrainian army will attempt an attack on the Donbass -a region with many ethnic Russians
A Ukrainian Army that literally includes Neo Nazi formations like the Azov battalion- pictured here pic.twitter.com/dZ3IP9pXF7

Leading Britain towards war in European and American far-right/neo-Nazis' "field of dreams", Ukraine. Starmer's idea of antisemitism is very malleable if he's on the same side as the nutters who want this war. 😡 https://t.co/IJk4cgFeSd

Parts of Starmer’s article read as if he was trying to pursue a diplomatic resolution to current tensions. But it wasn’t long before he mentioned the use of “allied troops”:

We must continue to explore diplomatic routes to avoid conflict. But Russian demands that Ukraine give up its desires to join Nato and the EU should not be entertained. Nobody envisages British and allied troops being dragged into war. But we need to work with allies to use our collective resources, including sanctions, to show Russia the actions it takes will have consequences.

Some called him out as a “warmonger” and made comparisons with Blair:

Now its @Keir_Starmer of @UKLabour Party backing to GO to WAR with Russia to support the Nazis in Ukraine. pic.twitter.com/cquuma15sS

Nato has been building up pressure against Russia since the cold war ended. Ukraine government incldes far-right. Putin is an authoritarian, right winger. You represent the corporate gravytrain and warmonger faction of Labour.

Starmer’s article typifies the mood of Western mainstream media. That is, one which labels this build up of Russian troops as an act of “aggression”. However, this infographic highlights the global presence of the US and UK military. And it includes a US military presence near Russia’s borders. Yet that doesn’t seem to get the same coverage in that same media:

It could be that Starmer’s Labour sees this as its route to No.10 – out Torying the Tories – as they compete with the Conservative Party to face down ‘Russian aggression’. A dangerous game that could add to the thousands who have already died in Ukraine, and possibly further afield. Not only is diplomacy the obvious answer, but so too is an end to the tension caused by Western military expansion.