Biden may have thrown the left a few bones, but he's keeping some of Trump's worst policies in place - The Canary 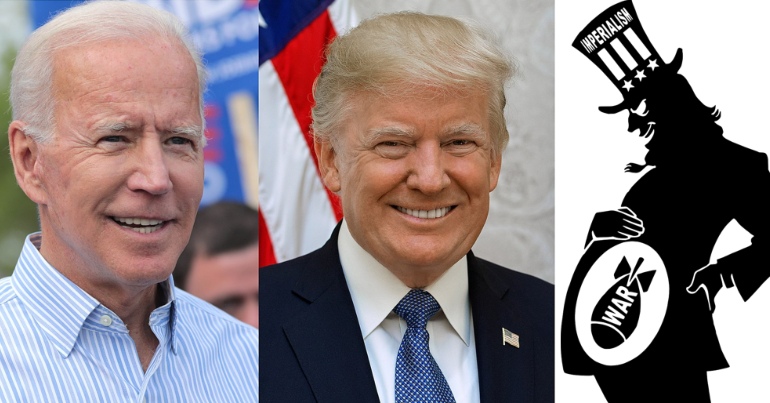 Recently elected US president Joe Biden is claiming that his administration will herald a new era following the disastrous and reactionary Trump presidency. And he’s also claiming to listen to the progressive wing in his party’s base that supported the candidacy of Democratic primary runner-up Bernie Sanders. But though he has followed through on some of these promises, he’s also left several of Trump’s worst policies completely untouched.

We shouldn’t be surprised, though. Because, as The Canary has argued on many occasions, the Democratic Party to which he belongs has long been little more than a slightly watered-down version of the Republicans. And that leaves open the question about whether the US needs a third political force to challenge the bipartisan status quo.

As The Canary has previously reported, Biden has taken some positive steps since entering the White House last month. He re-entered the US in the Paris climate accord, which commits the world’s leading nations to limits on carbon emissions. He also halted construction on the notorious Keystone XL pipeline, which has come under consistent criticism from environmental groups and indigenous North Americans.

Biden has rolled back a number of Trump’s worst immigrations policies, such as the so-called “remain in Mexico” law, which forced migrants crossing the US’s southern border to wait in Mexico until their immigration case has a hearing in the US court system. And he’s reversed a number of deals with Central American nations that curtail rights for migrants from those countries to seek asylum in the US.

However, the Biden administration is also keeping a number of its predecessor’s worst policies in place. Amongst these is the notorious US ‘Space Force’, which commits the US to a militarization of outer space. As The Canary reported, the idea was roundly mocked at the time of its announcement. Progressive congress woman Alexandria Ocasio-Cortez, meanwhile, pointed out in one barbed tweet how the US government seems to prioritize spendthrift military programs over meeting the needs of its own population:

“But how are we going to pay for the Space Force?”

Oh wait sorry – we only ask that when it comes to healthcare, education, and saving the planet. https://t.co/J4Z1QVrDue

Other Trump era policies that Biden isn’t overturning include his trade deal with Canada and Mexico that replaced the North American Free Trade Agreement (NAFTA). As The Canary has previously argued, NAFTA was indeed a disaster for workers in the US and Mexico alike, but Trump’s replacement was little better and included some of NAFTA’s worst provisions. A better idea would have been to either sign a trade deal with much stronger labor accords and environmental protections or else scrap it entirely.

Including possibly the worst of all

Of all the policies that Biden has left intact from the Trump administration, however, the worst must surely be those relating to US-Israeli relations. Biden has not only failed to condemn, but actively praised the Trump-era US-brokered deals. These deals normalized relations between Israel and other Middle East nations without extracting any meaningful concessions from Israel, and which excluded Palestinians from the negotiating table. This included deals with the United Arab Emirates and Bahrain, which Trump presided over in the final months of his presidency.

We shouldn’t be surprised, though. When it comes to unconditional support for Israel, no matter how outrageous its behavior, the two major US parties are largely as bad as each other. And as The Canary has extensively reported, Israel has shown itself to be one of the most flagrant human rights violators in the world today. In addition to presiding over a brutal occupation of the West Bank and the Gaza Strip, it frequently demolishes Palestinian homes, builds settlements in occupied territory in violation international law, and kills unarmed civilians including children as young as 15 months old.

Trump only elevated the US’s aiding and abetting of Israel’s actions to a marginally worse level from an already high base of complicity. And this is just one example of how the US essentially has two right-wing parties that differ with each other only on the minutest of detail on most major issues.

Time for a third force

This ultimately raises the question of whether the US needs a third political force that represents socialism, human rights, ecology, and peaceful coexistence with other nations around the world. Clearly, though the Biden administration is making a few moves in the right direction, taken as a whole it is shaping up to be just one more center-right Democratic Party administration like those of his predecessors Barack Obama and Bill Clinton. And that’s not a good thing.