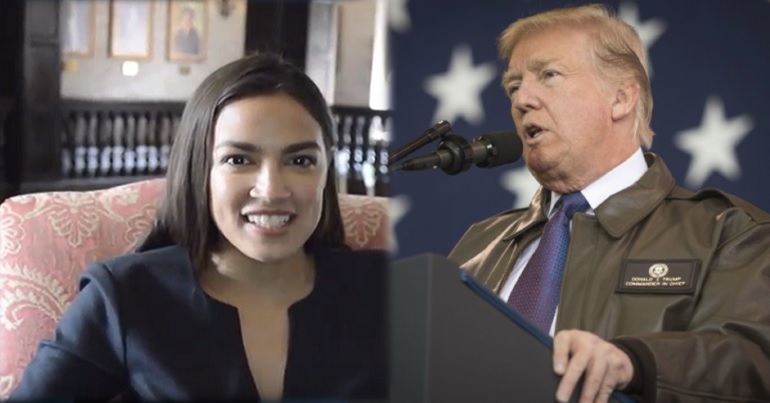 Fortunately, rising socialist star Alexandria Ocasio-Cortez had the perfect response for him on Twitter.

On 9 August, US Vice-President Mike Pence announced that the Trump administration will submit to congress a bill to establish a ‘Space Force’. This new branch of the military would be dedicated solely to military operations in space. Pence said he hopes the program will be operational by 2020. He also provided an operational cost estimate of roughly $8bn per year.

The proposal – and its cost in particular – has sparked strong reactions on Twitter. And Ocasio-Cortez had one of the best takedowns of all.

The openly socialist 28-year-old has attracted widespread media attention since beating establishment Democrat Joe Crowley in a New York primary race. And reacting to the ‘Space Force’ announcement, she pointed out that, while Republicans perennially claim there isn’t enough money for government spending that actually helps ordinary people, there always seems to be enough when it comes to the military. She tweeted:

“But how are we going to pay for the Space Force?”

Oh wait sorry – we only ask that when it comes to healthcare, education, and saving the planet. https://t.co/J4Z1QVrDue

She then elaborated, tweeting:

Things We Refuse to Pay for:
❌ Just Recovery for Puerto Rico🇵🇷
❌ Medicare for All
❌ Tuition-Free College

Other progressives add their voice

Other commentators on the US left took a similar line. Rolling Stone’s Tim Dickinson tweeted:

Some pointed out that the move would largely benefit military contractors rather than provide any actual defense capacity. The Daily Beast’s Spencer Ackerman, for instance, tweeted:

On the one hand, Space Force is a foolish idea that solves no actual problems, but on the other hand, it's a great way to transfer taxpayer money to defense contractors

Amongst members of congress, who will ultimately decide whether the proposal comes to fruition, reactions were mixed. Unsurprisingly, Republicans have generally been supportive of it, while Democrats have generally been opposed. Republican Congressman Mo Brooks, for instance, said that he “strongly commend[s] President Trump for his bold leadership in this area.” Democratic Senator Bill Nelson, on the other hand, said back in June:

The president told a US general to create a new Space Force as 6th branch of military today, which generals tell me they don’t want. Thankfully the president can’t do it without Congress because now is NOT the time to rip the Air Force apart. Too many important missions at stake. https://t.co/uYzqg1W8nE

Though he opposes the ‘Space Force’, Nelson’s stance is telling when contrasted with that of Ocasio-Cortez. Whereas he only appears willing to criticize the plan on its own narrow terms, Ocasio-Cortez puts her criticism into a wider context of priorities in public spending. Her tweets also point out the dishonest way in which Republicans, establishment Democrats, and mainstream media commentators discuss public spending.

Clearly, this episode again shows the need for progressives to take the helm of the Democratic Party to achieve true social change and resist the Trump agenda.

– For information on truly progressive candidates in the US, see Our Revolution and Justice Democrats. If you’re a US resident, you can also join and participate in the activities of the Democratic Socialists of America. And if you want more voters to choose the best candidate over the best-funded candidate, then support anti-corruption groups like Move to Amend, Represent.US, and Wolf-PAC.