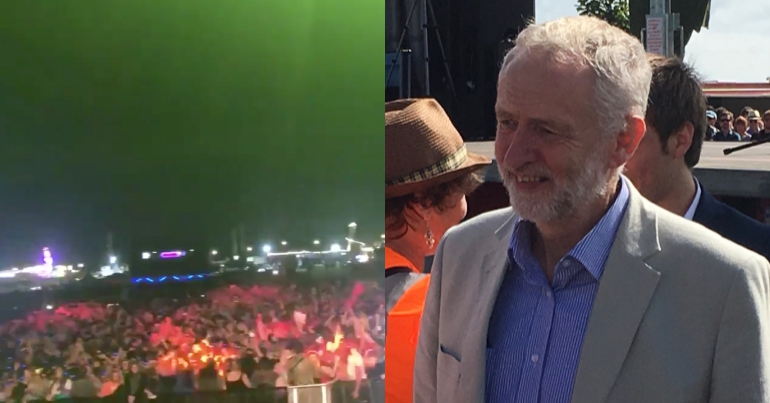 If you only read the establishment media, you could be forgiven for thinking that things are looking bad for Jeremy Corbyn. Constant attacks and accusations of antisemitism fill column inches and news bulletins – often with scant regard for the facts.

But festival-goers in Cornwall showed that backing for Corbyn is still strong amongst his grassroots supporters; or ordinary people, as they’re otherwise known. Combined with the fact that Labour is still leading in the polls, it suggests that – away from the mainstream media bubble – people still believe that Corbyn is the best chance this country has at the moment for a better, fairer society.

DJ Dan captured the scenes at the Boardmasters Festival. 18,000 people gathered for what he described as “the biggest Silent Disco ever in the world”:

And as Twitter users pointed out, this wasn’t a pre-planned stunt, but people genuinely showing their support for the Labour leader:

But that doesn’t fit the narrative…

This level of support might come as a nasty surprise to Corbyn’s detractors, who appear to have spent much of the summer vilifying him:

Hey @afneil what were you sneering about "peak Corbyn?"….I think you and your fellow Tory MSM/BBC shills are going to need a bigger smear….#ohjeremycorbyn @jeremycorbyn #jc4pm https://t.co/zqVzCBlOjB

“We won’t be silenced”

It may have been a ‘Silent Disco’ – but one Twitter user summed up the general mood: “We won’t be silenced”.

#JC4PM What could be more heartwarming to hear than the 'oh Jeremy Corbyn' chant at the worlds biggest silent disco. We won't be silenced. https://t.co/RAy7MUJhzT

Another social media user nailed why so many people support Corbyn:

@SkyNews @KayBurley
Why vilify Corbyn ALL the time, start holding this big awful Tory government to account ! Homelessness, attacking the disabled, hungry children !! Corbyn is a man of peace, can you not see that ?

Just over a year since Corbyn “increased Labour’s vote share more than any of the party’s leaders since 1945”, it appears that manoeuvring is taking place to oust him as Labour leader. It’s almost as if, like festival season, it’s now an annual August tradition. But these scenes suggest that, outside of the Westminster media bubble, support for Corbyn is as strong as ever.

And this will terrify those who think they can topple him.

Featured image via screengrab and author’s own