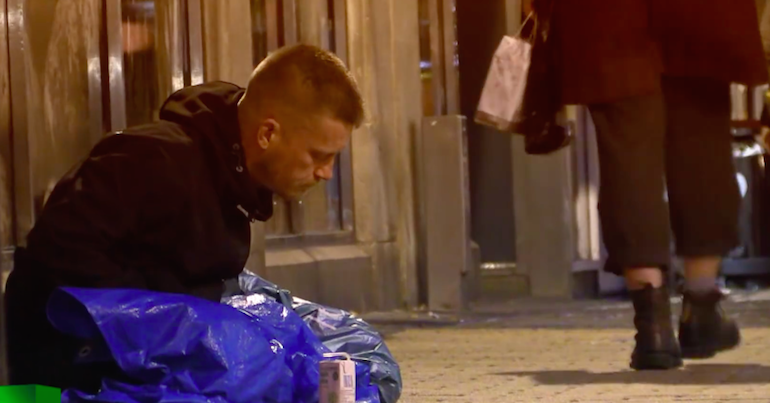 An investigation by The Bureau of Investigative Journalism (TBIJ) into Northampton Nightshelter has found that the homeless shelter had been turning away rough sleepers despite only being half full last winter.

Northampton Borough Council set up the shelter in an effort to help homeless people during the cold winter months. Now, TBIJ has revealed that:

homeless people have been turned away while there were spaces at the hostel, which was only 52% full on average between November and February. During the same period, seven homeless people died.

Northampton Nightshelter is not a walk-in shelter. Instead, it works on a referral basis. That means that, in order to be admitted, homeless people need a referral by an agency. The agencies send a referral form to the Conservative-run council, which then makes a decision about admission.

The shelter has an extensive list of demands that need to be fulfilled by the applicant before they are admitted. As TBIJ reports, this includes a full six-page referral form from an approved agency along with five years’ worth of previous addresses. And if the applicant is currently on the streets, meticulous details of where the applicant has been sleeping are required. Should the applicants be unable to provide enough information on these forms, they will be turned away.

The realities of these strict measures were brought to light last year when a homeless man with learning disabilities had eight toes amputated after contracting severe frostbite. The shelter kicked the man out after one day upon discovering he had unpaid rent at a former accommodation.

A local homelessness worker told the TBIJ that requirements were used to “exclude people with the most challenging behaviours”. He states:

the bar is set very high and accordingly a lot of people don’t hit it. It isn’t a night shelter in anything other than name. It’s a high-threshold controlled-access hostel

The council responded by telling TBIJ:

Nightshelter accepts a significant number of people who are likely to, or are very likely to, cause a problem due to their substance misuse, their mental ill-health or their other vulnerabilities.

The rigorous process may also deny access to those not connected to the local area or local services.

Some say that the local area policy sees the shelter discriminate against the town’s relatively high homeless Eastern European population. The same homelessness worker told the TBIJ that “the local connection rule particularly affects people from eastern Europe… [they] believe there’s no prospect of ever getting housed so why even bother?”. This rule can block homeless people from access to the shelter unless they’ve been in Northampton for six of the past 12 months.

The council disagrees that this is the case, saying:

The Nightshelter has been used by a total of 45 non-UK nationals… these include 22 men from eastern Europe, 9 from western Europe, 11 men from Africa and 3 from other countries.

A member of the council told the TBIJ that he thought criticism was “unfair” and argued that despite being half full, “80% of referrals to the shelter have been admitted”. However, he highlighted that he didn’t want the shelter at full occupancy because “the more people that are there the less effective the service will be”.

Of the seven homeless people that died during the winter months, three were known to be sleeping rough. According to the Northampton Chronicle, 12 homeless people have died on the streets since July 2017. Homelessness charity The Hope Centre says there are currently 48 known rough sleepers in Northampton. But Northampton councillor Stephen Hibbert disputes these figures.

The heartbreaking realities of this investigation come just as some councils in Britain begin to collapse. In fact, as the TBIJ reports,  Northamptonshire County Council is being hit with a £70m cut to funding. The county council is planning to cut funding to all services, including those relating to homelessness. And other councils, like East Sussex, look set to follow suit.

Danielle Stone, Labour group leader on Northampton Borough Council, has written in a letter to the Guardian:

We are all the poorer because of government austerity measures that have seen billions taken out of local government funding… The Local Government Association tells us that the funding gap is now £8bn. This is the money councils need to provide good children’s services, adult care, pothole-free roads. We pay our taxes and we need our services. Tory governments have always undervalued local government but this feels vengeful, as if they want our councils to fail. It’s all part of their campaign to shrink the state…

It’s now beyond doubt that Conservative austerity is contributing to an increase in homelessness. Statistics previously reported by The Canary support this:

Councils must do better

As winter approaches, government and councils must do better in caring for homeless people. All councils, not just Northampton, need to take action to ensure inclusive and well-supported shelters are available for all homeless people.

– Read our other articles on homelessness.