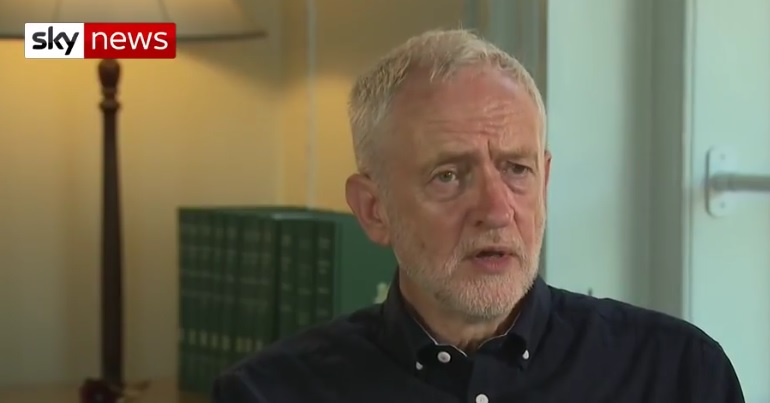 A Sky News reporter has gone rogue and challenged the latest smear against Jeremy Corbyn.

British media outlets released another ‘scoop’ about the Labour leader on 14 August. Except they didn’t give readers the whole story, as Sky News‘s Tom Rayner pointed out.

The Telegraph released a picture of Corbyn making the four-finger ‘Rabaa’ sign while reportedly visiting a mosque in 2016. It claimed the hand gesture is “a symbol of the Muslim Brotherhood”. Egypt designated the organisation a terrorist group in 2013. The UK, however, does not currently proscribe it as a terrorist organisation.

There isn’t a universal understanding that the Rabaa sign is a symbol of the Muslim Brotherhood, though. So, Rayner got into a debate with a “counter-extremist activist” quoted by the Telegraph in its article.

The “activist” is Maajid Nawaz, founding chair of the Quilliam Foundation. This is a ‘counter-extremism’ thinktank which has received funding from the UK government and a US philanthropic organisation “with close ties to the Tea Party and extreme right-wing Christian networks”. Quilliam also “facilitated” Stephen Yaxley-Lennon’s (aka Tommy Robinson) departure from the English Defence League – and allegedly paid him £8,000 for his “outreach” in Muslim communities.

Maajid, the people Corbyn is pictured praying with are senior Palestinian Authority figures – people foreign office ministers meet regularly. And the 4 finger Rabaa gesture is in memory of the nearly 1000 Egyptians people killed by their own army on a single day. Details matter.

In Egypt, people effectively voted in the Muslim Brotherhood by electing Mohammed Morsi as president in 2011. But a military-led coup overthrew Morsi and installed General Abdel Fattah el-Sisi as leader instead. When people protested against the removal of Morsi, the army slaughtered over 800 of them in one single day. And the Rabaa sign is a symbol of those killings. In fact, as Rayner explains later in his discussion with the “activist”, the hand gesture wasn’t around before that massacre:

There’s no need to get personal. I’m not trying to nuance anything away. The symbol didn’t exist before Rabaa. Rabaa was the largest mass killing of a civilian population on a single day since tianamen square. The people killed were MB supporters. I think those details matter.

The good, the bad and the ugly

Rayner made clear, however, that he didn’t agree with Corbyn ‘associating’ himself with the Muslim Brotherhood by honouring these victims:

But commemorating those slain in the massacre does appear to be Corbyn’s intention. A spokesperson for the Labour leader said Corbyn was “standing up for democracy” with the gesture. They added:

The four fingered gesture is a well-known symbol of solidarity with the victims of the 2013 Rabaa massacre in Cairo.

Clearly, Corbyn has backed the ‘wrong’ victims in the eyes of the media. Because these 800+ people protested against the overthrow of their democratically-elected Muslim Brotherhood-backed leader, they’re apparently not worthy of commemoration.

Of course, the media isn’t shitting all over their memory just for the sake of it. In the ‘get Corbyn’ campaign, doing so fulfils quite a useful function. But not all journalists in the mainstream media seem willing to toe the line, as Rayner has just proved.