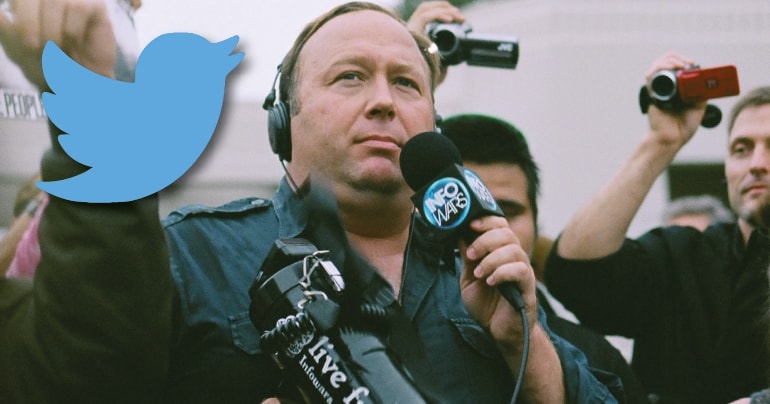 Apple, Facebook, YouTube, Spotify, and Vimeo recently removed the main output of the InfoWars conspiracy site. The most noticeable internet giant that hasn’t removed InfoWars is Twitter. But a consumer rights activist is now trying to change that. She’s doing so by making Twitter a less beneficial place for those who fund it – the advertisers.

InfoWars is a long-running conspiracy site run by Alex Jones. The conspiracies he has peddled include:

Although these all sound ridiculous, they can have real-world consequences. In June 2017, a judge sentenced Edgar Maddison Welch to four years in prison for opening fire in a pizza restaurant. He’d gone there to ‘investigate’ and potentially free child sex slaves. Jones later apologised for pushing Pizzagate following talk of legal action.

Pizzagate isn’t the only conspiracy that’s brought Jones legal issues, though. He’s currently being sued for defamation by relatives of children and teachers killed in the Sandy Hook massacre. Jones alleged that Sandy Hook was staged, and some of the families have been subjected to harassment as a result of this conspiracy.

Shannon Coulter, a consumer activist and co-founder of Grab Your Wallet, has a plan to make Twitter drop InfoWars:

Good morning! To encourage Twitter to drop Alex Jones, I just blocked the Twitter accounts of every Fortune 500 company w/ a Twitter presence. Ready to mass block Twitter's most lucrative advertisers with me? There are three quick & easy ways. Instructions are in this thread.

Coulter’s plan makes it simple for users to mass-block companies. This is bad for advertisers, as they can’t advertise to anyone who’s blocked them. The thinking is that, when these companies get wind of the tactic, they’ll put pressure on Twitter. If Twitter dumps Jones and InfoWars before then, Coulter will cancel the block-list.

The campaign is picking up steam:

We're at 48,153 subscribers to the block list now. We may hit 50k sometime within the next few hours. Remember, many others have done the CSV and manual blocking methods. #BlockParty500

Good question.The primary way they'll know is that if enough people do this, news outlets will write about the fact that the mass block is happening. Here's #GrabYourWallet's press coverage to date: https://t.co/aDbQdICgui

Twitter has been slow in dealing with hate speech on its platform. It did begin to enforce a new terms of service in late 2017 that saw several accounts suspended. But regarding Jones and InfoWars, Twitter CEO Jack Dorsey has claimed that:

We didn’t suspend Alex Jones or Infowars yesterday. We know that’s hard for many but the reason is simple: he hasn’t violated our rules. We’ll enforce if he does. And we’ll continue to promote a healthy conversational environment by ensuring tweets aren’t artificially amplified.

CNN showed, however, that both Jones and InfoWars have published a great deal of content that violates Twitter’s rules:

Content that appears to violate Twitter’s rules appears over and over again in the hundreds of hours of video available on the accounts… Jones has repeatedly degraded individuals of the Muslim faith. He has attacked people on the basis of gender identity. And he has engaged in the harassment of individuals.

Twitter itself is now claiming these tweets are okay because they were posted before the site changed its terms of service. Jones and InfoWars have since deleted a number of tweets.

No profit from hate

All of the internet giants have been slow to deal with sites like InfoWars. Twitter has been the slowest of all, but that doesn’t mean it won’t change. This is especially true if activists like Coulter can keep hitting the site where it hurts – in its wallet.