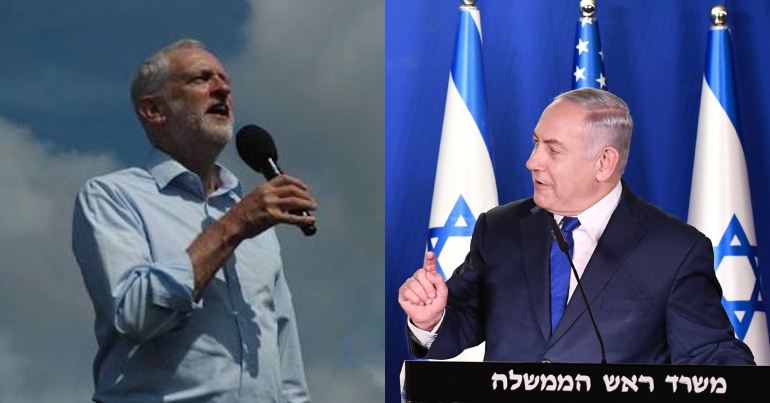 On 13 August, Israeli prime minister Benjamin Netanyahu launched a blistering attack on Jeremy Corbyn. But Corbyn’s response was swift and spectacular. Corbyn showed, without doubt, that he is ready to lead the country as a new kind of leader; one who stands up for oppressed people around the world.

On 11 August, the Daily Mail claimed that Corbyn had taken part in a wreath-laying ceremony “near the graves” of “Palestinian leaders believed to be connected to… [a] terror attack on Israelis at the 1972 Olympics”.

Corbyn issued a statement to put the record straight, saying:

A few hours later, Netanyahu responded on Twitter. But Corbyn came straight back, saying his claims were “false”:

Israeli PM @Netanyahu's claims about my actions and words are false.

What deserves unequivocal condemnation is the killing of over 160 Palestinian protesters in Gaza by Israeli forces since March, including dozens of children.https://t.co/H5nXqi3pnU

I stand with the tens of thousands of Arab and Jewish citizens of Israel demonstrating for equal rights at the weekend in Tel Aviv.

Israel is in violation of over 60 UN resolutions, while its Occupation policies violate several articles of the Fourth Geneva Convention and a range of international human rights and humanitarian laws.

What’s more, in 2017 the UK also licensed record numbers of arms sales to Israel. According to CAAT, this was £221m in 2017, bringing the total to £340m since its 2014 bombing campaign in Gaza. As the Guardian reports, Israel is now the “eighth largest market for UK arms companies”.

And as rapper Lowkey pointed out, “wreaths don’t kill people”. Arms sales do:

Wreaths don’t kill people but £490 million worth of arms sales from Britain to Israel since 2014 do regularly. Pretty much every Friday, you intellectual robots masquerading as journalists.

Shadow chancellor John McDonnell explained that Corbyn has “devoted his life to promoting justice and peace”:

Jeremy Corbyn has devoted his life to promoting justice & peace &,yes,at times that means meeting people who haven’t shared those ideals because only dialogue can lead to peace.Having a politician like Netanyahu join the media feeding frenzy is a line in the sand.Enough is enough

That was a fact which Labour MP Chris Williamson also reiterated:

3).
Support for Jeremy Corbyn is hardening. The vilification is driving more Labour voters to join the party because they believe he is on the right side of history in terms of addressing inequality by creating an economy for the many not the few and promoting world peace.

In 2017, Corbyn also explained that his “whole life” was about “the search for peace”:

See this 2017 interview in which Jeremy Corbyn confirms he was at a peace conference in Tunis 4 years ago to remember those Palestinians & Tunisians killed in an Israeli air strike in 1985.
‘My whole life is about the search for peace’ pic.twitter.com/AAKPg5eeJ1

In 2018, Israeli forces have already killed a record number of Palestinian children “outside of large-scale Israeli military offensives”, according to Defence for Children International Palestine. Meanwhile, the UN has warned of “enormous risks” to the people of Gaza after Israel blocked fuel supplies.

Netanyahu’s government is behind these acts. And thousands of people who believe in peace stand by Corbyn.

As a direct result of Netanyahu’s criticism, Corbyn has shown himself to be a new kind of leader – one who’s willing to show solidarity with Palestinian people and millions of other people who face the consequences of oppressive governments every day.

Featured images via author’s own and U.S. Embassy Tel Aviv/Wikimedia