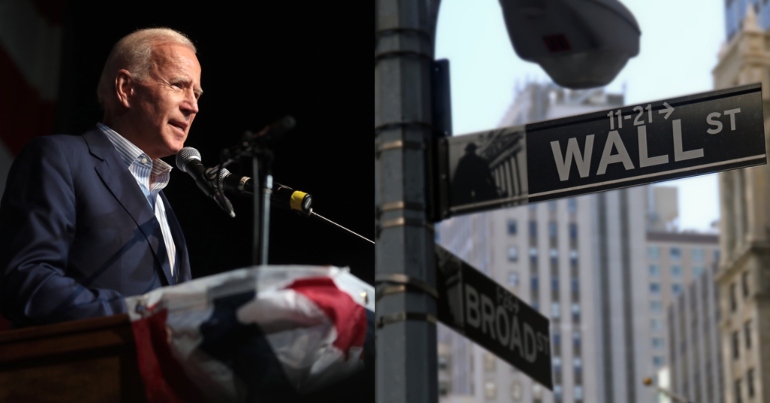 As The Canary recently reported, US president-elect Joe Biden has already begun stacking his incoming administration with a veritable who’s who of US imperialist warmongering. Many of these figures were veterans of Barack Obama’s presidency, which was in many ways little better than that of his predecessor George W. Bush.

Now, Biden has signalled that he has no intention of taking domestic policy in a more progressive direction either. In recent days, there are reports that Biden is beginning to appoint a familiar cast of Wall Street insiders to major cabinet roles. This shows he has no interest in reforming the US’s bloated and destructive financial sector. And this will likely have consequences well beyond the US’s own national boundaries.

Without radical reform, the world could be in for another financial crisis like the infamous capitalist crash of 2008. And that could mean another global economic meltdown is on its way.

On 3 December, Bloomberg reported that Wall Street bosses have been lauding Biden’s picks for his new administration’s economics team. The article says:

The Biden team is poised to include alumni of finance, venture capital, private equity and asset management.

This was met with elation among people with ties to the US finance sector. As one former partner of the notorious investment banking outfit Goldman Sachs himself put it:

Everybody I’ve talked to, including people on Wall Street, seem very delighted with the selections…

Nobody has said to me that this is really disappointing. In fact, it’s the opposite. They’ve just said, ‘This is great.’

No Warren appointment leads to sighs of relief

A cause of particular relief from Wall Street was Biden’s decision not to appoint senator and former Democratic primary candidate Elizabeth Warren as Treasury secretary. Warren does not identify as a socialist and isn’t as progressive as fellow primary candidate and eventual runner-up Bernie Sanders. But she has nonetheless advocated for radical reforms to the US finance sector such as breaking up the big banks.

Biden will instead nominate Janet Yellen. Though not a former Wall Street executive (and, if confirmed by the Senate, would be the first woman in the role), as a former chair of the US Federal Reserve she represents the establishment, Washington insider option. As Bloomberg put it, she’s “a consensus pick” whose nomination is “enough to placate the finance industry”.

All of the above confirms what The Canary has argued on multiple occasions – that the US essentially has two right-wing parties that represent rival factions of the same status quo. In fact, the Democratic Party is arguably even more beholden to the interests of Wall Street than the Republican Party. During both the 2008 and 2012 election cycles, for example, the Democratic Party candidate Barack Obama received more in Wall Street contributions than his then-Republican Party rivals John McCain (2008) and Mitt Romney (2012).

Biden himself has been little different. The Canary has consistently covered the fact that Biden received hundreds of millions of dollars in campaign contributions from billionaires and large corporations. This should come as no surprise given his own political career in the US congress. While serving as senator for the mid-Atlantic US state of Delaware, Biden served as a loyal pawn of the state’s credit card companies and other financial interests. This, in turn, should surprise no one. Delaware has long served as the US’s own internal tax haven. So much so, that the majority of US corporations register their legal structures in order to avoid paying their normal tax burden.

The sordid record of Barack Obama

His association with the Obama administration – in which he served as vice president – is also instructive. As The Canary has also consistently reported, Obama’s economic policies were largely a continuation of his predecessor George W. Bush. For example, he continued Bush’s bank bailout program in which the major financial institutions, whose actions led to the crash in the first place, were essentially rewarded for their greed and mismanagement.

Meanwhile, rather than taking the opportunity to put progressives in his administration, he instead stacked it with Wall Street insiders just as Biden is doing now. He also failed to enact the kind of radical reform necessary to prevent another crash occurring. For instance, rather than enacting a wide-ranging set of new regulatory measures, he supported the passage of the Dodd-Frank Act – a watered-down set of half-measures that even some congressional Republicans supported.

History on course to repeat itself again, and again

Of course, all this opens the spectre of another financial crash happening some time in the future. The 2008 financial crash, which was caused in large part by trade in subprime mortgage debt and other such obscure shady dealings, led to millions of Americans losing their jobs and/or homes. The crisis quickly went global and brought financial ruin to many European countries such as Greece, which descended into outright national bankruptcy. So as with the last one, another crash engineered by the US government kowtowing to Wall Street interests could cause harm well beyond the US’s own shores.

Clearly, the US capitalist duopoly has degenerated into perhaps the greatest threat to living standards and financial stability in the world today. Wherever we might live, progressives must mobilize against the transnational tyranny of US big finance, before it’s too late.