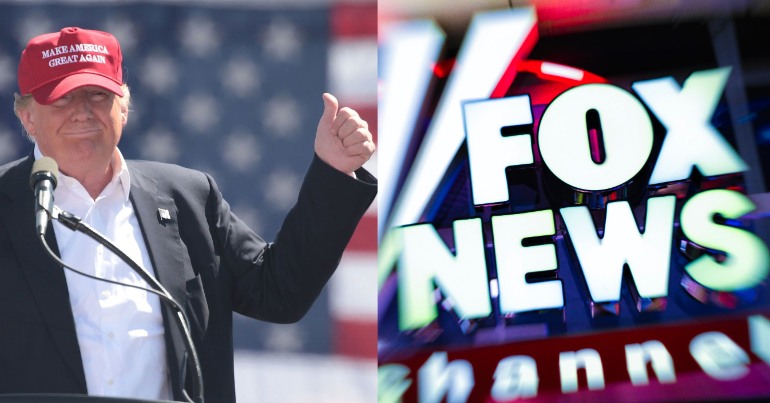 US President Donald Trump’s latest speech was one of his usual rambling and semi-coherent rants. It was filled with the standard litany of misrepresentations, half-truths, and outright lies we’ve come to expect of him. But one comment stood out as particularly revealing.

Though certainly a falsehood, it wasn’t the kind of falsehood that is confined solely to the tangled mind of Trump or the ignorant worldview of his followers. Rather, it has formed one of the centerpieces of right-wing thought in the US since long before Trump entered the political arena. This shines a revealing light on the fundamental nature of the right-wing mindset that is deeply unsettling. And it raises profound questions for progressives about the obstacles that stand in the way of radical change and how we might work to overcome them.

Typical Trump with one exception

On 14 July, Trump delivered a press conference in the White House’s Rose Garden. He boasted about the supposed “big day in the stock market”, which he tried to claim credit for in spite of the fact that markets have been oscillating, mostly as a result of fallout from the coronavirus (Covid-19) pandemic. He engaged in some facile talk about how “people are feeling good about our country”. And he spoke smugly about how he signed “an executive order to hold China accountable for its oppressive actions against the people of Hong Kong”.

All of this seems pretty much par for the course in Trumpland. But about a quarter of the way into his speech, he started to talk about military spending. It began predictably enough as he childishly babbled about how much his administration has purportedly done:

But then came the punchline. Trump claimed:

When I came in, the military was totally depleted.

It’s tempting to pass this off as just a cheap swipe at his predecessor Barack Obama specifically, and his Democratic Party rivals generally. And it’s certainly not the first time Trump has made such a claim. In September 2019, for example, he said that when he entered office the US military had “no ammunition” – a falsehood that was awarded a ‘three Pinocchios’ rating by Washington Post fact-checkers.

But the idea that the Democrats are somehow ‘weak on defence’ and ‘underfund the military’ has been a common refrain of Republicans and their supporters in right-wing media outlets for decades. In 2014, for instance, Fox News reported that its latest poll had found that most North Americans believed that the US had become “weaker under Obama” and that he was “not tough enough on Russia” (note the irony here given their about-face during Trump’s tenure).

The examples are too numerous to list, but essentially the idea goes something like this: ‘the Democrats aren’t really interested in national defence and therefore want to radically reduce military spending’. This notion, however, is completely false. Firstly, the US’s military spending has both increased in some years during Democratic administrations and decreased in some years during Republican ones.

Moreover, the US government has spent more than $300bn on the military per year, every year, since the mid-1970s. In fact, the US not only spends more per year on its military than any country, but more than the next 10 countries’ total military budgets combined. During the most recent Democratic Party administration of Obama, meanwhile, military spending per year never once dropped below the pre-9/11 levels of his predecessor George W. Bush.

What could possibly explain these absurd levels of spending – especially when the US has so many other things that it needs to spend money on, from solving homelessness to addressing child poverty? Essentially, it’s because the US government acts at the behest of the military-industrial complex – the huge private industry that produces the apparatus of war, such as weapons and munitions, tanks and fighter jets, armour and specialised equipment, and so on.

During a speech in 1961, then-US President Dwight Eisenhower (a Republican) issued a dire warning about the threat posed to democratic governance by this emerging phenomenon:

In the councils of government, we must guard against the acquisition of unwarranted influence, whether sought or unsought, by the military-industrial complex. The potential for the disastrous rise of misplaced power exists, and will persist.

…that has played out exactly as predicted

His prediction has proved frighteningly accurate. And since the 9/11 terrorist attacks and the launching of the so-called ‘War on Terror’, the US government’s relationship with the military-industrial complex has increasingly come to resemble a full-blown case of state capture.

In Congress, meanwhile, members from both parties often vote in favour of increases in military spending. This has included figures who are usually characterised as representing the far-left spectrum of mainstream US politics, such as Elizabeth Warren. This is often due to the fact that the aforementioned private companies that make up the military-industrial complex have factories in their congressional districts. And, sadly, many congress members of both parties have bought into the warped logic that ‘I don’t want to cause job losses for my constituents’ (as if people can never be retrained or factories repurposed).

This leads to a second question. If military spending keeps going up, then how can media outlets – even those like Fox News – continue to get away with claiming that Democrats support massive reductions in military spending? The answer is that Fox News and its ilk have constructed an alternate universe with its own unique pseudo-logic and even its own set of ‘alternative facts’.

And even some right-wing commentators have picked up on this trend. David Frum, for example, who was a speechwriter for former president George W. Bush and one of the major cheerleaders for the Iraq War, said during an interview with Thom Hartmann in 2012:

This new wave of Republicans… have been elected in a way that has put them inside… an alternative knowledge system, where they have a specialised set of facts. You know, there’s an old saying, ‘you’re entitled to your opinion, but not to your own facts’. Well, we’ve pushed forward the frontiers of human rights so that people now are entitled to their own facts.

Before the advent of Fox News, Republicans had to speak the same language as everybody else. When we had a common media culture, with all of its biases and prejudices… it forced everybody to speak with certain common frames of reference. …

Republicans had to learn to play in that way. So you could not say… ‘any effort to move money to people who’re unemployed was socialism’, because then the people at the CBS Evening News would treat you like a wild man and you’d be in trouble.

Together forming a deadly mix…

This enables Trump to tell barefaced lies, of which this latest is just one example out of many, yet still continue to be the Republican Party’s candidate for the presidency. Because many (if not most) of his supporters live in this parallel intellectual universe in which reality has been turned on its head and what constitutes fact no longer matters.

The result is a diabolical combination of a nation state that spends unendingly on the military because it’s completely beholden to the military-industrial complex, and a media environment that breeds passive acceptance of this situation by branding even the most modest proposed reduction from Democrats as ‘weak on defence’. This toxic hybrid has created a world characterised by domineering US imperialism and seemingly endless war.

…that makes up the militaristic status quo

As anthropologist David Vine points out, the US currently has about 800 military bases in foreign countries. His book Base Nation: How U.S. Military Bases Abroad Harm America and the World documents how US military presence has caused damage in over 1,000 locations. The US is furthermore currently engaged in wars in seven different countries as well as lower-level (though still extremely harmful) hostilities with Iran, Venezuela, Nicaragua and Cuba.

Clearly, the right-wing alternate universe has not just debased public discourse and debauched the minds of countless people but also has real-world consequences in perpetuating the brutal imperialist status quo of war and destruction across the globe. Two questions, then, must surely confront those who wish to break this status quo.

And we must begin a conversation about how to break it

The first is: How can we work to achieve media reform that a) properly enforces regulations against wilful misrepresentation and b) also challenges the power structures of the current corporate- and billionaire-dominated media landscape? And second: Now that it is all but certain that the Democratic Party is irreformable, how do we build a third force in US politics to break the bipartisan consensus for endless war abroad and constant austerity at home?

There are no easy answers to either of these questions. But progressives must at least begin a conversation about how to address them if we hope to stand a chance of seeing real change.