The US keeps ignoring the antics of one Central American nation, just as it passes sanctions on another - Canary 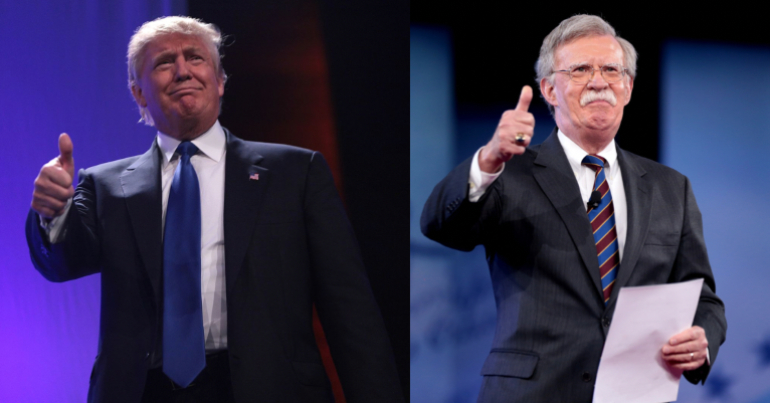 The US has just imposed crippling sanctions on Nicaragua, which John Bolton recently branded part of a so-called ‘Troika of Tyranny‘. Based on this treatment, and the messages in the mainstream media, one would think that the Nicaraguan government’s alleged crimes make it uniquely villainous in the region. But a comparison with its Central American neighbor Honduras reveals this latest move for shameless hypocrisy that it is.

This week, the Trump administration and US Congress formally took action to penalize the government of Nicaraguan President Daniel Ortega. First, Trump issued an ‘Executive Order’ that imposes sanctions personally on the president himself, vice president Rosario Murillo (also Ortega’s wife) and national security advisor Nestor Moncada Lau. According to its text, Murillo and Lau were singled out for their alleged complicity in human rights abuses during the civil unrest earlier this year, and for alleged involvement in corruption.

Shortly after, the US Congress voted to pass the ‘Nica Act‘. This will extend the sanctions to “any current or former official of the Government of Nicaragua or any person acting on behalf of that Government” that is also believed to be complicit. The sanctions also include a restriction on the granting of loans or other financial assistance to the Nicaraguan government from the World Bank, International Monetary Fund, and Inter-American Development Bank.

The sanctions will almost certainly cause significant suffering to the Nicaraguan public. And as is usually the case with sanctions, they are likely to be unsuccessful even on their own terms – and will, if anything, make matters worse.

Events in Honduras: a revealing comparison

But there is a wider issue at play in terms of evenhandedness. Just as these measures were being finalized, several news items from Honduras provided a revealing point of comparison. On 23 November, the brother of President Juan Orlando Hernández was arrested in Miami on drug trafficking charges.

On 29 November, meanwhile, seven men were convicted of the murder of environmental and indigenous rights activist Berta Cáceres. And earlier in the week, Honduran police fired gunshots at protesters who were marking the anniversary of the country’s last presidential election, which was widely believed to have been tainted by fraud, intimidation, and electoral irregularities.

These events highlight Honduras’s ongoing political, economic and social crises, which receive far less attention in the press than problems in countries like Nicaragua and Venezuela. They also demonstrate the brazen double standard that the US takes towards obedient countries – those that serve US geopolitical interests and follow neoliberal orthodoxy – and independent (and usually left-of-centre) governments that defy those interests and resist neoliberalism.

US role in the Honduran coup and aftermath

As The Canary has previously reported, since the 2009 coup against the democratically-elected progressive government of Manuel Zelaya, Honduras has degenerated into an ever-worsening human rights nightmare. State security forces routinely commit extrajudicial killings and acts of torture – including against social activists like Cáceres. This situation has made Honduras one of the most dangerous countries in the world, and has led to a humanitarian crisis. But rather than sanction the Honduran government (as it has done with Nicaragua), the US has been providing it with generous funding – thereby making it complicit in these crimes.

The US State Department, under the direction of Hillary Clinton, actually played a significant part in the coup that removed Zelaya in the first place. Afterwards, it worked to prop up successive post-coup governments and even launched propaganda campaigns to “scrub” their image.

The violence in Honduras is also explicable in part by the ongoing drug war. The arrest of the president’s brother is indicative of how the country is increasingly turning into a narco-state. And this is nothing new. One report earlier this year highlighted how a National Police chief actually facilitated a $20m delivery of cocaine to a drug boss back in 2013.

Interestingly, this is one of the justifications that the US uses for its harsh treatment of Venezuela. The US currently has sanctions on several of the country’s government ministers who it claims are involved in drug trafficking. It has also imposed a financial embargo – that makes it practically impossible for the government to stabilize the economy – and recently even indicated that it might designate the oil-rich country as a ‘state sponsor of terrorism’.

But no similar action has been taken against the government of Honduras – in spite of the fact that there is evidence that government ministers and even the president himself may also be involved in drug trafficking. To the contrary, the US provides it with considerable security assistance funding.

As The Canary has previously reported, the singling out of Nicaragua (along with Cuba and Venezuela) by the Trump administration is based on a highly selective application of outrage over such matters. The late director of the Council on Hemispheric Affairs, Larry Birns, coined the term ‘selective indignation‘ to refer to this double standard, which has been cynically used as a tool for promoting US economic and foreign policy interests.

Of course, though the mainstream media has been grossly misrepresenting the unrest in Nicaragua, its government ought to be criticized for any human rights violations it may have committed. But the US has no moral credibility in its imposition of sanctions given its inaction – and even active aiding and abetting – on similar and worse violations in Honduras and elsewhere in the world.