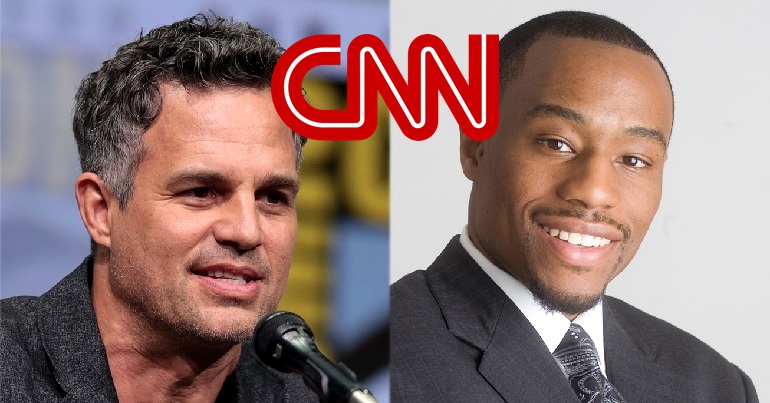 On 29 November, CNN fired a regular contributor – apparently as a result of his firm defence of Palestinian human rights. And award-winning actor Mark Ruffalo has now added his voice to widespread criticism of the decision.

‘It is not antisemitic to criticise Israel’

CNN has kept its comments on the issue to a minimum. But the previous day, CNN contributor and Temple University professor Marc Lamont Hill had called for equal rights for Palestinians and Israelis within “a single secular democratic state for everyone… from the river to the sea“. This refers to one of the potential ways of ending Israel’s violations of Palestinian rights. And the CNN decision appeared to come in response to claims from Israel lobby groups such as the Anti-Defamation League (ADL) that Hill’s comments were somehow ‘antisemitic’. (Note: The ADL has previously faced accusations of fuelling Islamophobia and putting support for Israel above human rights concerns.)

Ruffalo was quick to show his support for Hill:

Criticizing the actions of Israel is not anti-semitism. Since when is advocating for human rights a fireable offense? Join us in standing in solidarity with Dr. @MarcLamontHill: https://t.co/5Sd3b1qdBK

Hill, meanwhile, made his stance very clear in a series of tweets:

My reference to “river to the sea” was not a call to destroy anything or anyone. It was a call for justice, both in Israel and in the West Bank/Gaza. The speech very clearly and specifically said those things. No amount of debate will change what I actually said or what I meant.

Unfortunately, we are in a moment where any critique of the Israeli government is called anti-Semitic. Any call for Palestinian freedom is seen as an attempt to diminish Israel freedom. This does not have to be, nor should it be, the case.

I do not support anti-Semitism, killing Jewish people, or any of the other things attributed to my speech. I have spent my life fighting these things.

Others also expressed their anger and disappointment at CNN‘s apparent capitulation to Israel lobby groups:

This is KEY: how can CNN fire @marclamonthill while keeping onboard @RickSantorum whose views of Palestinians are literally genocidal? Unless the news network's position is that the Palestinians have no rights and no humanity? And only Israel lives and perspectives matter? https://t.co/DUC9v9r1i6

. @cnn needs to admit it made a real mistake firing Marc Lamont Hill today. People clearly misrepresented his speech in wild and dishonest ways. It was a speech about human rights and freedom.

The tactic of accusing critics of Israeli crimes of being antisemitic, however, is nothing new. And as The Canary has consistently reported, Jewish voices have been some of the loudest in calling out this false, dangerous, and cynical comparison.

On 20 November, dozens of Israeli scholars – many of them experts on Jewish history – wrote an open letter telling European governments:

Speaking about Israel’s state ideology of Zionism, they highlighted that there have been many Jewish anti-Zionists throughout history, and “many anti-Semites who supported Zionism”. Therefore, they said, “it is nonsensical and inappropriate to identify anti-Zionism with anti-Semitism”.

They also stressed that:

Israel has been an occupying power for more than 50 years. Millions of Palestinians under occupation lack basic rights, freedom and dignity. As the Israeli occupation is now transforming into annexation, it is essential, more than ever, that Europe rejects efforts to restrict free speech and to silence criticism of Israel on the false ground of equating it with anti-Semitism.

They highlighted that conflating the two “feeds misconceptions that Jews equal Israel – and are thus responsible for what Israel does”. And they asked governments to make “a clear distinction between criticism of the state of Israel, harsh as it may be, and anti-Semitism”. In short, they said:

Don’t mix anti-Zionism with anti-Semitism. And preserve free speech for those who reject the Israeli occupation and insist that it ends.

Renowned Jewish intellectual Noam Chomsky has previously echoed these sentiments. He insisted in 2014 that Israeli representatives have long sought to smear opponents by saying that critical Jews were ‘self-hating’ and in need of “psychiatric treatment”, and that critical non-Jews were antisemitic. Fellow Jewish scholar Norman Finkelstein, meanwhile, agrees that Israel apologists cynically exploit accusations of antisemitism “for an ulterior political motive”.

In the UK, falsely linking left-wing criticism of Israeli crimes to antisemitism has now become a favourite tactic of right-wingers trying to silence critics of Israel’s far-right government. This is visible in the tired smearing of Labour Party leader Jeremy Corbyn – a veteran anti-racist who has consistently opposed antisemitism. While Labour is not immune from antisemitism, it is taking more action than other parties (including the ruling Conservatives) to avoid and prevent discrimination of all types. The mainstream media, meanwhile, has faced serious accusations of “misleading”, ‘distorted’ and “inaccurate” coverage of alleged antisemitism in the Labour Party; and it is all but silent about the Conservatives’ woeful response to “endemic racism” in its own ranks, and about most antisemitic discrimination coming from right-wing groups.

The latest smear target has been Labour MP Chris Williamson. And the allegations are weak, focusing mostly on ‘guilt by association’. This ‘association’ is with people (some of them Jewish themselves) who have faced accusations which rely on manipulatively selective quotes, unfortunately worded but fact-based statements, or offensive past comments they have previously apologised for. The accusers, meanwhile, have been basing their arguments largely on the idea that Israel represents the entire Jewish community; meaning, for them, that criticising Israel is antisemitic.

Williamson has long insisted that accusations of Labour antisemitism “have on occasions been used for factional or party political ends”. But he has also stressed that “anti-semitism is utterly repugnant and a scourge on society, which is why I stand in absolute solidarity with anyone who is subjected to anti-semitic abuse”. Pro-Palestinian group Jewish Voice for Labour, meanwhile, has stood by Williamson, calling him a brave and persistent fighter “for equality and justice”.

Don’t be like Israel. Oppose all racism and all injustice, everywhere.

As +972 Magazine highlighted, Israel has both a historical and recent record of supporting far-right governments around the world while receiving their support in return. It supported apartheid South Africa, Cold War dictatorships in Chile and Argentina, and the genocidal regime in Rwanda. And today, it is moving more and more to the right, becoming bolder in its discrimination as it does so. It’s not just the Donald Trump administration which is supporting Benjamin Netanyahu’s far-right government, either. It’s the far right in Italy, Ukraine, Poland, Hungary, Germany, and beyond – many of which have fascist and antisemitic pasts (and presents).

We must not allow the right to succeed in equating criticism of Israel to antisemitism. We must oppose all racism and injustice, wherever it rears its ugly head. And that means challenging anyone who tries to shut down legitimate criticism of the Israeli state’s occupation and apartheid.