Obama denounces 'strongman politics', but the mainstream media glosses over his own questionable record - The Canary 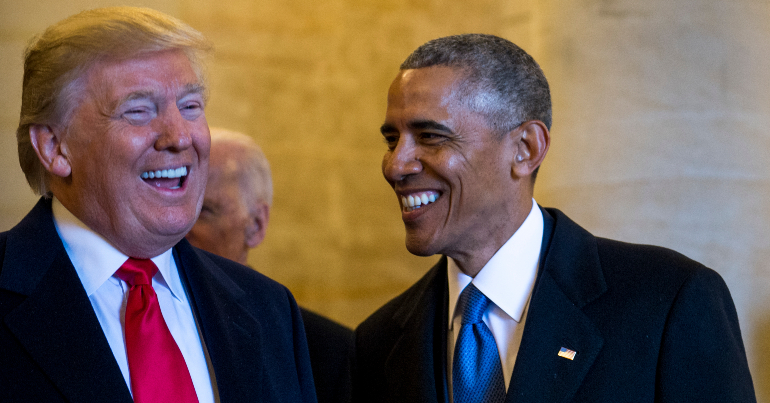 Former US President Barack Obama has just denounced “strongman politics”. But in their rush to agree, mainstream media outlets have glossed over Obama’s own questionable political record.

Obama made headlines on 17 July for a speech in South Africa commemorating the 100th year of Nelson Mandela’s birth. But it wasn’t his tribute to the former South African premier and anti-apartheid activist that received the most attention. Rather, it was his thinly veiled attack on President Donald Trump’s performance at the already infamous summit in Helsinki with Russian President Vladimir Putin earlier in the week.

Though Obama didn’t mention Trump or Putin by name, it was clear who he was referring to. He stated:

Look around. Strongman politics are ascendant suddenly, whereby elections and some pretense of democracy are maintained, the form of it, but those in power seek to undermine every institution or norm that gives democracy meaning.

Obama’s right. The rise of ‘strongman politics’ is indeed worrying. But media commentators were a bit too quick to lavish praise on Obama for his comments. And within their reports was an implicit exaltation of Obama as a venerable former statesman who should be looked up to as a wise old sage whose words carry great moral weight.

The Atlantic, for example, wrote that Obama “finally did what his supporters have waited for him to do since Donald Trump became president. He spoke up.” And Mother Jones swooned over how the speech “concluded on an optimistic note with Obama’s signature vision of hope.” The Huffington Post, meanwhile, titled a video excerpt of the speech “Obama Offers Words Of Wisdom During ‘Strange And Uncertain’ Trump Era.”

These odes to Obama provide a deeply one-sided view of his presidency, which glosses over what in reality was a political program that didn’t differ greatly from the neoliberal and imperialist orthodoxy of his predecessors.

In terms of foreign policy especially, Obama’s record was hardly better than that of George W. Bush – with the odd notable exception. In some respects, in fact, it was even worse. For instance, there were ten times as many covert drone attacks as part of the so-called “War on Terror” during the Obama administration – and more air strikes during Obama’s first year than the entire eight years of the Bush administration. Obama’s drone program killed thousands, including hundreds of civilians.

His Middle East policy, meanwhile, was in many respects an extension or even expansion of Bush’s. Less than a year into his presidency, he had deployed an extra 50,000 troops to Afghanistan in total, doubling US engagement in the country. And in Iraq, he pulled out US troops only to later redeploy ground forces along with fighter jets and hundreds of military advisors. He also failed to close down the Guantanamo Bay detention center despite having eight years to do so and having promised repeatedly during his 2008 presidential campaign that he would.

At the same time, Obama did little to stop his country’s alliance with alleged war criminals and human rights abusers in countries like Saudi Arabia, Israel, and Turkey.

On trade policy, meanwhile, Obama followed Republican ‘free’ trade orthodoxy by signing the Trans-Pacific Partnership. He also supported and signed the US-Colombia Free Trade Agreement, despite having said he was against it while campaigning in 2008. The agreement was widely criticized by human rights activists, Latin America policy experts, and some Democratic members of congress for failing to address anti-trade unionist violence in Colombia, which is among the worst in the world. The horrific costs of the US-Colombia Free Trade Agreement are predicted to include the impoverishment of rural farmers and the flooding of the Colombian food market with cheap US agricultural products, just as happened in Mexico after the signing of NAFTA.

These agreements were passed through congress using the secretive ‘fast-track‘ procedure, which pushed them through without allowing congress members to add amendments or release details to the public.

Regarding immigration policy, meanwhile, hundreds of thousands of deportations took place during Obama’s tenure, with the rate at times reaching 20,000 per month. Deportation rates were actually higher during the Obama administration than they have been under the current Trump administration so far.

At the same time, the Washington Post reported in 2013 that the National Security Agency had “broken privacy rules or overstepped its legal authority thousands of times each year since Congress granted the agency broad new powers in 2008”.

And even Obama’s lauded domestic ‘achievements’ can be subjected to doubt, too. His healthcare reform, for example, did not lead to universal coverage or provide any public option for care provision. It doesn’t remotely resemble the single-payer universal care model that the US left has been advocating for decades. The reform was in fact based on a Republican proposal that was offered as an alternative to the plans spearheaded by former President Bill Clinton in the early 90s.

It would be going too far, of course, to say that Obama’s administration was no better than Trump’s. Because Obama did not stoke xenophobic and racist sentiment. Nor did he attack the press or display such overt authoritarian tendencies.

But Obama is not the solution for the problem of Trump, either. So we should avoid adopting a rose-tinted view of the Obama presidency. And we should never forget that, for the last half-century (at least), successive US administrations from both major parties have been more or less equally ruthless enforcers of the global neoliberal and imperialist order.

We need a real progressive solution to the rise of far-right figures like Trump. That’s the only way we can truly defeat them.

– To see information on truly progressive candidates in the US, see Our Revolution and Justice Democrats. If you’re a US citizen, you can also join and participate in the activities of the Democratic Socialists of America. And if you want more voters to choose the best candidate over the best-funded candidate, then support anti-corruption groups like Move to Amend, Represent.US, and Wolf-PAC.