Trump reveals his 'enemy of the people', and it's got the media petrified [VIDEO, TWEETS] - Canary 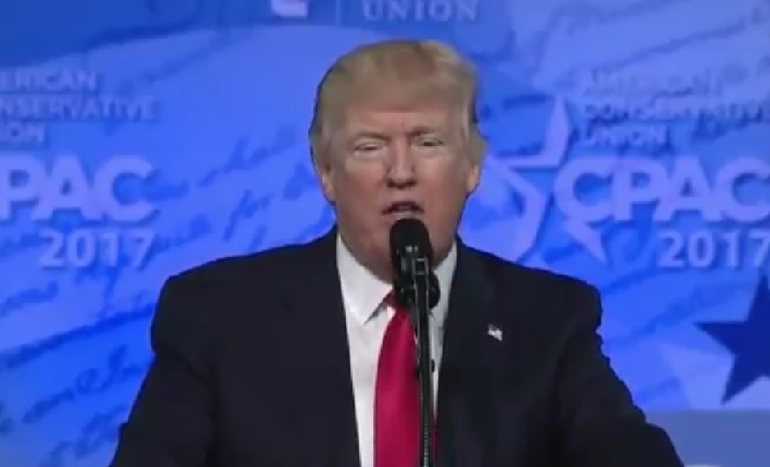 On 24 February, Donald Trump doubled down on a claim he’d made days before about certain media outlets being the “enemy of the American People”. At the annual Conservative Political Action Conference (CPAC), the US President said:

But he also claimed:

In covering my comments, the dishonest media did not explain that I called the ‘fake news’ the enemy of the people. The ‘fake news’. They dropped off the word ‘fake’. And all of a sudden, the story became ‘the media is the enemy’.

Trump’s words are still very worrying, however. Especially when we look at the media outlets that Trump has accused of being ‘fake news’ in recent days.

President Trump again called the media the "enemy of the people," but this time he elaborated. https://t.co/oq9LBk8xMF #CPAC2017 pic.twitter.com/QaSPtG2bJb

So which are the ‘fake news’ media outlets, according to Trump?

It’s totally fair to criticise the corporate media. These outlets are often biased. And very occasionally, they publish misleading or inaccurate information. But this doesn’t mean that everything (or even the majority) of what they produce is a lie. Far from it.

Trump, however, has taken another approach entirely. He has called mainstream organisations like CNN “fake news” since before his inauguration. And on 17 February, he made it very clear which outlets he’s referring to when he speaks of the “FAKE NEWS media”. In fact, he even tagged them in his tweet:

The FAKE NEWS media (failing @nytimes, @NBCNews, @ABC, @CBS, @CNN) is not my enemy, it is the enemy of the American People!

In other words, Trump considers CNN, The New York Times, NBC, ABC, and CBS to be fake news. All of them. The unspoken suggestion being that nothing these outlets report can be trusted; that everything is a lie. A big claim indeed.

But a day later, Trump went even further with his generalisation. He seemed to imply that ‘fake news’ is essentially a synonym for ‘mainstream media’:

Don't believe the main stream (fake news) media.The White House is running VERY WELL. I inherited a MESS and am in the process of fixing it.

In short, when Trump says that ‘fake news’ is the “enemy of the people”, he appears to be referring (at the very least) to a significant part of the mainstream media.

Just let that sink in.