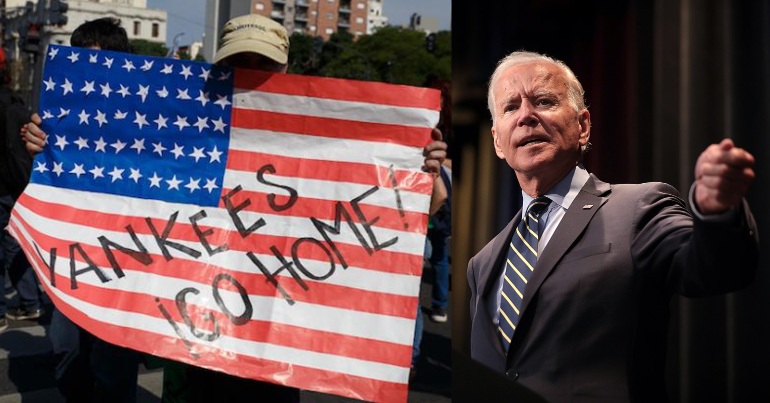 As US president Donald Trump’s hopes of overturning the election result in his favor fade to dust, president-elect Joe Biden has begun making appointments to his incoming administration. And it’s already obvious that those hoping for a new era on foreign policy are likely to be disappointed. Biden’s picks for top cabinet roles show that he has no intention of taking the US off the course of endless war and interference in other countries’ affairs.

On 24 November, multiple media sources in the US reported that Trump finally began allowing a peaceful transition to a new US government led by Democratic Party victor in the November 3 election Joe Biden. This followed weeks of Trump claiming the election had been ‘stolen‘ and launching desperate legal challenges in states across the country. Around the same time, Biden announced some of his personnel choices for his new administration, which will formally take power from the outgoing Trump administration in January of next year.

Some progressives had been holding out hope that Biden would recognize the significant support amongst the Democratic Party grassroots for the real progressive change represented by the runner-up candidate in the Democratic primary Bernie Sanders. But unsurprisingly, Biden has instead begun stacking his administration with a line-up of recognizable Washington insiders who have already proven themselves reliable supporters and practitioners of US imperialism and interventionism. These include:

All of them will need to be confirmed by a majority in the senate, which according to the US Constitution has the power to accept or reject a president’s cabinet nominations by a majority vote. But even if the Democrats do not regain control of the US’s upper chamber of congress, they are likely to secure confirmation. As the Washington Post reported:

They all have long-standing relationships with Republican lawmakers, which could smooth their confirmation hearings and open the possibility of some bipartisanship, and they are well known among NATO and Middle Eastern allies.

Veterans of the sordid Obama administration

Many of these figures are veterans of the presidency of Barack Obama. And as The Canary has previously argued on multiple occasions, the Obama administration’s record on foreign policy was only marginally better than that of Trump, and in some respects even worse. In addition to increasing predecessor George W Bush’s drone assassination program by a factor of 10, for example, Obama also played a hand in regime change in Libya and Honduras.

He failed to fulfil his campaign promises to shut down the notorious Guantanamo Bay Detention Center – where rendition, torture and indefinite detention without trial continue to this day – and to repeal the Patriot Act, which severely curtails basic civil liberties. Obama also continued the US’s long appeasement of human rights violations and flouting of international law carried out by its major allies in the Middle East, particularly Israel and Saudi Arabia.

Many of Biden’s aforementioned cabinet choices were instrumental in implementing some of the Obama administration’s worst foreign policies. As Obama’s secretary of state, Blinken was involved with the US’s increase in troop numbers in Afghanistan and also encouraged increased US meddling in Pakistan. Haines, meanwhile, served as deputy director of the CIA and then deputy national security advisor during the Obama presidency. In these roles, she attempted to suppress information about the Bush administration’s use of torture and was also involved in executing the aforementioned drone assassination program.

Difficult to know which is worse

As The Canary has previously argued, these facts demonstrate how imperialism and endless war has the support of both major US parties. And it’s hard to determine which of them is worse. For instance, while Obama was better than Trump on foreign policy toward Cuba and Iran (renormalizing diplomatic relations with the former and signing the Iran nuclear deal with the latter, both of which Trump at least partially reversed), Trump was actually the first US president in a long time who didn’t start any new wars.

And while Trump did cozy up to authoritarians and alienate traditional US allies in Western Europe, one could argue that a warming of relations with traditional US foes like Russia and North Korea wasn’t such a bad thing when contrasted with previous presidents’ expansion of NATO and encroachment in territories bordering Russia. The fact that things are so far from clear-cut is one of the bizarre side effects of having such little difference between the two parties on foreign policy for so many decades.

The status quo that led to Trumpism

Indeed, it was exactly this Washington status quo of endless war and constant signing of so-called ‘free’ trade agreements that led to the rise of a far-right faux-populist like Trump in the first place. In a strange irony, Trump actually ran to the left of both his own party and the Democrats on issues like foreign intervention and trade deals. For example, he denounced ‘unnecessary war’ and criticized the decimation of manufacturing jobs caused by the North American Free Trade Agreement and the Trans-Pacific Partnership, both of which were supported by his nearest Democratic Party predecessors Bill Clinton and Barack Obama.

Stunningly, even some of the stalwarts of the US corporate-owned mainstream media have seemingly picked up on this. The Washington Post, for instance, pointed out that Biden’s picks had earlier in their careers “promoted the policies that Trump rebuffed, denigrated and used to help fuel his rise to power”. [emphasis added]

Most worryingly, the Biden campaign itself doesn’t seem to have come to terms with this reality. Rather, it has dubbed the Trump presidency “an aberrant moment in time” and has instead sought to present the Obama presidency (in which Biden served as vice president) as some kind of golden era in US politics. In July, while he was still a candidate in the Democratic Party primary, Biden said after his first debate performance:

I’m proud of the job [Obama] did. I don’t think there’s anything he has to apologize for and, I think, it kind of surprised me the degree of the criticism [from the other primary candidates].

In other words, he has no understanding of what led to the rise of Trump nor any intention to steer the US away from the path of endless war. Worse still, history might end up repeating itself. As Branko Marcetic (who The Canary interviewed earlier this year) argued in his book Yesterday’s Man: The Case Against Joe Biden, a Biden presidency might end up simply paving the way for the rise of another far-right faux-populist at some point in the future.

Clearly, progressives must continue to fight against the sordid status quo upheld by both major US parties if we ever stand a hope of breaking this vicious cycle of never-ending death, destruction, and instability across the world.