Obama denounces Trumpism, but fails to mention the key part he played in its rise - The Canary 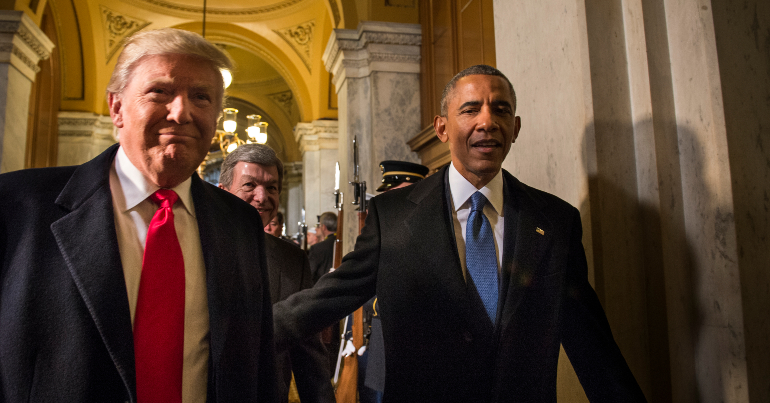 Former US president Barack Obama has again won himself plaudits for denouncing the words and actions of his successor. As always, he spoke as if his own presidency was some kind of success story. But in reality, the rise of Trumpism is in large part a result of Obama’s own failures in office.

On 22 October, Obama gave a speech in Las Vegas. There was a recurrent theme throughout – a warning of the dangers to democracy that the US currently faces. Though he didn’t mention President Donald Trump by name, it was obvious whom he was referring to. He said:

These words express laudable sentiments. And Trump’s behavior since entering the White House has indeed been deeply troubling. From attacks on the press and advocating violence against protesters to trampling over international law and jettisoning diplomatic norms, his presidency is beginning to border on the fascistic.

But Obama talks as if he played no part in the rise of Trumpism. And while it would be going too far to say there is no difference between the two administrations, Obama’s failures set the conditions from which an ultra-right populist movement could take root.

The story begins from the very moment Obama took office in 2009. He had used lofty rhetoric and promises of ‘hope and change’ on the campaign trail. But signs immediately began to emerge that he was a closet neoliberal with little intention of significantly departing from the ‘free’ market orthodoxy of his predecessors.

In the wake of the 2007/8 financial crash, for instance, he had the opportunity (and public backing) to take firm action against the Wall Street excesses that caused it. But instead, he continued George W. Bush’s bank bailout program that kept the major financial institutions afloat and their shareholders’ stocks protected.

Yet while Obama was willing to extend this government largesse to banks to shield them from the consequences of their own recklessness, he did practically nothing to bail out the people who did the least to cause the crash – the ordinary people whom the crash hit the hardest. As home foreclosures ripped across the country, for example, there was only meager relief to bail out homeowners who were struggling with mortgage payments.

This shameless and hypocritical pandering to the wealthy and powerful while ignoring those in genuine need – what Noam Chomsky has dubbed “socialism for the rich, capitalism for the poor” – provided the first ingredient for Trumpism to emerge.

The second component was Obama’s brand of empty, tokenistic identity politics, which does little for actual working- and middle-class people. Rather, it enables well off, educated and ‘enlightened’ liberals to pass themselves off as progressives in spite of enacting policies geared to the interests of Wall Street, corporations, the wealthy, and the upper-middle class.

Obama’s presidency, if anything, harmed minority groups and set back the cause of ethnic equality. But his calculated and insincere posturing on complicated social issues, still delicate in the religious US society, nonetheless led to a false perception that he was granting special favors to disadvantaged groups. And unfortunately, for many white Americans (who, again, have themselves been victims of neoliberalism), this translated into a fear that the government was deliberately relegating them in the social hierarchy.

Trump then successfully seized on this anxiety, redirecting millions of Americans’ legitimate grievances toward marginalized groups like people of color, the LGBTQ+ community, atheists, immigrants and, above all, undocumented immigrants. His narrative said these somehow undeserving people had been unfairly winning at the expense of the historically privileged group in society. In a country with a long history of ethnic tension, white supremacy, and even lingering vestiges of slavery, building a political movement by whipping up misplaced resentment was ripe for the picking. This is especially so when many view politics as a ‘zero-sum game‘ (i.e. ‘if others are getting more, it must by definition mean that I get less’).

Obama’s obnoxious public persona was the icing on the cake. His smug, sanctimonious demeanor and lecturing, arrogant tone made him easy to dislike, which helped Trump to paint a (not entirely inaccurate) caricature of him as an insufferable establishment liberal with little care for anyone besides other established liberals (which is true) and disadvantaged groups (which is largely false).

The Democrats’ own fault

From the very beginning, Trump’s project was a cynical ploy to harness this groundswell of disaffection to cement (and intensify the protection of) the very same interests that Obama dutifully served: Wall Street, large corporations, the hyper-wealthy, and the upper-middle class.

But this doesn’t diminish the responsibility of Obama and establishment Democrats (whom he represents) in engineering this situation. And what’s worse, they never seem to learn.

In spite of a significant effort to pull the Democratic Party to the left, reports say centrists still dominate the roster of congressional candidates in the coming midterms. And if the Democrats don’t learn their lesson by 2020, Trump and his Republican minions will be able to sail to a re-election victory by drawing from the exact same playbook. Only by nominating genuinely progressive candidates like Bernie Sanders and Alexandria Ocasio-Cortez, who are untainted by corporate influence, can we hope to defeat the rotten neoliberal status quo that both Trump and Obama represent.

– See other articles about Donald Trump at The Canary Global. Also visit our Facebook and Twitter pages for more of our international coverage.