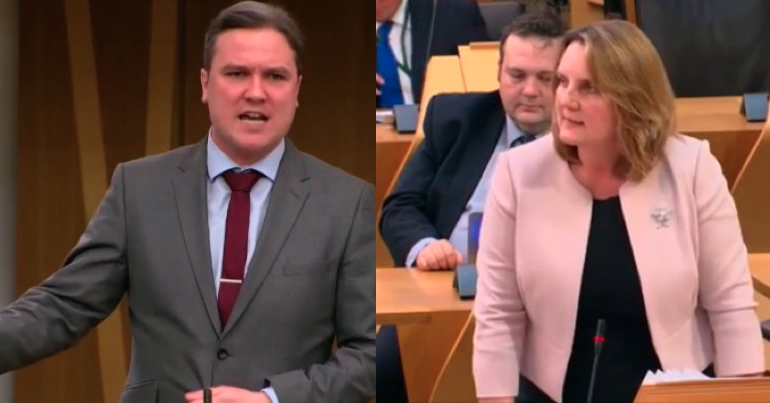 The member says that she is proud of the welfare reforms. Is she proud of the two-child limit and the rape clause?

These comments by Michelle Ballantyne are abhorrent and show the true views held by senior Tory MSPs – nasty and archaic. pic.twitter.com/IQgrK5arMb

Ballantyne claimed the “the two-child limit is about fairness”. She went on to say:

It is fair that people on benefits cannot have as many children as they like while people who work and pay their way and do not claim benefits have to make decisions about the number of children they can have. Fairness means fairness to everybody, not to one part of the community.

Campbell reacted with shock to the answer: 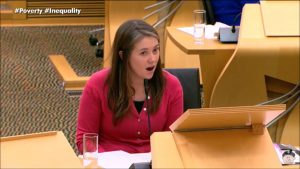 But even more ironic, as revealed by the National, Ballantyne claimed tax credits for all six of her children. It seems Ballantyne wants people who are poor to do as she says not as she does.

Later in the debate, SNP MSP for Renfrewshire South Tom Arthur took to his feet to take down Ballantyne:

? Tom Arthur to Tory Michelle Ballantyne: "To suggest that poverty should be a barrier to a family, that people who are poor are not entitled to any more than two children, what an absolutely disgraceful position" pic.twitter.com/w3dCgarLp2

He nailed the issues with Tory welfare cuts in Scotland and the “pompous” speech made by Ballantyne:

I have to say that in my two-and-a-half years in this parliament, the contribution from Michelle Ballantyne was one of the most disgraceful speeches I have ever heard. Six minutes of pompous Victorian moralising that would have been better suited to the pages of a Dickens novel.

And to suggest that poverty should be a barrier to a family, that people who are poor are not entitled to any more than two children — what an absolutely disgraceful position. And she should be utterly, utterly ashamed of herself!

Arthur also took a swipe at Scottish Labour and Scottish Liberal Democrats. He said that Labour sees the Scottish parliament as a “buffer” for Tory welfare cuts. He said:

Alex Cole-Hamilton [Liberal Democrat MSP] spoke about the Parliament having to mop up the consequences of Tory welfare reforms.

Arthur believes the Scottish parliament should have the powers to create fair “social security policy”. Not policies forced on Scotland by “colleagues of Michelle Ballantyne” in the Conservative party.

And Arthur is right. Scotland didn’t vote for a Tory government. But Scotland has the Tory welfare cuts imposed upon it.