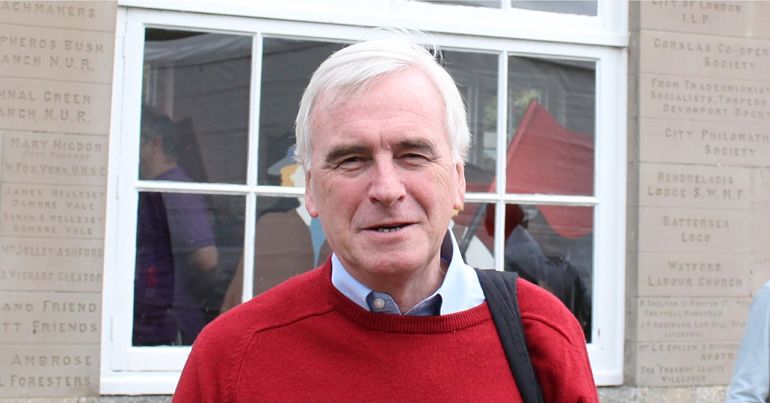 have simply shifted it onto the shoulders of NHS managers, headteachers and school governing bodies, local councillors, and police chiefs.

The shadow chancellor says that the Conservatives have actually moved the deficit onto public services and households:

Last year households spent on average £900 more than they earned, with the poorest households spending the most relative to their income. As a result British households are more indebted than those in the US, France, Germany, Italy or Japan, with unsecured debt at over £300 billion.

It’s worth noting that the very idea that we need to cut our way to prosperity is a demonstrable con. When Clement Attlee’s post-war Labour government founded the NHS and built over a million new homes – 80% of which were social housing – public debt was at 225% of GDP. It is currently at around 85% of GDP, showing that public debt levels are not a constant on public investment.

In fact, it’s the opposite. Calculated public investment actually helps reduce public debt. Between 1945 and 1980, public debt actually fell from 225% to 45% of GDP. The post-war creation of the welfare state cost money in the short-term, but brought returns in the long term. One reason why is that a welfare state redistributes money to the working and lower-middle classes, meaning there’s a huge increase in demand for services and products.

That investment can generate income for the public purse is also reflected in nations that, unlike the UK, have not dramatically shrunk the public sector since the 1980s. Relatively progressive Scandinavian governments – Sweden, Denmark, and Norway – were running budget surpluses before the 2009 crash, not after cuts, but on the back of a robust public sector and welfare system.

Now people are turning against cuts, Theresa May has ‘announced’ that austerity is over, but only in rhetoric. McDonnell is quite right to point out that the ruling government has only shifted the deficit onto struggling public services. The Conservatives’ whole dog and pony show amounts to a scam to serve their real constituency: the rich and powerful.