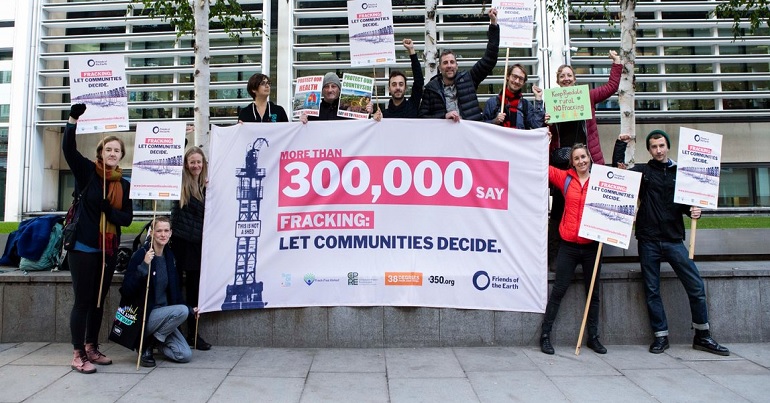 The public gave the government a bit of a wake-up call about fracking on Thursday 25 October. It came in the form of a massive petition; one signed by over 300,000 people.

Campaign group Friends of the Earth had organised the petition. The group delivered it to the Ministry of Housing, Communities and Local Government on 25 October; the same day a consultation over changes to planning laws for fracking closed. The petition told the government people wanted it:

to ensure that local councils retain their right to make planning decisions on fracking, and to not allow fracking companies to drill without planning permission.

Morning! Today we’re at @mhclg handing in a petition by more than 300,00 people who say NO to fast-track #fracking in England. @JBrokenshire, please #LetCommunitiesDecide! #WeSaidNo pic.twitter.com/KE0coZhGN5

Friends of the Earth campaigner Connor Schwartz told The Canary that the petition was to let the government:

know the strength of feeling against their idea to fast-track fracking. They want to relax planning rules so fracking companies can drill almost at will. None of this is right. And more than anything it flies in the face of what needs to be done if we are ever going to get to grips with the scale of change needed to fix climate chaos. The world’s leading scientists have warned, in the starkest terms, of the road we are headed down if we don’t get off fossil fuel dependency. So why is this government hell-bent on digging up and burning more fossil fuels?

The fracking industry is contentious. Many people are against it; not least because of its contribution to greenhouse gas emissions. It’s been linked to polluted drinking water and earthquakes. Studies also appear to show links to low birth weights, premature births, and a possible increased risk of breast cancer. The Canary has followed opposition from local residents where fracking has begun. And it’s been robust.

The Conservative government is moving forward with fracking anyway. A statement in May, then a policy paper in July, effectively gave the green light for firms to frack up and down the country.

But already, the government’s green light for fracking is causing uproar.

Preston New Road in Lancashire is at the centre of a row over fracking. Cuadrilla has permission to drill the site for shale gas, which has pitted it against local people. In July, the government officially gave Cuadrilla the go-ahead to start extracting shale gas. But the decision drew more protests from locals. Then, a judge jailed three activists (whom another judge promptly freed). But after a court case, bad weather and protests stopped it, Cuadrilla finally began work on Monday 15 October. This was met with more protests.

Then, the earthquakes began.

As The Canary has been following, the British Geological Survey recorded 11 tremors near to Preston New Road. These were between Thursday 18 and Wednesday 24 October. But the strongest of these, on 24 October, measured 0.5 in magnitude. This is classed as a red event on the government’s “traffic light” system for seismic activity:

But as Helen Rimmer from Friends of the Earth told ITV News:

Local people are very worried about this and are worried that this is a sign of… much more worrying and larger earth tremors that could be to come.

“We do need gas for energy security…but we have plenty of conventional gas…this is a new unconventional source that we don’t have the time to explore.The world’s top scientists have said we have to move away from fossil fuels." @HelenJqRimmer of @friends_earth re: #fracking. pic.twitter.com/k6sa3h6dCq

And Schwartz told The Canary:

Fracking may have only just started but it is deeply unpopular. In the last week there have already been a number of earthquakes in Lancashire. Also, the risks to local air quality and groundwater are well documented. Now the government is proposing to take away people’s say in whether fracking companies can get a foothold where they live. It’s time that we stopped opening doors for this risky industry and instead listened to the concerns of local people. We need to let communities decide.

So, we’ll have to wait and see if the government responds to the petition. But with chaos in Lancashire and huge public disquiet – how much longer can UK fracking last?