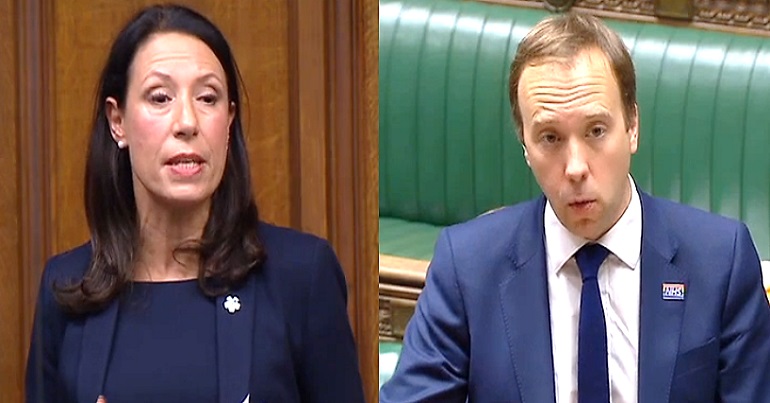 A Labour MP’s question in parliament invoked a dire response from a Conservative minister. And it pretty much sums up what the government thinks of our children.

Labour MP for Oldham East and Saddleworth Debbie Abrahams was speaking in parliament on Tuesday 23 October. She asked health secretary Matt Hancock about infant mortality in England. Her question was off the back of Office for National Statistics (ONS) figures. As it noted:

The infant mortality rate increased for the first time in five years to 4.0 deaths per 1,000 live births; the neonatal rate also increased by 3.6% compared with 2016, whilst the postneonatal rate remained the same.

She also raised a report that found infant mortality could rocket. And she challenged Hancock over this, asking:

what assessment has the health secretary done on the effects of next week’s budget on child health and longevity…?

Hancock’s response? That the government is “analysing” the information and:

It’s a very important issue that we are right across.

? WATCH: I asked the health secretary what assessments he's made about how next week's budget will help tackle infant mortality which has risen for the first time in 100 years – 4 in every 1000 babies born in the UK won't reach their first birthday – in Europe it's 2.8 per 1000. pic.twitter.com/DXWjFHDF9m

It is disappointing but sadly not surprising to be fobbed off with platitudes by yet another cabinet minister. The warnings made by the Royal College of Paediatrics and Child Health are stark. Unless corrected, infant mortality rates… will be 140% higher in England by 2030.

Instead of applauding ‘increased awareness’, [Hancock] should be making the case to the chancellor about the very real health effects of the government’s austerity agenda on children, as well as adults, ahead of next week’s budget.

As she points out, research has revealed a damning prediction for infant mortality rates. If they continue to rise, then by 2030 they will be 140% higher than some EU countries. As CNN reported:

The lead author of the report, Russell Viner, said this possible outcome is ‘pretty disastrous.’ He added that ‘this is a warning sign that things need to shift.’…

However, he added, ‘much of this is related to deprivation, poverty and inequality, which is higher [in the UK] than in the other European countries.’

But this is not the whole story. As The Canary previously reported, birth rates for the poorest people have been falling. This is while the rates for the richest people have been rising; although this doesn’t account for infant mortality. Couple that with the two-child limit on certain benefits. Then add around 4.5 million children living in poverty. Also throw in childhood obesity rates being highest in the poorest areas. Finally, include child mental health referrals being up 26% in five years.

The government has created a perfect storm for our children. From when they are born right up to school age, life is now on a knife edge. And as Abrahams said, all ministers offer is “platitudes”.