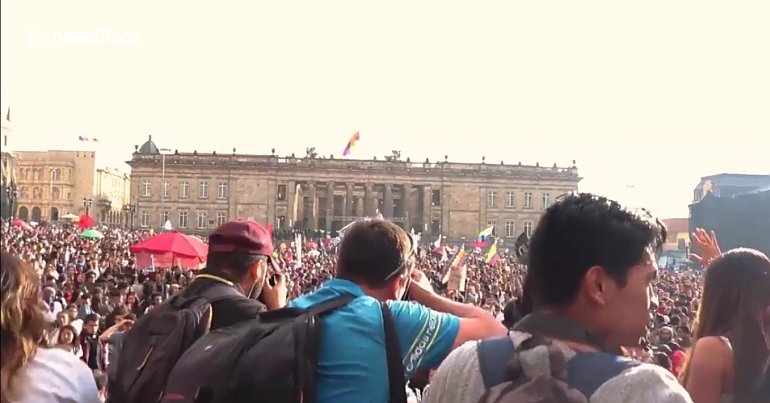 On 23 October, Colombia’s National Federation of Education Workers (Fecode) began a national strike in defence of public universities. The latest strike is part of a wave of protests that are rocking the new right-wing administration of Iván Duque, which look unlikely to end any time soon.

According to students gathered in Bogotá’s historic Plaza de Bolívar (Bolívar Square), the lack of funding in public universities is critical. Here is the full list of the students’ 10 demands (in Spanish). However, they are principally demanding an additional investment of COP$4.5bn, as well as a liquidation of prior debts.

And teachers are striking in solidarity.

While the teachers’ union has won some demands from the Colombian government, it claims “education still needs resources”. The wave of strikes is now in its third week.

The Canary hit the streets to find out more.

“Do you think you’ll win?” The Canary asked a student from Colombia’s National Pedagogic University. He responded: “We won’t stop the strike until our demands are met.” And that seems to be a common sentiment.

In addition to marches through many of Colombia’s main cities, two professors and one student are conducting a hunger strike.

The health of hunger striker Juan Carlos Yepes, a professor from the University of Caldas, is reportedly delicate:

Yepes has already lost five kilogrammes. But he claims he won’t change his position until talks with the ministries of finance, labour, and education are established by the government.

A strike in context

The current financial crisis in universities dates back to 1992. In that year, a law passed which said funding would not increase alongside significant increases in the student population, but along with inflation instead. As a result, while universities reportedly had to increase spending by 284% between 1993 and 2016, government funding has only increased by roughly 70%.

The president of the National University of Colombia has claimed that the 2018 academic year cannot be completed without extra money. Other universities have reported that they are on the brink of bankruptcy.

Progressive feeling on the streets

Political graffiti on the walls of Colombia’s National University, the country’s largest higher education institute, shows that the current strikes are not occurring in a vacuum. This graffiti reads: “Ideology of deceit: No. Free and feminist public education: Yes.” 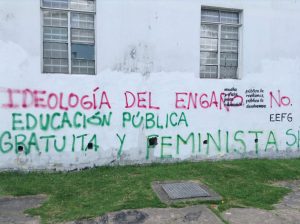 There is also strong anti-US sentiment within the student population. Many believe that decades of US intervention in Colombia have not been in the general population’s interest – and have contributed to widespread political violence. The following poster reads: “Yankees out. Down with the Trump-Pence regime. Confront the rightward shift with revolution, and nothing less.” 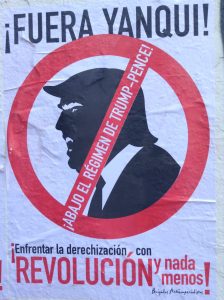 The placard below, meanwhile, reads:

If you take bread from my mouth, I’ll fight. If you deny me any form of education, I’ll fight…

Understand that, recently, the people are ‘violent’ for marching, blocking roads, and putting up posters. On the other hand, a state is not violent for disappearing people, awarding crimes, murdering comrades, violating rights, and denying us the chance to dream and educate ourselves.

It refers to an acute political violence in Colombia which, despite the peace process, continues today. 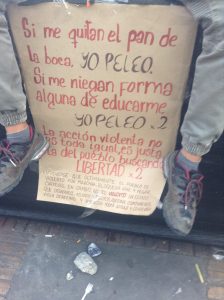 – Read more of our coverage of Colombia and Latin America.