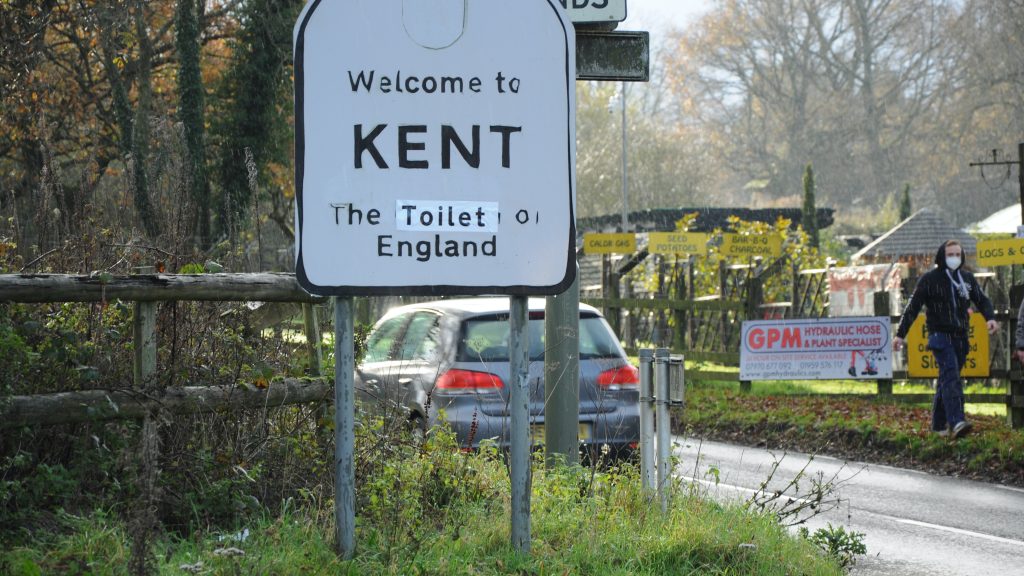 Activists behind an anti-Brexit stunt that rebranded Kent as the “Toilet of England” have said police have better things to do than investigate their prank.

Signs across the county were changed by a group of campaigners opposed to Brexit. Where before motorists would be politely informed they were entering the Garden of England – as Kent is known – the new message read:

Welcome to Kent The Toilet of England.

The stunt aimed to highlight fears of huge lorry queues along the county’s motorways, with suggestions that portable toilets will have to be installed on roadsides for use by delayed drivers.

Kent Police said they have been made aware of “criminal damage” to road signs in the county and inquiries are continuing.

A member of the activist team, known collectively as EU Flag Mafia, hit out at the idea of officers devoting time to the stickered signs. They told the PA news agency:

We acted on behalf of the residents of Kent. Everyone who was involved in placing ‘Toilet’ on the road signs lives in Kent and we reject any suggestion that any damage was done to any of the road signs – the stickers can be removed very easily.

If any Kent resident feels offended, we suggest they simply remove the stickers. We suggest that Kent Police have better things to be doing with their valuable time, like trying to work out how the people in Kent will be still be able to travel around the county while thousands of lorries are gridlocked in jams around the county.

The cloak-and-dagger operation – which activists stressed was compliant with coronavirus (Covid-19) guidelines – covered around 30 road signs stretching from Dartford near London to the border with East Sussex.

Cabinet Office Minister Michael Gove has previously warned that queues of up to 7,000 trucks could form in Kent unless businesses do more to prepare.