Obama's halo is slipping, and that's a good thing - The Canary 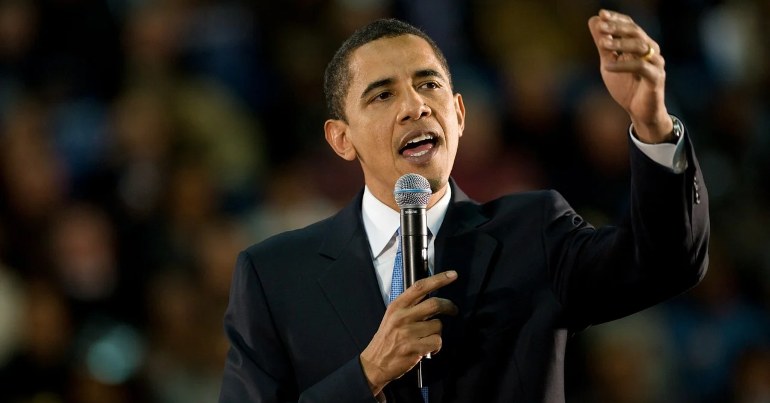 One of the major chapters in the so-called ‘Russiagate’ saga recently came to an end, sparking the beginning of what has become known by some as ‘Obamagate’. US president Donald Trump has been reacting in his usual manner. But on this occasion, as with many others, Barack Obama and the liberal establishment are largely being given a free pass in the mainstream media. And that needs to be called out also.

On 7 May, the US Justice Department dropped most of its charges against former Trump administration national security advisor Michael Flynn. Flynn had been under investigation for his alleged role in possible foreign intervention in the 2016 US presidential elections. In the following days, Trump took to Twitter to gloat about how this somehow vindicates him from all charges.

He took particular aim at former president Obama. Shortly before Trump’s Twitter outburst, Obama had himself criticized the Justice Department’s decision to acquit Flynn. This has fed into a conspiracy theory peddled by Trump and his supporters that holds that Obama deliberately orchestrated the investigation in the final weeks of his presidency in order to sabotage Trump’s incoming administration.

To be sure, this kind of paranoid thinking isn’t helpful to public discourse. But corporate-owned liberal media’s treatment of Obama obscures the fact that his administration was not much better than Trump’s. Obama’s record throughout his two terms in office included:

Not only did these policies cause huge harm in-and-of-themselves; they also set the stage for a right-wing faux-populist like Trump to triumph in the 2016 election. Trump won the electoral college vote, in spite of being clearly unfit to serve as president, by successfully tapping into the legitimate anger of many who felt let down by the Obama administration.

He argued (correctly) that for decades the establishment wing of the Democratic Party has been beholden to special interests rather than its historic working- and middle-class base. Trump even ran to the left of both his own party and Democratic rival Hillary Clinton on issues like foreign policy and trade. For instance, he (dubiously) claimed that he had always opposed the Iraq War and pledged to pull the US out of the North American Free Trade Agreement (NAFTA).

Feeble opposition in the age of Trump

Since Trump’s election, meanwhile, establishment Democrats have largely failed to oppose some of his worst policies. From his recognition of Jerusalem as Israel’s capital to ‘regime change’ in Venezuela, party leadership figures such as Nancy Pelosi and Chuck Schumer have been walking in lockstep with Trump’s administration. But given widespread disapproval of his administration by large sections of the US public, they nonetheless have had to conjure the image that they are opposing him.

This has largely taken the form of petty sectarian squabbles such as the alleged Russian interference in the 2016 election. As Noam Chomsky has pointed out, even if the worst charges are true (which is itself unclear) this interference would be “not even a joke” compared to what the US consistently does to other countries around the world. The Intercept‘s Glenn Greenwald, meanwhile, has described the coverage of the Russian interference investigation as “the saddest media spectacle I’ve ever seen”.

Clearly, Trump is not really an aberration. Like other right-wing faux-populists, his is rather a natural consequence of the failure by traditional center-left parties to offer a genuine alternative to the neoliberal / imperialist status quo.