Trump steps up attacks on Bernie Sanders, showing just how scared he really is - Canary 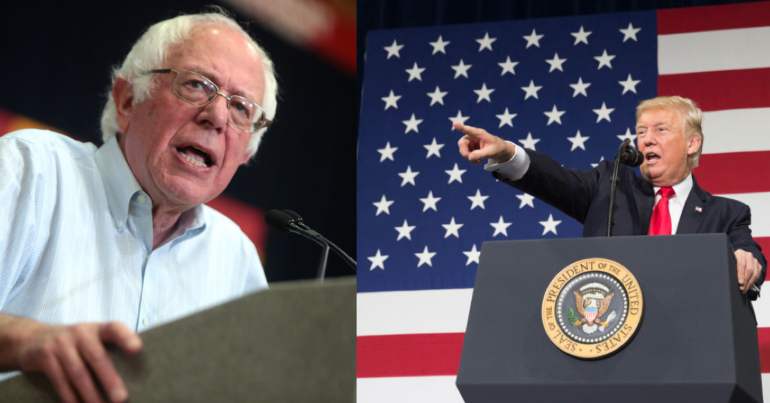 With the US presidential election approaching in 11 months’ time, Donald Trump is going into attack mode. But he has a new target. Whereas previously he and his backers were focusing on Democratic Party establishment favourite Joe Biden, they are now homing in on democratic socialist Bernie Sanders. This can only mean one thing: they fear that he will win his party’s nomination. And they’re right to be scared. Because there’s strong evidence that he stands the best chance of beating Trump.

On at least two occasions since the turn of the new year, Trump has singled out Sanders for criticism. On 9 January, he attacked him for opposing the assassination of Iranian general Qassem Soleimani. Because Sanders spoke out against this transparent act of political murder and flagrant violation of international law, Trump claimed that he “can’t be trusted to defend American lives”.

Trump also went on the attack with a classic ‘liberal hypocrite’ propaganda line which is a complete and utter fallacy. He described Sanders as a “wealthy, fossil fuel-guzzling millionaire” who “lectures Americans on how to live their lives while doing the exact opposite”.

This represents quite a change of tack. After all, up until now the strategy of the Trump administration and much of the corporate-owned press has been to simply ignore the Sanders campaign. The change comes as there is growing evidence that Sanders could win the nomination.

Why is Donald Trump attacking our campaign?

Because we are the strongest campaign to defeat him, and he knows it. https://t.co/IoNbIAQu1q

A poll released on 10 January shows that Sanders is now leading the field of contenders in the crucial Iowa primary contest. This small Midwestern state has long been the first to hold a primary for both major US political parties, making its outcome an important bellwether for the primary process as a whole. The poll shows Sanders has the support of 20% of likely voters, with close contender Elizabeth Warren on 17%.

The findings came shortly before the first Democratic primary debate of 2020, which took place on 14 January. For the first time, there were visible divisions between Sanders and Warren. In particular, there was a heated exchange regarding a private conversation between them in which Warren claims Sanders said he ‘didn’t believe a woman could win the presidency’ – something Sanders denies.

On the debate stage, Sanders reiterated his denial, insisting:

Well, as a matter of fact, I didn’t say it… Anybody [who] knows me knows that it’s incomprehensible that I would think that a woman cannot be president of the United States.

He also pointed to the danger of allowing division to be sown between progressives. He said:

I don’t want to waste a whole lot of time on this, because this is what Donald Trump and maybe some of the media want.

Warren’s attack on Sanders is completely unfair. Because Sanders has one of the strongest records on gender equality issues amongst members of congress. Consequently, it’s also counterproductive, as it cynically weaponizes the serious problem of gender inequality – which is ignored and exacerbated overwhelmingly by the political right – to attack someone who has long been fully aware of the extent of the problem.

And this is not the first time that the gender card has been dealt from the bottom of the deck in order to attack Sanders. During the 2016 Democratic primary, then-candidate Hillary Clinton used the exact same tactic by implying that a large bulk of Sanders supporters were sexist – calling them ‘Bernie bros’. Now, a second primary contest risks getting marred by the weaponisation of sexism allegations.

With an increasingly out-of-control White House led by a sexist bigot with overt fascist tendencies, the stakes are too high for Democrats to get bogged down with infighting – especially when the evidence that Sanders is the best person for the nomination is overwhelming.

Sanders is the best bet to beat Trump

In the aftermath of 2016 presidential election, multiple polls – including one from Fox News – found Sanders to be the most popular politician in the country. There is also strong evidence that, had Sanders won the nomination, he would have beaten Trump. And more recent polls consistently show him as the candidate who fares best against him in most state contests.

The fact that Trump and his backers are now in attack mode, meanwhile, is perhaps the ultimate indicator that Sanders is best placed to defeat him in this year’s election.