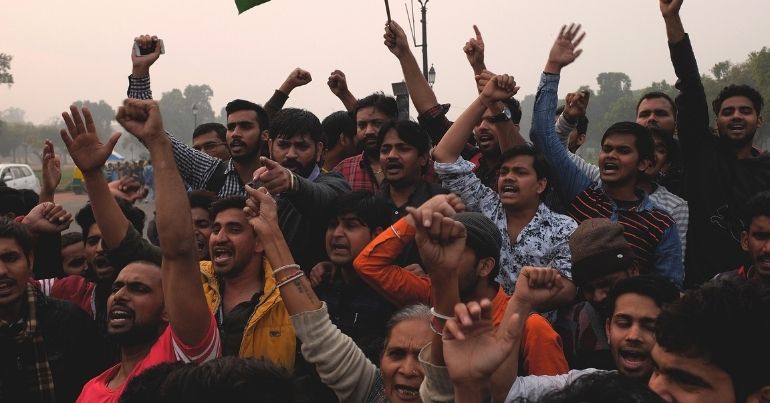 250 million workers and farmers rose up against Indian prime minister Narendra Modi’s anti-worker, anti-farmer policies in a joint general strike on 26 November. The nationwide action came after a 24-hour workers’ strike on 8 January, which saw over 250 million workers protesting Modi’s draconian legislation and plans for widespread privatisation. Mass protests continue, with farmers stationed in Delhi demanding a response from the government.

The struggle for workers’ rights

According to reports, the states of Kerala, Puducherry, Odisha, Assam, and Telangana were shut down as a result of the “All India strike” in November. Peaceful protesters called on the government to withdraw laws impinging on workers’ and farmers’ rights, and to end widespread privatisation of public sector industries. They also called for the institution of a broad range of workers’ rights, including a state pension for all, and an end to forced premature retirement. In state attempts to repress the strike, protesters were met with police violence and arrests.

On the day of action, farmers marched on Delhi and presented their demands to the government. Hundreds of thousands remain in Delhi, demanding a response. Trade union leaders are of the “unanimous opinion that all the three anti-farmer and pro-corporate farm laws must be repealed”.

While union leaders have been in negotiation with India’s government, it’s become evident that the state doesn’t intend to repeal the draconian laws in question. Demonstrations are due to continue, with protest leaders calling for a “nationwide shutdown” on 8 December.

India has experienced the second-highest coronavirus infection rates in the world, with over 9.2 million people infected. This has devastated the economy, generated widespread unemployment, and exacerbated poverty nationwide. Concerned by the government’s “mishandling of Covid-19”, protestors are also calling for safer working conditions to limit the spread of the virus.

Despite the “All India strike” being the biggest strike in global history, reporting by mainstream media has been notably absent. However, 36 British MPs, including Jeremy Corbyn, Valerie Vaz, and Nadia Whittome, have written to foreign secretary Dominic Raab, calling on him to confront India’s government about the controversial farm laws.

This mass movement of workers from India’s major industries demonstrates the collective power of working people. The Indian people’s ongoing struggle for workers’ and farmers’ rights warrants recognition and solidarity on a global scale.