Biden surges to double point lead over Trump. But here's why that's nothing to celebrate. - Canary 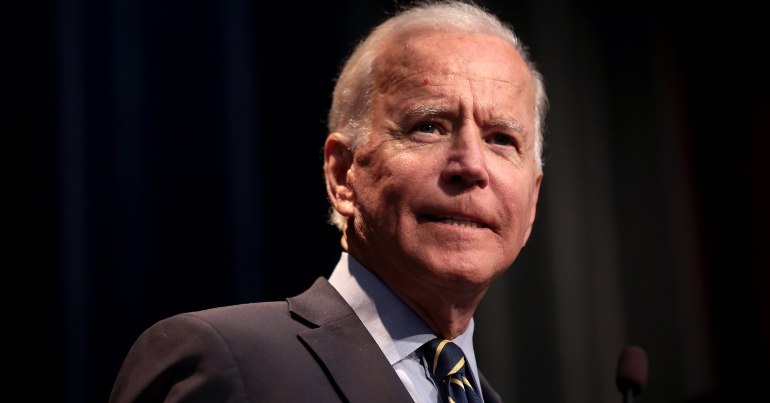 Presumptive Democratic Party nominee Joe Biden now holds a double-digit poll lead over president Donald Trump in the US presidential election race. Such an insurmountable lead makes an end to the Trump era seem all but inevitable, even at this early stage of the campaign. But progressives have little to celebrate. Because although the Trump presidency has been a sordid compendium of reactionary policies and shocking incompetence, a Biden presidency would represent a return to a status quo of neoliberalism and imperialism-lite that’s little better than its fascistic Trumpian cousin.

On 23 June, a Harvard CAPS/Harris Poll survey found that Biden has increased his lead over Trump amongst likely voters to 12 percentage points – about double the lead of the previous poll taken last month. 56% of respondents indicated they would back Biden while only 44% said they would vote for Trump. The poll adds to a dark picture for Trump’s chances of re-election in November. Similar polls conducted in the crucial swing states of Florida, Michigan, and Wisconsin also show Biden in the lead.

Trump appears to have haemorrhaged support following his lacklustre handling of the coronavirus pandemic and heavy-handed response to the protests sparked by the killing of African-American George Floyd. The Harvard CAPS/Harris Poll survey also found that 57% of respondents disapproved of Trump’s performance in office, compared to 43% who approve.

But a Biden victory would be no deliverance from evil

Of course, any public realisation that Trump is both useless and dangerous should be welcomed. Because his performance in office lately has indeed been diabolical. The US holds the dubious distinction of accounting for a whopping 30% of the world’s coronavirus infections in spite of having just over 4% of the world’s population. Meanwhile, a considerable, though as yet unknown number of people have died during the protests that followed George Floyd’s death. Countless more have been injured including an Australian journalist who was blinded in one eye by a plastic bullet fired by police in Minneapolis.

But the idea that Biden is the solution is equally wrong. For starters, his progressive credentials are paper-thin. The evidence is overwhelming that throughout his political career he has supported numerous reactionary policies and cosied up to some of the most deplorable characters in the US congress.

In June of last year, for example, letters emerged showing that Biden actively sought the support of segregationists to oppose efforts at school integration. This shouldn’t come as a great surprise, however. Biden once described the notorious arch-racist Strom Thurmond (who tried to block the passage of the Civil Rights Act in the 1960s) as “one of my closest friends” and even delivered a fawning eulogy at his funeral.

Meanwhile, in January of this year, video footage emerged of Biden openly boasting in public about how he fought to cut social security spending in congress. His supporters, such as Maya Contreras, have desperately and pathetically attempted to claim that this footage was somehow ‘taken out of context’ even though this is patently not the case. One only has to watch it oneself.

‘Often more extreme than the Republicans’!

As The Canary learned earlier this year from author Branko Marcetic, Biden’s stances on issues like immigration, ‘law and order’, and foreign policy have at times been further right even than his Republican Party rivals. As Marcetic put it, he was “often more extreme than the Republicans that he was trying to out-posture in these instances”. He added:

On immigration, Biden, like many Democrats… voted to enable the powers that Trump and Obama have used to launch the… deportation state…

he also was the architect of the foreign policy that accelerated the migrant crisis coming out of Central and South America.

A large factor in the latter was Biden’s support for the disastrous North American Free Trade Agreement (NAFTA). In addition to contributing to a migration crisis in which millions fled Mexico due to falling living standards, NAFTA also decimated the US’s manufacturing ‘rust belt’ heartlands. Ironically, establishment Democrats’ support for NAFTA was one of the reasons that Trump gained support among the white working class in crucial swing states like Wisconsin and Michigan.

As if this weren’t damning enough, Biden will forever be sullied by the fact that he served as Barack Obama’s vice president. As The Canary has reported on multiple occasions, Obama’s presidency not only failed to deliver on his lofty promises of ‘hope and change’, but rather was largely a continuation of the policies of his predecessor George W Bush. This included keeping Bush’s bank bailout program in place and multiplying his drone assassination program by a factor of ten. (For a detailed analysis of Biden’s record in office, see here.)

Astonishingly, during the Democratic primary contest, Biden expressed incredulity that his progressive rivals (particularly Bernie Sanders) were critical of Obama’s record. On 31 July 2019, he said: “I’m proud of the job [Obama] did. I don’t think there’s anything he has to apologise for and, I think, it kind of surprised me the degree of the criticism [from the other candidates]”.

Who stands to gain?

The explanation for Biden’s sordid record is straightforward – one only has to pose the question “who stands to gain?”. As The Canary has previously reported, Biden has been sucking at the corporate / billionaire teat from the moment he entered politics. And his latest (third) attempt to win the presidency has been no different. He has already received millions of dollars in campaign contributions from his billionaire and corporate backers – much of it before he even won the Democratic primary. So far, he has received support from at least 94 billionaires and their spouses. Meanwhile, at least 20 powerful corporations, such as the vulture capitalist firm Bain Capital, have given Biden’s campaign millions of dollars in contributions.

Needless to say, the wealthy corporations and individuals that have bankrolled him haven’t done so out of the goodness of their hearts; they expect something in return. And if Biden gets elected, they won’t be disappointed – throughout his career he has dutifully served as a loyal minion of corporate and military-industrial complex interests.

Fortunately, there is a genuine progressive in the presidential race who shuns corporate donations and advocates radical reform to the US’s broken economic and ecological paradigms. On 21 June, Howie Hawkins officially secured the nomination of the Green Party of the United States to be its candidate in this year’s presidential election. Following his victory, Hawkins stated:

This is an opportunity for people to vote for what they want.

Whereas Hawkins rejects both Trump and the Democratic Party establishment wing’s neoliberalism-lite, Sanders has sadly endorsed Biden and put his weight behind his campaign. As progressive commentators including Glenn Greenwald have pointed out, as long as the left opts to vote for the ‘lesser evil‘, then it will forever get taken for granted and, in turn, give its power away. The Canary interviewed Hawkins in May to discuss his policies and strategy. And he was unequivocal that compromise is a failed strategy:

The Democratic Party is where progressive movements go to die. … [if] you get behind Biden and you’re on the left, you get lost in the sauce. [The media and politicians] don’t know you’re for the stuff Bernie Sanders was for – you voted for Biden. …

Don’t waste your vote on that, make yourself heard, everybody knows what the Green Party stands for. And make the politicians, make the media come to you.

Sanders should never be forgiven for supporting the reactionary Biden. By doing so, he has played into the establishment liberal narrative that everything was hunky-dory until Trump came along. But the reality is that, far from representing some kind of aberration, Trump is only the latest fascistic version of a neoliberal and imperialist status quo that has been upheld for decades by both major US political parties.

Moreover, this status quo is exactly what paved the way for a far-right, faux-populist like Trump to win in the first place. Although his political career has been a transparent con job, he did at least articulate the fact that Washington has become completely beholden to private interests – even though he has done nothing to make the situation any better (and if anything has made things worse).

It is this status quo that is the disease, not Trump. His presidency is just a marginally more malignant episode in a decades-long saga of death and destruction abroad and corruption and misery at home. Although Biden currently seems best placed to win on 4 November due to Trump’s sheer incompetence of late, he deserves not a single progressive’s vote. If he wins on 4 November, the need for radical change will be as strong as the day before. The left needs to organise, mobilise, and prepare for war against the murderous status quo – regardless of which of its rival factions happens to be in power.