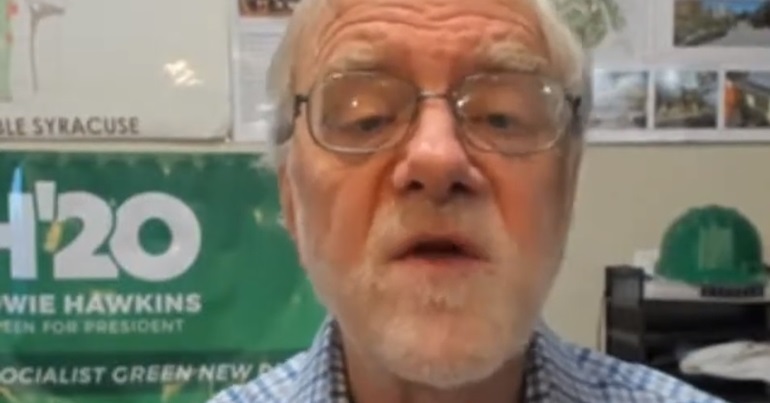 The failure of Bernie Sanders’s campaign to win the Democratic Party primary contest was a devastating disappointment for those wishing for meaningful political and economic change in the US. Short of a contested convention, center-right establishment figure Joe Biden will now be Donald Trump’s Democratic opponent in November’s election.

But while Sanders is out of the running, there will still be a progressive on ballots across the country. Because the Green Party will be running a presidential candidate – as it has for the last 24 years.

In an exclusive interview, The Canary spoke with Howie Hawkins, who is currently leading the Green Party primary with victories in 20 states – making him all but certain to win. Hawkins discussed his policy platform, his history of involvement in multiple social movements over many decades, and what role he hopes his campaign will play in the November election.

Hawkins told The Canary how he’s “been an activist since the 1960s”, fighting for civil rights, peace, and the environment. After the escalation of the Vietnam war following the 1964 election, he came to the conclusion that “we need a party of working-class people to support participatory democracy, democratic socialism, ecology”. So he backed “third-party efforts until we had our first national organizing meeting for the Green Party, to which I was invited”.

Speaking about the present day, he stressed that:

We want to have a united front of the non-sectarian, independent left. I think most progressives and socialists who have had it with the Democratic Party don’t want to see the little left groups fighting with each other.

our real objective is to get the people that haven’t been voting, because they’re alienated from both of the corporate parties, [out to the polls]. A hundred million people didn’t vote in 2016 – working-class people, people of color, and young people predominately… And those are the people we really want to reach and organize.

Hawkins listed the “three life-or-death issues” at the heart of his campaign as “climate, inequality, and the new nuclear arms race”, adding that “now we have a fourth with this coronavirus [Covid-19] pandemic, which is now an economic depression as well”. Central to his climate policies is a ‘Green New Deal‘, of which Hawkins was an early advocate:

Of course, the climate meltdown is a life-or-death issue… I was the first candidate in this country to campaign for a Green New Deal back in 2010 running for governor of New York. And we have a full-strength Green New Deal in the Green Party – it was our signature issue in the 2010s. …

So I’m calling for an eco-socialist Green New Deal because we’ve got to make this transition in the next decade, zero-to-negative carbon emissions, and 100% clean energy by 2030.

He then stressed that:

Inequality is killing us. Working-class life expectancies are declining in the United States. It’s unheard of for a developed country. …

And so [our campaign platform has] an economic bill of rights to set a floor – everybody should have the right to a living wage job, an income above poverty, affordable housing, comprehensive healthcare, a lifelong public education, and a secure retirement.

the United States should take disarmament initiatives to reduce the tensions [with Russia and other nuclear powers], cut military spending 75%, start withdrawing from these 804 military bases, get out of these seven endless official wars, and stop doing special operations in just about every country in the world every year. And then pledge ‘no first use’ of nuclear weapons, disarm to a minimum credible deterrent, and then go to the nuclear powers and say ‘we want complete and mutual nuclear disarmament’.

Hawkins was keen to emphasize that his platform is staunchly eco-socialist in orientation:

We want to extend democracy into the economy. And you really can’t have political democracy without economic democracy, because that concentrated economic power that the billionaire class has translates into concentrated political power. …

So you’ve got to democratize the wealth. And that means large corporations should be public utilities. In the private sector, we want to encourage cooperatives. And we need strategic planning of the key sectors … in the transition to clean energy and zero-to-negative carbon emissions.

corporations are private tyrannies and they dominate the government. And then we get decisions that aren’t even made in the market. They aren’t made by voting. They’re made by military-industrial elites. Like the decision in the 50s to go nuclear instead of solar.

And he explained how his universal public healthcare plans would differ from the UK’s NHS:

we should go immediately to national health insurance where you have a single public payer to pay for all medically necessary services. It’s a lot more efficient; we can cover everybody at lower cost…

[But] unlike the UK, I believe, we want to have this democratically controlled from below by having local health districts with locally elected health boards – two-thirds elected by the general public, one-third by the healthcare workers – so that we can make sure all communities have the healthcare resources they need and we’re rationally allocating resources.

The hostile media environment and the ‘spoiler’ charge

Regarding whether the coronavirus pandemic might have whetted voters’ appetites for significant political and economic change, Hawkins said:

I think people see that both governing parties are presiding over a failed state. …

So that gives us an opportunity to step into that vacuum and point the way to these solutions. And I’m hopeful we can do that. But … between the far-right Republicans, and the center-right Democrats, and all the money they’ve got, and all the media that pays attention to them and not us, it’s going to be a battle.

Some will claim that third-party candidates end up as ‘spoilers’ – i.e. paving the way for the Republican candidate to win by siphoning off votes from the Democrats. But Hawkins stressed that “no, the Democrats are spoilers”:

Because we’ve given them a proven nonpartisan solution to the problem of spoiling; and that is get rid of the electoral college and go to a ranked-choice national popular vote for president.

To get attention from a hostile establishment media, meanwhile, he insisted that “we’ve got to be interesting”.

Organizing and the Sanders movement

this is what I‘ve been trying to tell the Green Party and all the Bernie people that have been coming to us and… unaffiliated socialists and progressives out there: ‘We will never have a left party that is a major party and force until we go out and organize’. …

And when we have local party chapters in [marginalized] communities, where people hear the nonsense about us in the corporate media but know us locally and say ‘no, that’s not right, we know these people’, … it [won’t] matter what the corporate media says because we’re on the ground with the people.

He also argued that the ‘insider strategy’ of Bernie Sanders in the Democratic Party was unlikely to ever succeed, insisting:

he demonstrated why that strategy doesn’t work. The corporate Democrats make the decisions. But they like the progressives to go out and make speeches because it draws in progressives. And without an independent left, the corporate Democrats take those progressives for granted. So Bernie would have been stronger – particularly after doing one try through 2016 – to go independent. He had the name recognition, the stature. He would have rallied a lot of people to him and really helped establish an independent force on the left that couldn’t be taken for granted.

Hawkins added that independent progressive candidates can have a powerful influence on the election and policy even when they don’t win, stressing that:

our goal is to win elections, ultimately. But we don’t have to win the office to move the debate. I got 5% running for governor of New York in 2014. Andrew Cuomo, the governor, wanted to run up the vote to prepare the ground for a run for president. …

He couldn’t take our 5%, 200,000 votes, for granted. And so what he decided to do was label himself ‘the pragmatic progressive’ and adopt three of our demands which he had never supported: a ban on fracking in New York, a $15 minimum wage, and paid family leave. So we had leverage just with 5% of the vote. And that’s been the historic role of third parties; they put issues on the table

Hawkins also explained that the Sanders campaign did at least do something similar in terms of bringing the issue of universal healthcare back into discussion within the Democratic Party:

We saw how Bernie Sanders changed the debate inside the Democratic Party… And that has changed our politics. So, for example, national health insurance, what they call single-payer or Medicare-for-all, is a real term of debate. …

Building an independent presence throughout the US

Hawkins also pointed out that his candidacy will help to improve the prospects of Green Party candidates running for more minor positions:

we have other goals, and this goes toward building the party. Ballot access – in about 40 of the states, how many votes our presidential ticket gets determines whether the party will be on the ballot for the next election cycle. And that’s important for running local candidates – both for city, and county, and town boards, but also local districts of state legislatures and congress. …

if we’re going to build an independent party on the left, we’re going to have to elect thousands of people as we go into the 2020s – in the local offices and local districts of state legislatures and then congress. And so the ballot lines are very important.

He added that other goals for his campaign include qualifying for the televised debates (which usually include just the candidates from the two major parties) and qualifying for ‘matching funds’ that are available for campaigns that meet a certain fundraising threshold.